MET Éireann has issued a status orange weather warning for all Irish coastal counties; including Dublin, Louth, Wexford, Wicklow, Meath, Waterford, Donegal, Galway, Mayo, Sligo, Clare, Cork and Kerry. The rest of the country has been issued with a status yellow warning.

It comes as Storm Callum moves across the Atlantic Ocean towards Ireland, bringing with it strong gales and heavy rain. Meteorologists say the storm will make landfall tonight, and will continue into Friday morning.

Where will it hit and when?

The orange warning will first come into effect in Munster, before moving up through the country. MET Éireann has provided additional weather information for the following regions: 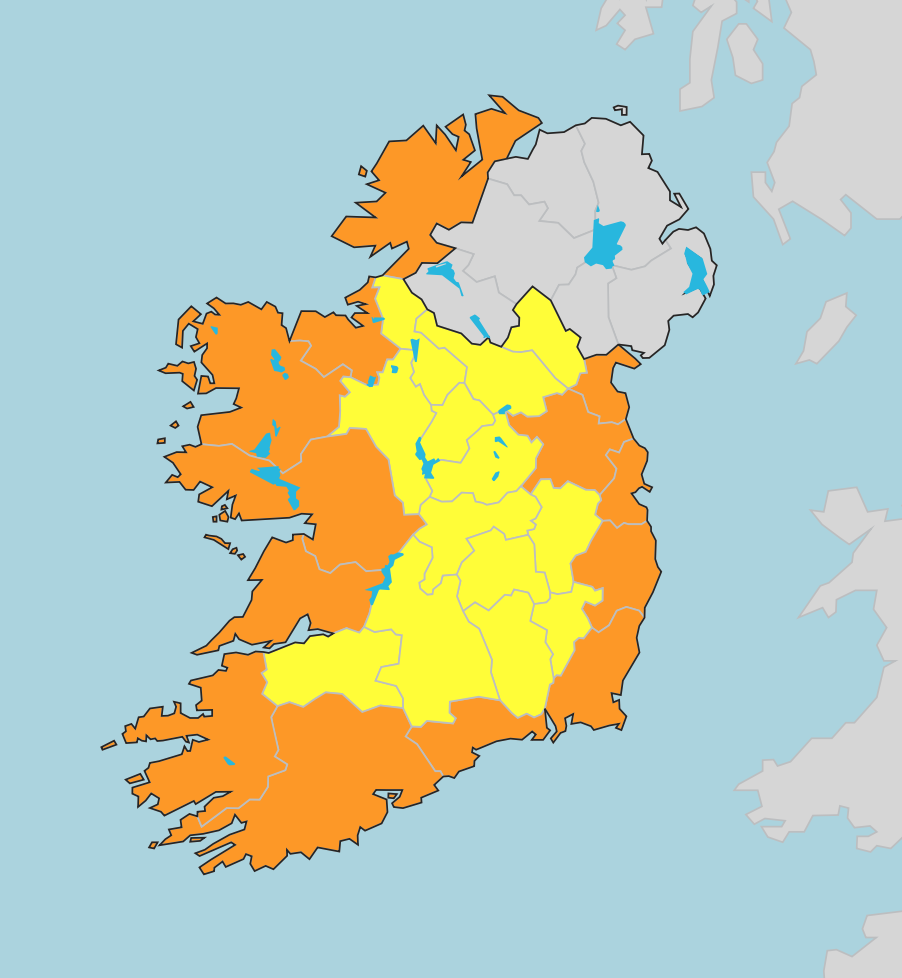 Southeast winds (veering southwest) will gust between 100 and 130km/h, higher in some coastal areas and on high ground. As well as heavy rain and high tides, there is a risk of coastal flooding and damage. This warning is valid from 10 pm on Thursday 11th October to Friday 12th October at 9 am.

Dublin Fire Brigade has warned families to: “Make sure you stock up on batteries or charge them should there be a fault in electricity during #StormCallum. We do not recommend real candles,” they added, “you should use LED alternatives. Are you sorted? How about vulnerable family, friends and neighbours?” They have also requested people secure (or lock away) patio furniture, trampolines and wheelie bins.

“If the road ahead is flooded choose another route, do not attempt to drive through it.”

What’s more, the Department of Housing said, “The National Emergency Coordination Group (NECG) will meet today at 3 pm to review the preparations underway for #StormCallum and will hear from local authorities, key agencies and government departments.”

Meanwhile, the Road Safety Authority of Ireland has asked drivers to be cautious when out on the roads as there is a risk of flooding. “If the road ahead is flooded choose another route, do not attempt to drive through it,” they said. As for pedestrians and cyclists, ensure you are wearing hi-vis clothing to increase drivers’ ability to see you.

“Stay away from exposed beaches, cliffs and piers, harbour walls and promenades…”

The Department of Culture, Heritage and the Gaeltacht have also advised members of the public to stay away from national parks, monuments and reserves in any county with a status orange warning. Moreover, the Irish Coast Guard has “strongly advised” the public to stay away from exposed beaches, cliffs and piers, harbour walls and promenades along the coast during storm conditions.

Galway City Council is installing an 80-metre portable dam at the Spanish Arch in an effort to protect the area from flooding. A temporary floodgate has also been installed ay Salthill.

As Storm Callum will only make landfall overnight, the full effect of it will not be known until morning. With a risk of fallen trees, damage to property and flooding, government officials fear some schools may be forced to close. The National Emergency Coordination Group (which consists of government officials, MET Éireann, local authorities, the ESB and the OPW) are meeting today to discuss this possibility and determine a plan of action.

According to the Independent, forecaster Deirdre Lowe said they are “more than likely going to extend the weather warnings, as it will take a while for winds to abate.” MET Éireann is monitoring the situation closely and will update their weather warnings accordingly. For more information, see met.ie.

Photo by Hannah Domsic on Unsplash