Hollywood’s hardest working woman, Sarah Paulson is finally getting the recognition she deserves. In the June issue of IMAGE, on shelves now, she talks to HOLLY O’NEILL about her latest role and why she’s not surprised Tinseltown called for Time’s Up.

Last year, Sarah Paulson had a very good year indeed. She took centre stage for her Emmy- winning performance as prosecutor Marcia Clark in American Crime Story: The People v. OJ Simpson. Then, among CEOs and presidents, Time Magazine named her one of the 100 most influential people of the year. “In remaining true to her distinct voice, she has been at the forefront of a generation of women who are changing the landscape of the film and television industry,” wrote Cate Blanchett in Time. Since then, we’ve seen Paulson in Steven Spielberg’s The Post alongside Meryl Streep and Tom Hanks, play three different characters in American Horror Story: Roanoke and next up, alongside Blanchett, she’ll be changing the landscape again in Ocean’s 8. The all-female remake, starring Sandra Bullock, Cate Blanchett, Anne Hathaway, Mindy Kaling, Awkwafina, Rihanna and Helena Bonham Carter, is set to smash the glass ceiling on that most male-orientated of movie genres – the heist comedy action blockbuster. 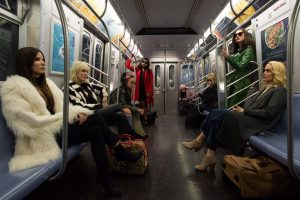 Since the first trailer for Ocean’s 8 was released last December, it has had 11 million YouTube views, 103k positive votes and 55k negative ones. In the top ten comments, you’ll find men wailing, “Absolute rubbish! What’s next? Fight Club: All female edition, Joanna Bourne, maybe even The Godmother?” and “Political correctness at it again. Stop ruining our films.” It sounds like I made that up. I really didn’t – Google it.

It’s generally accepted that YouTube comments are where humanity goes to die. But was the ludicrous toxicity of 2016’s reboot of Ghostbusters anticipated? The reactions are news to Paulson. “I wasn’t aware of it. What I experienced was most people being like, ‘ That’s a great idea!’ and being very excited. If anybody did say anything, they certainly kept it away from me. And I stayed away from Google.”

As the tired narrative of the all-female casting goes, reports of the cast “feuding” and “butting heads” on set soon followed. The long-perpetuated myth, in this case, was just that. “We all have a really wonderful camaraderie with each other. I think we knew how special what we were getting to do was and the rarity of it. All of us wanted to just enjoy that experience as much as possible because those opportunities don’t come around that much, to be around such smart, fierce, funny, strong women, all in the same movie and all in the same hair and make-up trailer.” 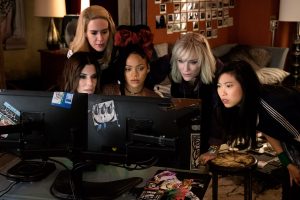 At the end of last year, misogyny graduated from YouTube comments to the headlines as harrowing accounts of sexual assault allegations from movie tycoon Harvey Weinstein went from open secret to global news, the seismic ripple effects of which are still being felt around the world eight months later. The #MeToo social media movement that followed called out abuses of power and Hollywood wore black in support of Time’s Up, stating that time was up on systematic inequality from the big screen to the boardroom. What’s it like to have your industry upended overnight? Sarah Paulson is earnest in saying it didn’t surprise her. “Even women who weren’t victims of sexual assault or misconduct in the workplace, most every woman has been a victim of the patriarchy and the environment where men are kings. Whether or not you were a victim of that egregious behaviour, as a woman, any story that came out about a woman not being allowed to have her voice heard or being told to be quiet, or sit down, or that your voice wasn’t welcome in the conversation, every single woman in the world can relate to that.” 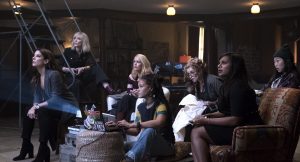 So the dark underbelly of her industry wasn’t a surprise. “As a person who has never encountered any of that sexual predatory behaviour from an environment in my work life, ever, that has never happened to me, so I think the surprise of this was how many women had had this happen and how many had been quiet for so long. How there was no safe space for anybody to express the horror and the sorrow of their experience.”

When you Google Sarah Paulson, you’ll hit 1.6million results of her and her girlfriend, actress and playwright Holland Taylor. The world learned of their relationship when Paulson closed her
acceptance speech at the 2016 Emmy Awards with,“Holland Taylor, I love you,” prompting many versions of the online article, Sarah Paulson and Holland Taylor’s “I Love You” Emmys Exchange Is #Goals. How does she feel about the public interest in her relationship? She laughs, “I understand people’s curiosity! You know, I just sort of march to the tune of my own drummer – or the beat of
my own drummer? I don’t even know what that expression is. I’m just a human being, on the planet, living my life. I try not to concern myself too much with how people are saying I’m living it. I’m just trying to enjoy and live my life and not worry too much about the rest of it. To me, there’s nothing curious about it.” 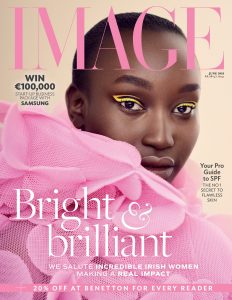 This article originally appeared in the June issue of IMAGE, on shelves now.

No, A$AP Rocky didn’t cheat on Rihanna — but rumours sure do travel fast