Mothers; we’re streaked with self-manufactured guilt as often as we’re streaked with the bodily fluids of our kids. From the moment we give life to that precious new being, it’s: ?Well, fair play to you for not trusting in the power of your body built for birth; hope you enjoy your anxious baby?. Shame, too; everything from the mould on the bathroom wall (which absolutely could have been tackled between night feeds), to your toddler’s telly-shaped eyes (screeching baby; more anon), is reason to board up the windows. Because it’s hard to believe that anyone is coping with new motherhood in quite such an amateurish manner as you are; especially if, (like me, after my first was born), there aren’t sisters or close by friends in the same boat, so you can’t actually witness the once crisp Acne blouses being soaked in leaking breast milk. ?They’re exaggerating to make me feel better?, is what you think.

When the truth is that, in one way or another, we all have child’s poo on our carpets? and, yes, it does stink. So, I will treat you to some of my own parenting shames, mainly in the hopes that my belief that every mother has taken a midday swig from a bottle of Bailey’s, is in fact founded; but also to let you know: you’re not alone.

First up, the lesser-known adage; there’s nothing quite like a mother’s rage.

I reckon the concept of unconditional love has a lot to answer for; or rather, our misinterpretation of it, mixing up liking and loving? which is a logical mistake. Think about anyone you’ve fallen in love with, as an adult; it always begins with attraction – liking everything about that person so much that it builds into love. But when you fall in love with your baby; not so. Before they’re born, you love your child more deeply than you’ve loved anyone. Then they arrive and the love doubles, but – beyond being cute in an old-mannish sort of way – they don’t give you a whole lot to work with on the liking front. 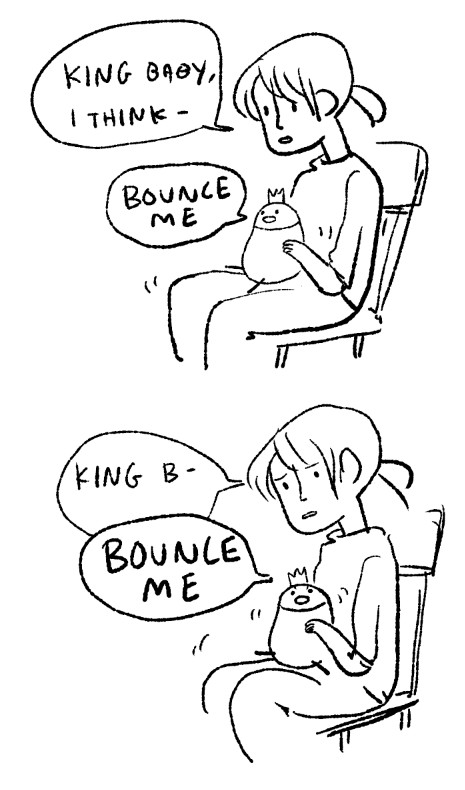 Even as the old man grows into a chubby, giggling, Disney-eyed, toddler and the love triples and quadruples, the juxtaposition of their vibrant autonomy and utter dependency leads to frustrating working conditions in what you were led to believe would be a dream job. A good 70% of your waking hours are spent caring for the basic and fantastical needs of The Miracle Babe, and – forget the fact that there isn’t a whiff of a thank you, for the first two years – most of the time, you’re fighting physical battle after psychological showdown just so that The Great Infant might allow you the honour of changing four heinous nappies a day and making avocados into little Mr Potato Head-like men (only higher in omegas).

Thankfully, being an adult and due to the aforementioned oceans of love, most of us are equipped to adapt to this new way of life, even becoming much happier than when we took freedom for granted. But there are days – clenches fists – oh yes, there are days. Picture the scene: It’s 3pm. I’m only half alive, having been up much of the night with a baby suffering from teething/ a sleep regression/ some other unexplainable reason to wail. I’m standing outside his room, after 90 minutes in there, helplessly trying to get him to take his nap. Broken. The four-year-old has been watching Paw Patrol, zombified, the entire time (I know, I know) and just as the house falls silent, the bigger one starts shrieking. Netflix can’t quite believe there’s still a child watching after an hour and a half, so has ceased broadcasting. I race downstairs and maniacally ?SSSSHHHHH?, to which his poor neglected brain responds with extreme distress; he’s on the floor, bellowing, throwing toys, loudly tipping over a kitchen chair. ?I don’t love you anymore?, he wails, and with gritted teeth, I respond, ?well I don’t love you either.? With that, I momentarily shatter one of my two most precious creatures? worlds. 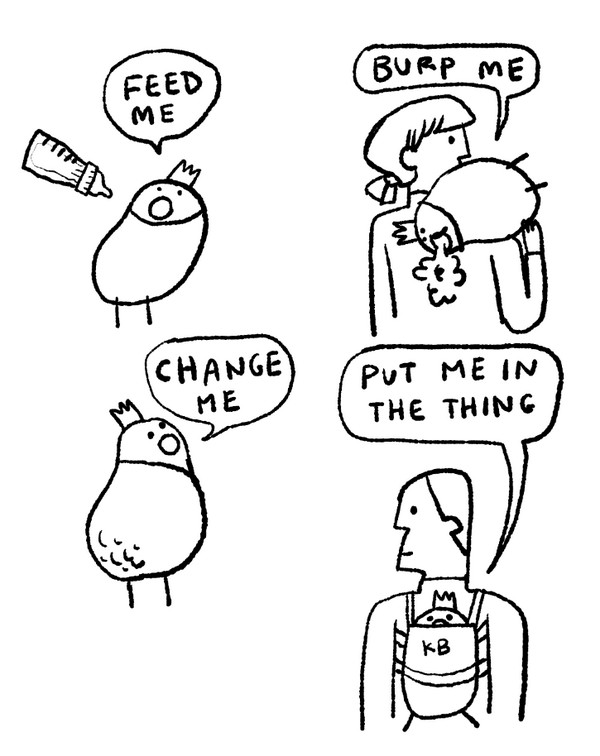 Now, what I should have done was hugged the poor, sweet child, after racing down the stairs; told him I was back to play, and fed his dipping blood sugar with a nutritious snack. My logical mind knows that his behaviour wasn’t bad, nor did it require anything other than a compassionate response, but anger serves a biological purpose; it compels you to battle an impending danger. And at that moment, to my baser self, there was a very real danger that The Cranky Tot was about to be woken up.

What I did do was apologise, as soon as I saw his beautiful eyes fill with sad, not angry, tears. And I like to think this is the most important thing; showing your child that if you mess up, you say you’re sorry, and you try to make things better. If your child is old enough to understand, there’s no better lesson for them to learn: even you, the Oracle Grown Up, who spends her day issuing Dos and Donts, and has the answer to every question? even you don’t do everything right. In fact, ahem, I like to think that losing your shit with your child, every now and then, is just fab for bonding, showing them that they’re not the only one who has trouble controlling their emotions. 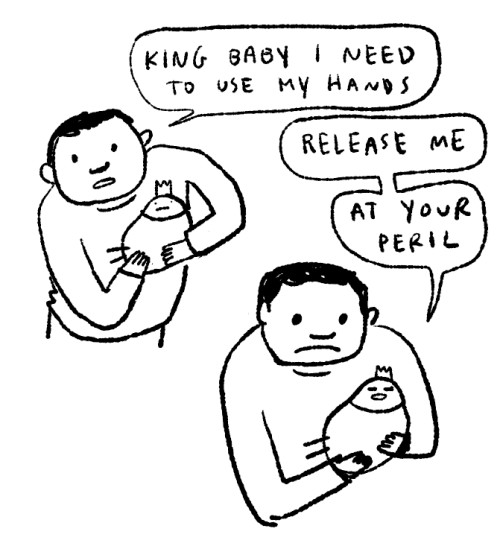 Even if the child is too young to follow your eloquent repentance, give it anyway. They’ll feel the hug, and you’ll feel a little less cruddy. And if all else fails; make chocolate. These little date balls have remedied even the crankiest afternoon, ?round our gaff – they’re super quick, stickily delicious, will fool the pickiest eater into thinking they’ve hit the jackpot? and you won’t feel an ounce of guilt if they scoff the whole batch in one greedy mouthful. 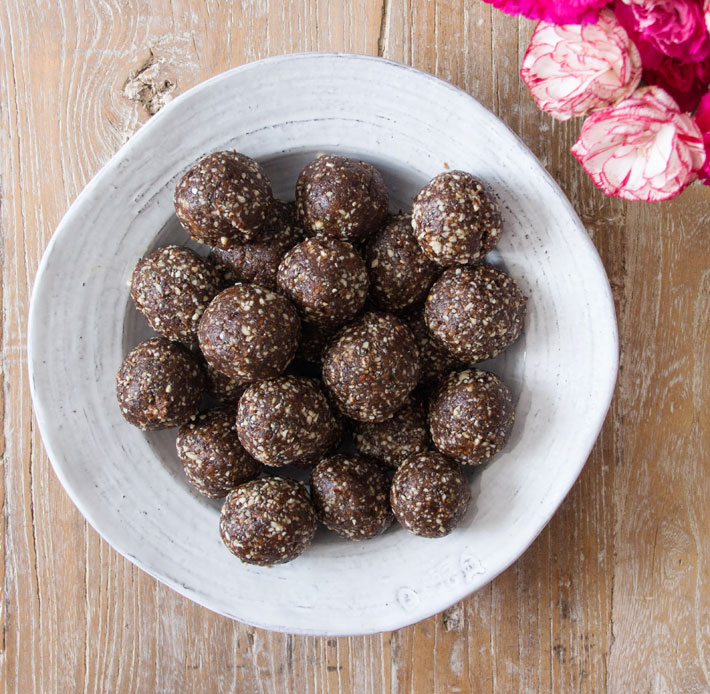 ? in the food processor. Allow the small person to press the button and shout loudly as the blades pulverize the contents into a lump-free, sticky paste (if it seems dry, add some more coconut oil or peanut butter). Once done, safely scoop the paste onto a clean surface. Next, watch a pair of chubby hands roll uneven balls from the mixture and feel stupidly proud as they patiently wait the five minutes these bad boys need in the freezer, to firm up.

Enjoy with tea and cuddles, while reading Kate Beaton’s hilarious storybook King Baby (images featured above); because there’s nothing quite as therapeutic as having a good old laugh at ourselves. 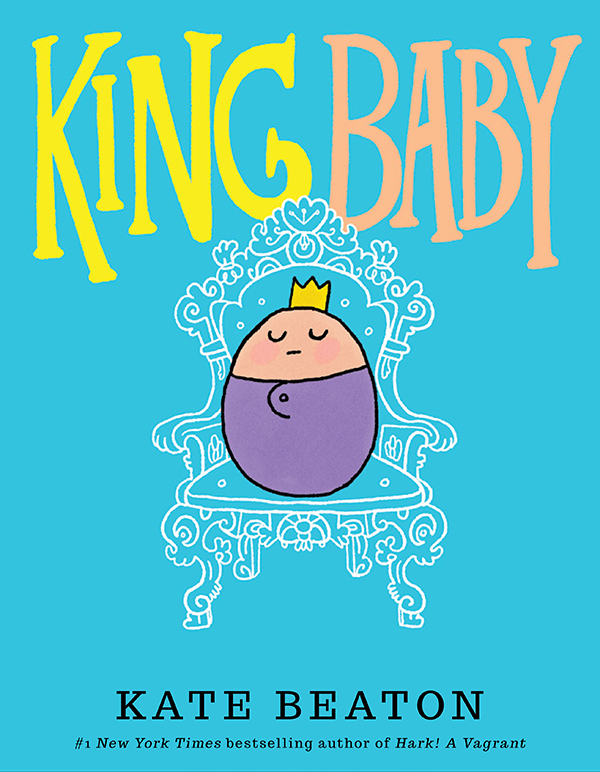