Hatch & Sons, beneath the fabulous Little Museum of Dublin, is one of our favourite city snugs, so when they offered us the chance to have a glimpse at their new menu we got very loud and hungry tummies.?What’s new? Pulled spiced brisket blaa served with tomato, rapeseed mayo and Cultured Food Company kimchi?for a mere €7.50, a superfood salad with hero sprouts and hedgerow dressing, and the return of Hatch & Son’s picnic packages. Ideal considering St. Stephen’s green is a hop away. The picnics include a blaa of your choice, bottle of Llewellyn’s Irish apple juice, DP Connolly crisps and a freshly baked square cake (lemon-raspberry coconut slice or brownie) for the discounted price of €12. Sounds far, far better than the squashed jam sandwiches we were subjected to during our childhood. 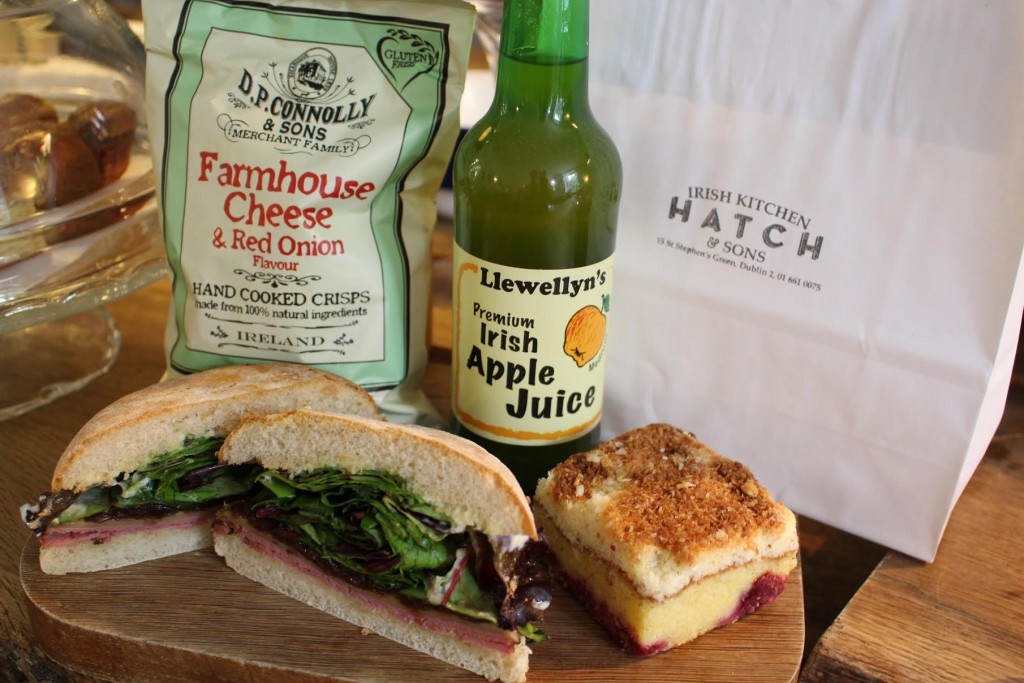 To celebrate the arrival of their new menu?Hatch & Sons’ Domini Kemp?has?given us the recipe to this delicious rhubarb, honey & saffron tart.

You will need a 24 cm loose bottomed tart ring and an oven to preheated to 190 C.

Mix the ingredients together in a food processor until it forms a ball. Then wrap in cling film and chill for an hour if you can.??If not, stuff it into the freezer for ten minutes.

Then remove top layer of cling film. Put the tart case onto of pastry (upside down) and invert pastry onto tart case.??Press down gently, along the sides and base so that it fits in snugly.??The cling film makes this easier to do as it acts as a good barrier.??Then you can put the dried beans on directly to the cling film layer and bake.

The cling film won’t melt, but if you get spooked and don’t believe me, then carefully peel off the cling film, top with a piece of scrunched up parchment paper, top with beans and place on baking tray and bake for 20 minutes. Then carefully remove from the oven, remove the beans and put back on the oven for another 5 minutes to dry out.??You should have a lovely golden and crisp tart shell case.

To make the filling: chop the rhubarb into 1 cm chunks. Toss with the Demerara sugar.??Whisk the egg yolks with the cream, honey, vanilla and saffron.??Then carefully pour into the cool tart shell.??Place the sugared rhubarb pieces in the tart with pretty colour facing up.

Then bake at 180 C for about 35 minutes. It should be nice light golden colour in parts.??Slightly soft, not 100 % firm.??Cool and top with toasted almonds if you like.??Slice and serve.??I like this best at room temperature.