Praise Be, Beyonc?! But Please Get Your BeyBeys Away From Me

Can you believe it’s been a month since Sir and Rumi Carter aka the BeyBeys were born unto us by the high priestess of fruit-bearing, Queen Beyonc? the first?

To say their first photo op was met by near-hysteria is something of an understatement, the Insta-announcement has been liked nearly 4.5 million times since it was published six hours ago (at the time of writing). That is some serious baby announcement goals, right there.

In fact, it being Beyonc?, the whole damn picture is goals. It’s goddamn goals on steroids. The image is own of halcyon beauty. It is an ecstatic composition of flowers and sky and ocean, a confluence of heaven and earth with Bey and her progeny cast as the union of these heavenly forces. The woman has?four-week old twins. I am exhausted?just looking at that sentence. I know, I know, it’s all “empowering”.

Side rant: I have been attaching the word empowering to lots of things that I do and it feels great. Try it. No one can challenge you on anything. Example: My Friday night bottle of wine is empowering, taking my husband’s name was empowering, growing my leg hair? Empowering. You name it, if it pleases me then it is damn well empowering.

But where does empowerment end and annoying publicity grabbing begin? 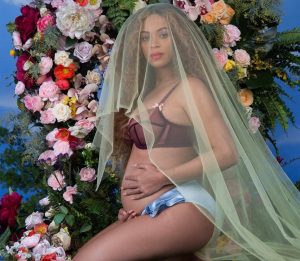 I know the arguments?for both sides. She’s taking ownership of the situation (is ‘ownership’ the new empowering BTW?) She’s curating and controlling the way that we can consume her children. And we are consuming them. She is celebrating her profound?joy in her new babies and that is lovely.

However, knowing this on an academic level does not change my knee jerk reaction which was a profound irritation. And it’s not confined to Beyonc? and her personal identity as a mother – I love the images she creates, it is true artistry – it is mainly directed at the pesky, irksome performance of motherhood that has evolved as a whole. Performing leads to competition, which leads to pressure and pressure is a big part of what new mothers struggle with. While Bey is obviously not seeking to present?a remotely realistic portrayal of motherhood – her stylised?images are utterly divorced from reality – this doesn’t stop the influence from filtering down and seeping into the culture on a subconscious level.

Social media has led to a feverish fetishisation of motherhood and I?think this is harmful to new mothers. The disconnect between what we see of new parenthood and the often difficult, draining and emotional reality of having your first (or even subsequent babies) is not helping new mothers adjust to the often lonely, harsh landscape of new motherhood. Or perhaps I just found the transition more difficult than most? Maybe I just feel a little trolled by all the perfection we see on our Insta feeds and am lashing out at Beyonc? because of my own feelings of inadequacy?

Either way, I’m sure Bey will manage without my liking her Instagram post. Oh, and welcome to the world Sir and Rumi.