II&L Editor Nathalie Gets a Golden Ticket to Foodie Wonderland

Edible cigars, melt-in-your-mouth rocks and lessons on the future of food – that’s just one day in the life of?culinary mastermind Ferran Adri? at his new restaurant Tickets and zany foodie factory elBulliLab in Barcelona.

?You should never, never doubt something that no one is sure of.? So said Willy Wonka in the Roald Dahl classic, but, after spending a few hours in his company, I learn that it’s exactly the kind of topsy-turvy thing food legend Ferran Adri? might come up with.

I have flown to Barcelona with a group of journalists from across Europe to hear the food icon – deemed one of the greatest living chefs – talk about his partnership with popular Spanish beer brand Estrella Damm. They have collaborated to create Inedit, a beer specifically designed to complement modern food.

But before that, we are being quizzed on food itself, on the essence of what it is to be a tomato – and nothing is as it seems. ?A tomato, is it a natural thing?? Adri? looks out into the crowd assembled at CaixaForum Barcelona, holding up a ripe, red and plump specimen, black eyebrows raised. We shuffle, squirm and murmur like school kids surprised by a test. Yes, comes the answer. ?No! It’s the least natural thing in the world!? he exclaims amiably. ?A natural tomato does exist in the Andes mountains, but it’s inedible; it’s disgusting. It has been domesticated by man. Your preconceptions about what is natural are false.? We are living in ?an imagined reality?, he tells us. The man who revolutionised modern cuisine with the beloved, Michelin-starred elBulli is looking to reinvent much more than just food. Adri? wants to change the world. 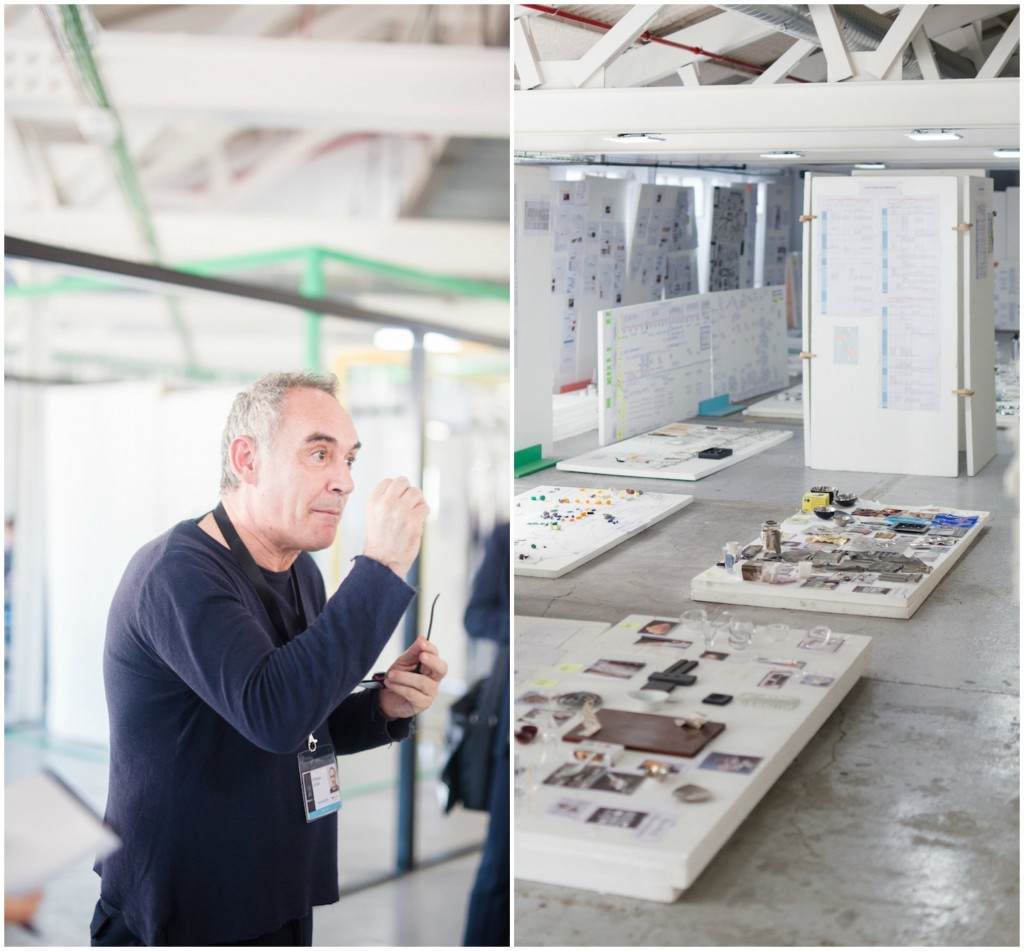 And he’s planning on doing it with elBulliLab, a collective of over 70 artists, architects, archaeologists, historians and philosophers, all working under him full-time exploring – well, it’s hard to tell exactly what. Ask Adri? and he’ll inform you they’re ‘decoding the process of learning and knowledge?. The only way to truly understand is to see it for ourselves.

So, after his talk, we line up – giddy as toddlers on a trip to the zoo – and make our way to elBulliLab, which is set in a converted industrial space. We expected chaos, creativity, and just a little hint of madness. But the room is calm and quiet; the mood industrious. Giant polystyrene boards create rudimentary room dividers and corridors. Pinned methodically to each of these are maps, charts, photos, website screenshots: all to do with food, in one way or another. Tiny little strips of paper bearing the names of every herb imaginable are individually pinned to one wall. On the ground, cooking and serving implements, mementos from elBulli, are carefully laid out and labelled, like finds from an archaeological dig.

The motto of elBulliLab is ?eating knowledge for feeding creativity?. Adri? is a man fascinated by the process of creating; who doesn’t see it as a precocious, precious thing, but something that can come from learning, growing, examining. All the exploration in this room will culminate with BulliPedia, a massive compendium of culinary knowledge that will come in book, app and website form, and will, Adri? hopes, be a resource for chefs, cooks, culinary students – anyone who loves food and wants to learn.

His curiosity and openness have always been a surprising part of his MO, and it’s part of the reason why some of the world’s most creative and in-demand chefs cut their teeth in his kitchen. 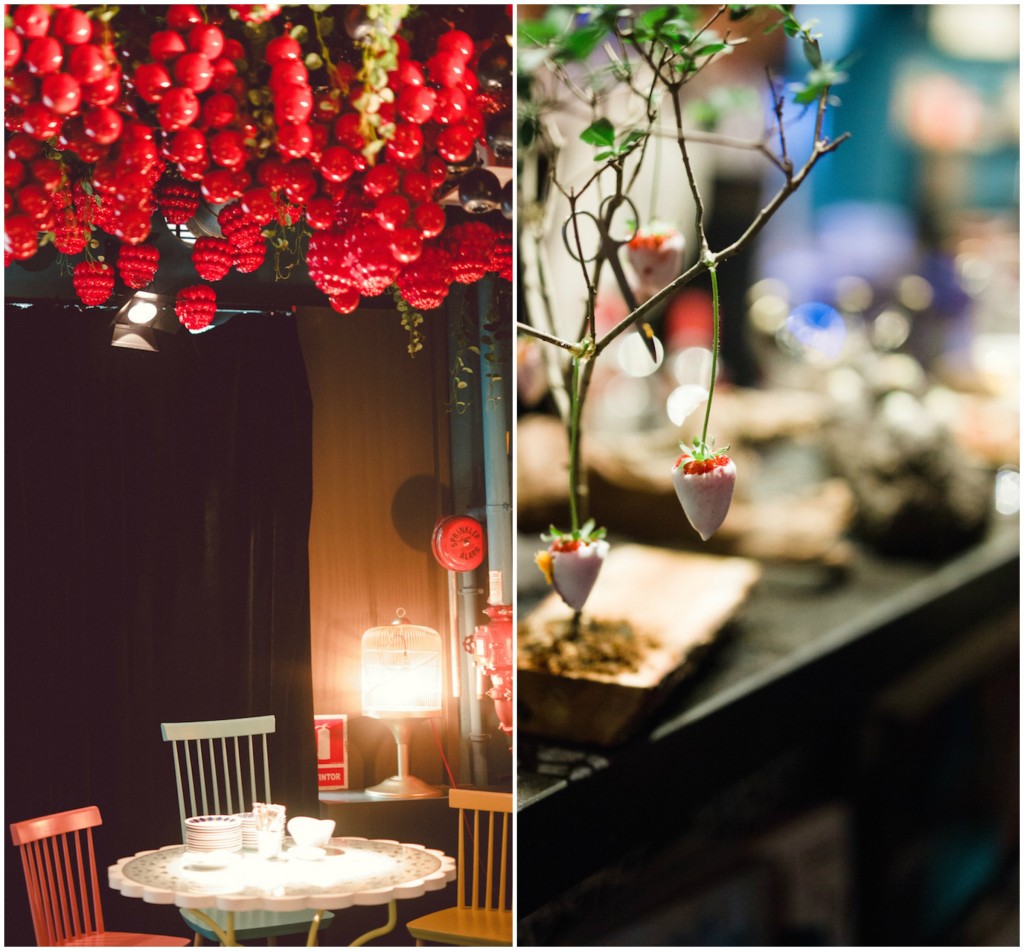 After the tour, we are taken to a tasting evening at Tickets, the contemporary tapas bar he opened in downtown Barcelona with his brother Albert in 2010 (shortly before closing the doors on the delectable but vastly unprofitable three-Michelin-star elBulli, in the Catalan town?of Roses). Tickets boasts a two-month waiting list, so you can only imagine our excitement. The d?cor is fun and theatrical, with a decidedly fairground, circus feel. The food – insanely tasty morsels of incredibly inventive tapas – arrives in trays and is devoured in seconds. Each dish comes with its own custom cutlery or instructions (?eat this all in one go?). It’s such a quick, exciting, ephemeral experience that even I – a self-confessed Instagram addict – barely take my phone out. I simply want to get my hands on the next delicious bite before it disappears.

There’s an eel hotdog with chipotle mayonnaise. A tiny flavoursome bite of potato, avocado, mint and cucumber. A wafer-thin savoury profiterole, filled with manchego and spherified hazelnut oil.
A mini burger of pancetta and edam on a brioche bun. The most incredible dumplings I’ve ever tasted. Half the fun is trying to figure out what each thing is.

It’s all washed down with glass after glass of Estrella Damm Inedit, which is brewed in Barcelona. A malt and wheat beer brewed with hints of coriander, liquorice and orange peel, its subtle, aromatic flavour and light, creamy texture make it a great match for the food, and it clears the palette nicely after each of the tapas – though not nearly as well as the caipirinha and mango sorbet we are served, which is made, theatrically, using liquid nitrogen. 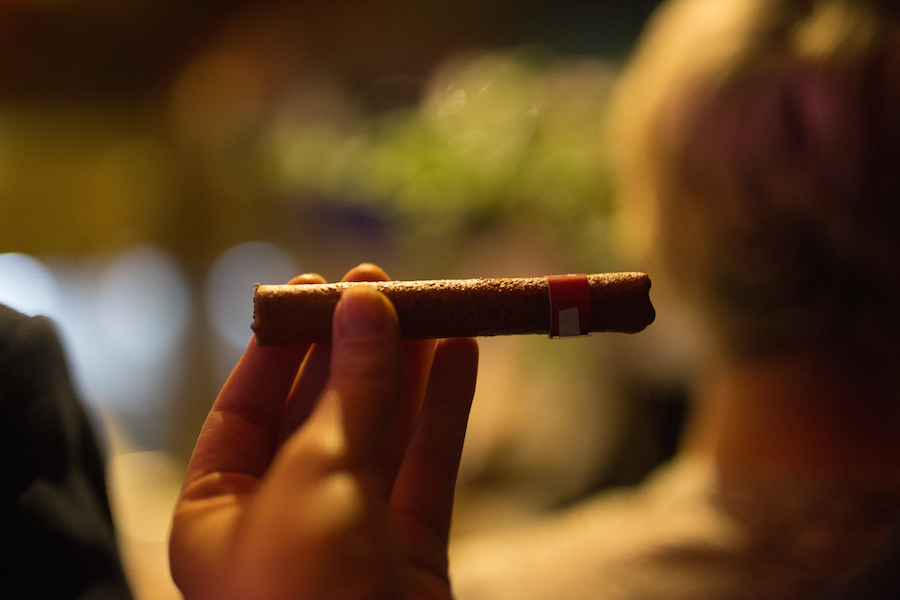 Come dessert, we are all given the Willy Wonka experience that we had been expecting. Like Charlie Bucket, we too are dazzled by the spectacle before us – ushered into a dark, low-lit room, where giant plastic berries and flowers hang from the ceiling. The bar is heavy with a mouth-watering array of desserts, and nothing is as it seems. ?Cigars? are actually thin-rolled biscuits stuffed with a delicious smoky cream. Strawberries dipped in orange foam ?hang? from real tiny trees – you have to cut them loose with a scissors before tucking in. Grey, lunar rocks turn out to be white chocolate and black sesame that melt in your mouth and seem to evaporate almost instantly.

With his intense focus on learning and study, you’d be forgiven for thinking that Adri? had forgotten how to have fun. A trip to Tickets proves otherwise.

Click through the gallery above in fullscreen mode to see more of Nathalie’s magical foodie whirlwind tour.