From Heartbreak To Breaking Bad Habits: Professional Organiser Sarah Reynolds On How To Finally Get It Together In 2018

For many people in their early 30s working to consolidate their careers, the idea of taking a year’s leave of absence to travel America might seem like a risky move. Dubliner Sarah Reynolds had a great job in television when she made the leap into a year of unknowns. With no plans and nothing organised (ironic as she is now a professional organiser who has just launch her first book called Organised) she found herself in New York and undertaking a course by the famous productivity and organisation expert, Julie Morgenstern. While apparently random, Reynolds had in fact been thinking about this organisation training course for some time.

“I was delighted to finally get there because I’d been thinking about Julie’s course for 15 years ever since seeing her on Oprah! It was a great foundation for approaching clients and what questions to ask and how to remove all judgments. It was a practical and emotional approach. She spoke a lot about how you must remove yourself from the process.”

After the sabbatical Reynolds returned to her job in television but she set up her website, and began looking for clients although it would be a couple of months before the first assignment came along.

“For three years I did both jobs, during that time I was promoted which was great but I decided that I’d really just love to give my professional organising work a go full time. I took another leave of absence and at the end of that year I decided to go. It was difficult trying to make that decision, do I really want to leave this permanent job? Is there enough work? All of that going back and forth.”

Luckily Reynolds was able to do some freelance work while she established her business.

“It’s a very new service to Ireland, so often people haven’t a clue what it is and then when you do get started they have to get over the time that it takes – we all want things done yesterday! I’m so grateful to the clients I’ve worked with because they’re standing there with their possessions laid out in front of them and a stranger beside them telling them what to do with them.”

“I’m not a psychologist but I’ve learnt so much over the years. Every single client is different. They may all call me for their wardrobe but the reasons why are all so different. Some of them have gone through a terribly hard time and I’m delighted if I can give them a bit of breathing space. Organisation can give you that. It can make you feel a bit more in control of things.” 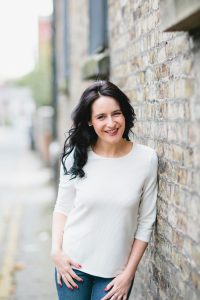 “It’s overwhelming but at least now there’s two of you tackling it and one of you has a big plan and knows what it’s going to look like in a few hours. I also give people strategies for how to maintain the organisation in the long term. Often people find it extremely difficult to let go of things.”

The last couple of years have been a painful period of letting go for Reynolds. Her engagement broke up unexpectedly just over two years ago and Reynolds was completely blindsided by the split.

“We were engaged about a year when we broke up, we hadn’t set a date but I never in a million years thought it would end ever. I was absolutely devastated. I’ve literally only started to feel better in the last couple for months. I can’t remember the initial breakup. I couldn’t tell you what happened. I think I just went into ‘Oh my god, I need to work’. Head down, get going, look after yourself, though I don’t think I was looking after myself.”

“I remember sitting on the couch after the break up and my mum telling me ‘you’ll learn from this’ and I just couldn’t believe her but I actually have. I’ve learned so much that even though it was so painful, I wouldn’t change anything.”

“It now helps me understand when I’m working with other people because it is so hard. He didn’t die but he might as well have, I’ve never seen him again. So I had to do the thing of going through the stuff. It was really, really upsetting but I think that it’s a timing thing. You live with the stuff until you feel comfortable letting it go. And ‘comfortable’ is the wrong word because it’s still really, really hard. I just said: ‘This has to be done’.”

Sarah’s Top Tips For Getting It Together In 2018

Your evenings are very important, it sets you up for the next day. Make a habit in the evening to prepare for what you may have on the next day.

The key with organising is to always look at your energy levels and see when you work best. When I was writing my book Organised, I used to drive out to the hotel in Portmarnock, go for a walk on the beach and then write all morning.

Understand your schedule and take on board exactly how long different tasks take you, this means you know when you can add something to your day or if you need to drop something. Engage with how long it takes to get ready for example and allow for that. I find that if people are running ahead of themselves, they tend to add one extra thing that will then invariably tip them over into being late.

When writing to-do lists, put a time slot beside each item. I call them ‘when-do lists’, and identify the top-three things that need to get done in a given day and don’t put them off. That way even if you don’t make it through the to-do list, the most important things got done.

In terms of organisation of a room or wardrobe, I recommend doing de-clutter sessions as closely together as possible, rather than chipping away over long periods of time. This way you can get ahead of the de-clutter and then you get to the organisation side of things. 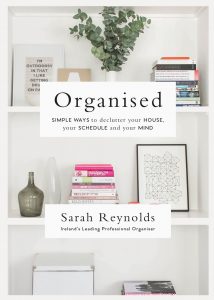 Organised: Simple Ways To De-Clutter Your House, Your Schedule and Your Mind by Sarah Reynolds is available to buy here now.