The rapper has revealed the interior of his Toronto home, and it’s a lot to take in

Celebrity mansions always look a little strange to those of us that live in homes without swimming pools. White rugs that shout “I pay other people to clean my home”, and fridges full of Fiji water and prepacked salads, with no sign of a pint of milk seem odd to us mere mortals, but usually, we shrug and move on.

However, since Drake revealed the inside of his Toronto mansion to Architectural Digest, designed by Canadian architectural and interior designer Ferris Rafauli, the photos have haunted my brain ever since. The 50,000 (!) square foot building resembles not so much any kind of home as the set of a film depicting a slightly dystopian future.

For reasons I cannot fathom, and I really have tried (Is he implying he is as important as a country? Has he always wanted to be an ambassador?), Drake refers to his home as ‘The Embassy’. “Because I was building it in my hometown, I wanted the structure to stand firm for 100 years. I wanted it to have a monumental scale and feel,” Drake says. “It will be one of the things I leave behind, so it had to be timeless and strong.” Unlucky, Toronto.

The other star of Drake's Toosie Slide: his incredible mansion in Toronto.https://t.co/rPJwLqpknR

First of all, the enormous yellow lounge is perhaps one of the most confusing rooms. I would usually be disdainful of anyone who calls a lounge what is in fact a living/sitting room, but in fairness to Drake, this room is not conducive to either normal living, or even sitting, for that matter. I barely know where to begin, but let’s start with the sofas, which we’re informed are made from materials including “dyed ostrich skin and mohair”.

Not only do none of them look remotely comfortable, what on earth are the two grey ones for? The yellow ones at least could facilitate a conversation, but the grey ones look out only to the expanse of cold marble floor. The number of mirrored surfaces is giving me a headache, his chandelier looks like a coronavirus structure, and why is everything, including the oscillating ceiling, backlit? The ceiling also looks like it might open up to abduct people in this film that Drake lives in, and I won’t even go into the fact that it’s made of suede. 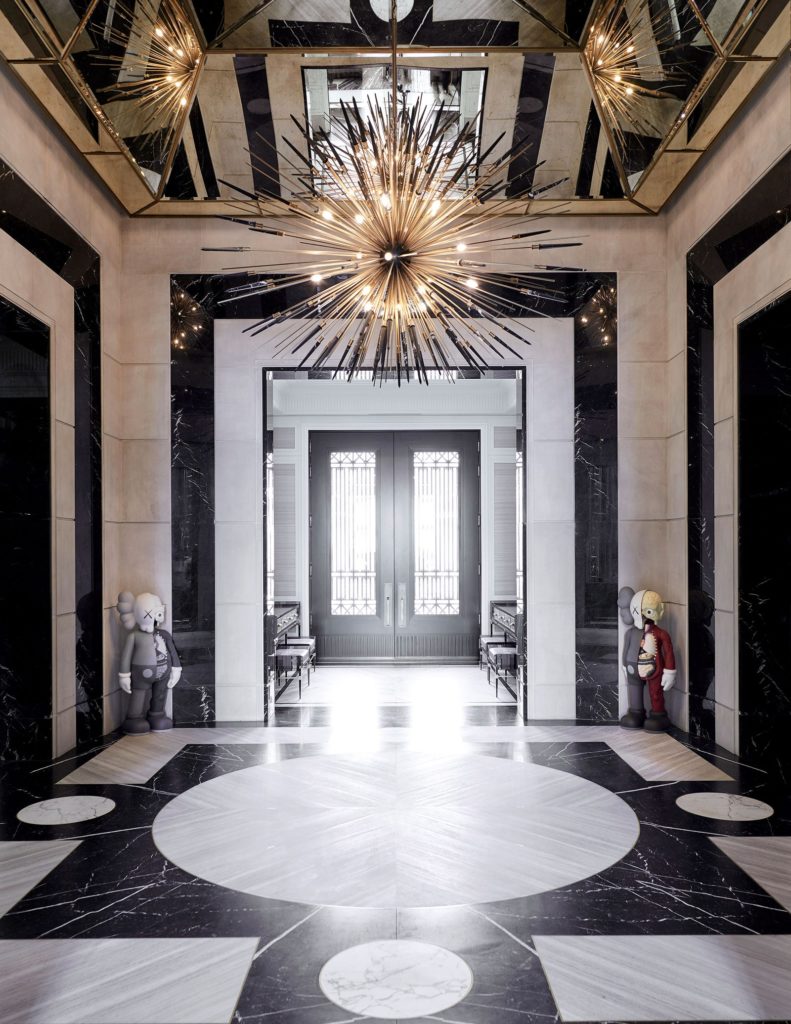 Drake’s entrance hall genuinely looks like the entrance to a high-end haunted house attraction. The mirrored ceiling helpfully makes the room seem to trap you forever in its black-and-white walls, and that chandelier is just waiting to impale someone. The two Kaws sculptures are suitably unnerving, and seem to serve as a warning not to go any further, lest you suffer the consequences. 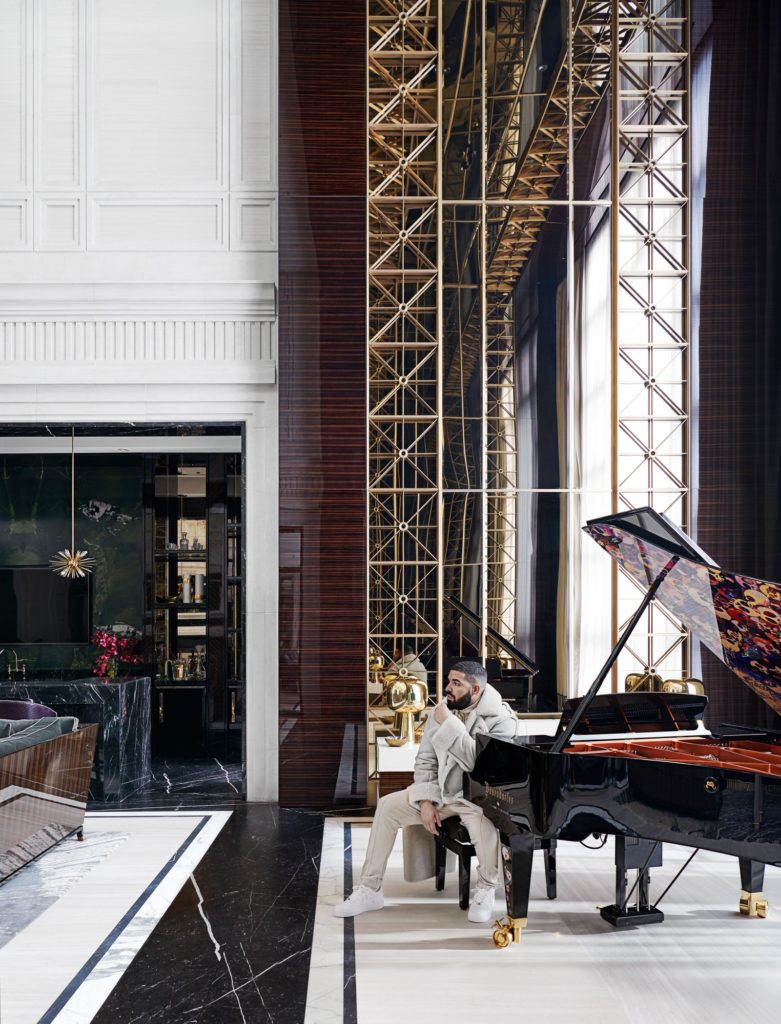 Let’s take a breather for a moment with one of Drake’s slightly more normal rooms, with a ceiling that reaches 44 feet. This is where Drake keeps his bespoke Bösendorfer concert grand piano, designed in collaboration with Japanese artist Takashi Murakami and Rafauli, as well as his requisite many shiny surfaces. 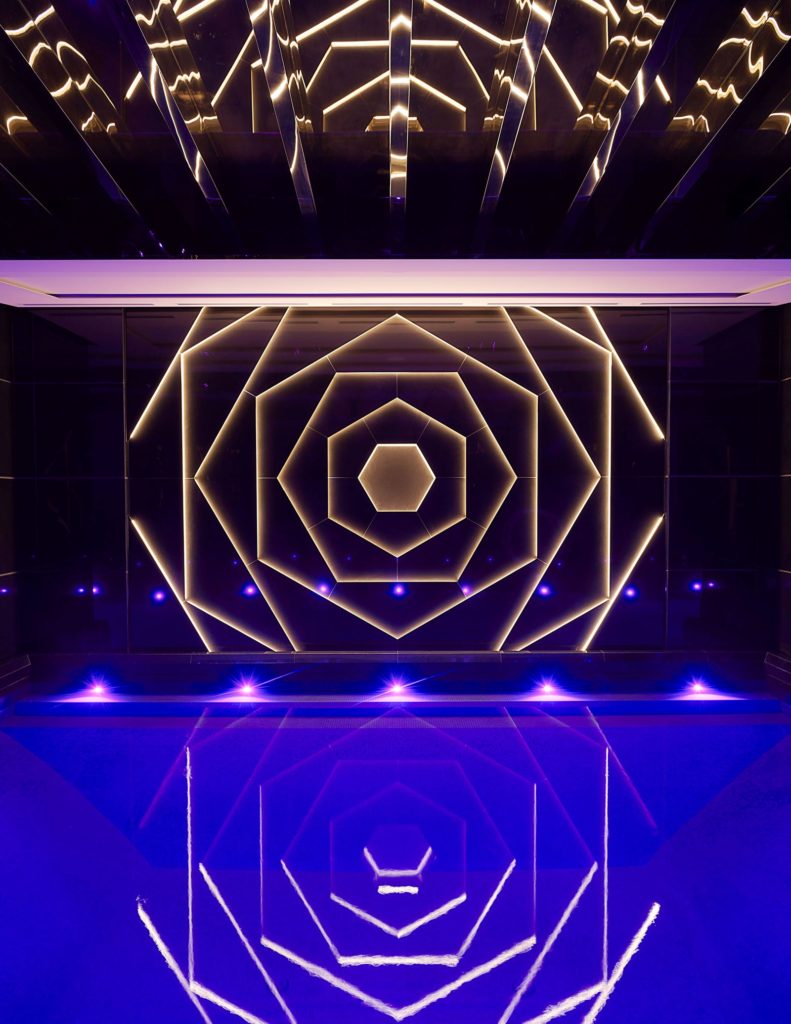 Back to the weirdness, this time to what is not a nightclub, but in fact Drake’s black granite indoor pool. We see the backlit oscillating hexagons make a return here, looking this time more like they’re intended to hypnotise unwitting swimmers, or perhaps signal membership to a secret organisation. Either way, it must be quite strange to swim in near darkness. 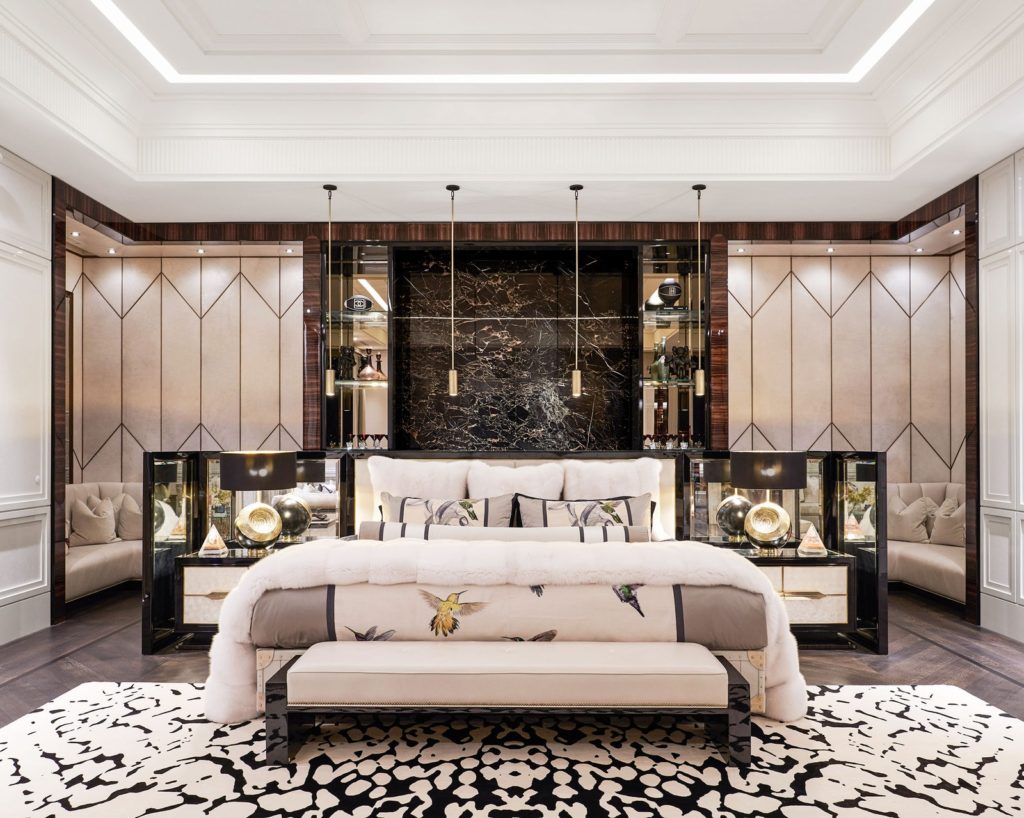 Moving on to Drake’s bedroom, which he informs us is his favourite room in the house. The bed weighs over a ton, and has a champagne and whiskey bar on the reverse side of the headboard. We aren’t told how much exactly it cost, only that this amount was more than the value of some people’s homes. The bedroom suite covers 3,200 square feet, with an additional 1,100 square feet of covered terraces.

“The bedroom is where I come to decompress from the world at the end of the night and where I open my eyes to seize the day,” Drake says. “The bed lets you float, the shower lets you escape and gather your thoughts, and the closet makes you want to talk to yourself while you’re getting dressed.” These are all perfectly normal reactions to one’s normal house. 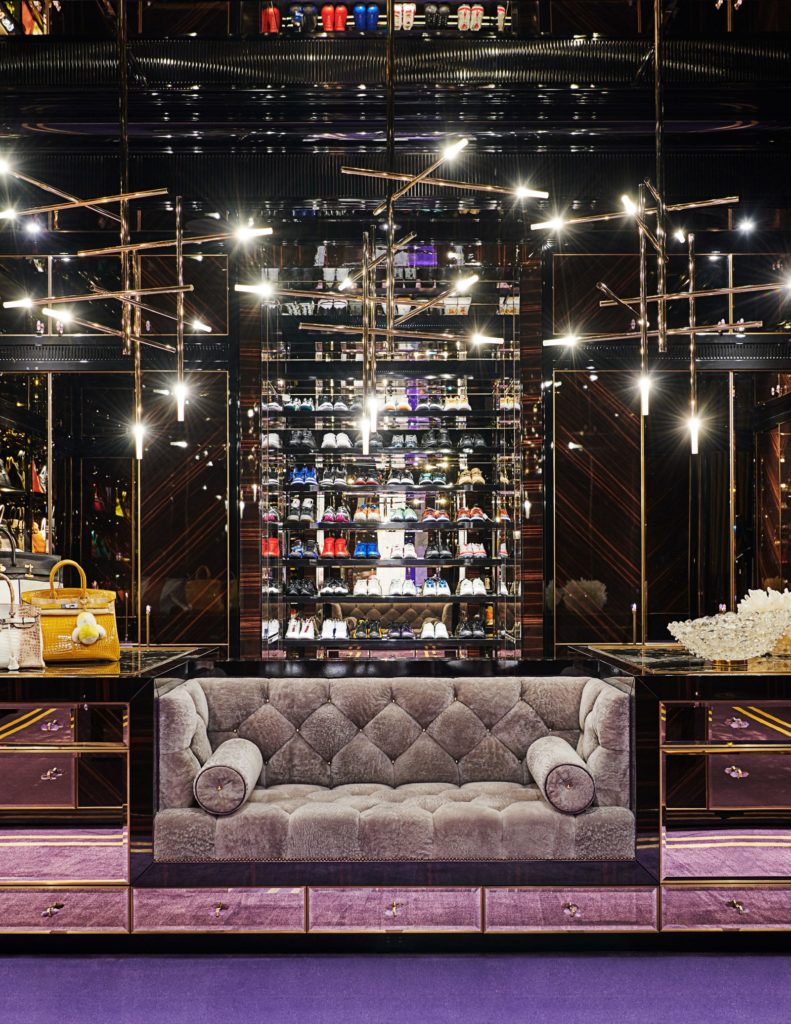 His walk-in wardrobe is not one, but two storeys, and features amethyst hardware, and seating upholstered in diamond-tufted shearling with polished nickel studs. This is also where he keeps his sneaker collection, as well as the collection of Birkin bags that he has been adding to for years for his future, and currently non-existent wife, who I guess will need to be really into Birkin bags to make the cut. 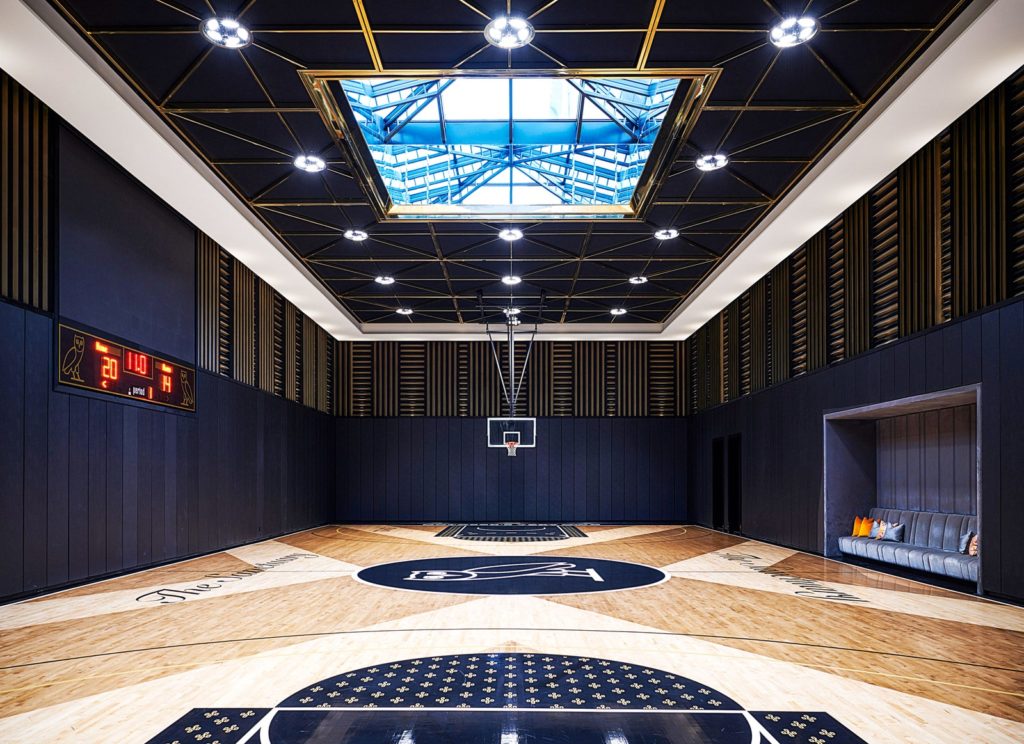 In case all that marble wasn’t enough extravagance for you, Drake also has a full-size basketball court, lit by a pyramid-shaped skylight, naturally. Of course, he also has an awards room, which tells the story from his childhood to his years on the Canadian television show Degrassi: The Next Generation, to his life as a Grammy-winning artist. 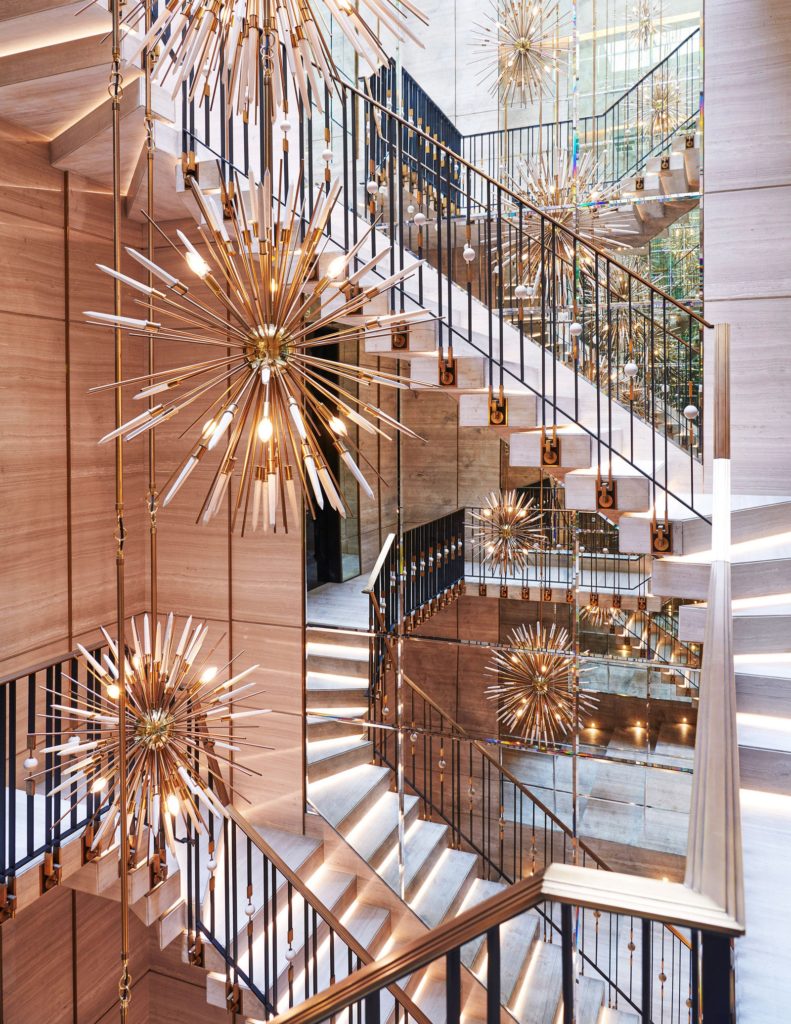 I will leave you with this mildly terrifying and profoundly confusing staircase. I can only imagine trying to go upstairs after a glass of wine too many, and becoming utterly overwhelmed by the task.

Read more: Wish you had better self-isolation surroundings? This Westmeath castle is on sale for €5 million