Wish you had better self-isolation surroundings? This Westmeath castle is on sale for €5 million

We’re all getting a little bored of our surroundings at this point, so it’s nice to imagine where we could be spending self-isolation if we had €5 million to spare

If you’re getting more than a little sick of your home, you’re not alone. People are pretending their balconies are a beach, turning their living rooms into theme parks for their kids, and trying to recreate spas in their bathroom, all to try and change things up a bit.

However, if we lived in an actual castle, we don’t think we’d ever get bored of just lounging around at home. This is (theoretically) possible, as Knockdrin Castle in Mullingar, Co Westmeath is for sale, asking for offers in excess of €5 million. 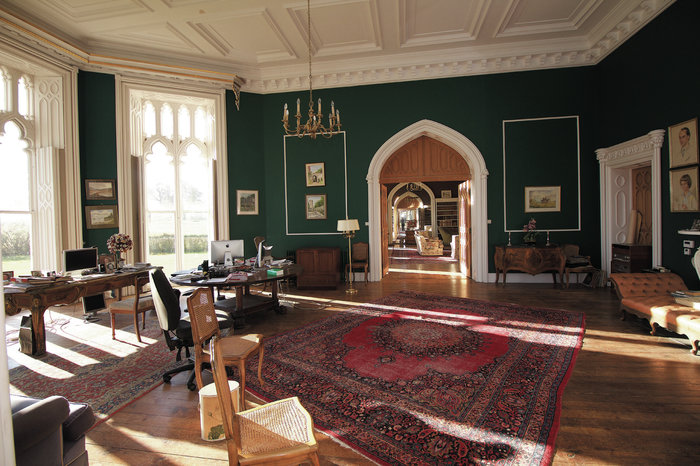 Built by Sir Richard Levinge in around 1810, this Gothic revival-style building is set amongst 500 acres of parkland. Within the gardens there is also the ruins of a medieval 16th century structure, thought to date to around 1550.

When entering the castle, you are struck by the staircase, which is naturally lit from above by a glass dome.  The staircase itself is made of carved oak, and the elaborate first floor gallery is decorated with ornate plaster work.

The ground floor features a drawing room, dining room, ballroom and library. There are also four lodges on the estate that provide additional accommodation. The castle extends to some 19,375 square feet and has seven main bedrooms, and 12 in total. This includes the Crown Bedroom where British Prime Minister Sir Winston Churchill stayed during the War of Independence.

The castle has impressive mature trees and gardens throughout the estate, including arable land, commercial woodland and Lough Drin, where the footprint of a lakeside tea house is still visible. The castle is positioned in a private spot with beautiful views across the landscape, yet it is only about five minutes drive to the M4, and just an hour from Dublin.

Knockdrin Castle is believed to be the first house in Ireland to have both central heating and electricity. It received major upgrades around 50 years ago and has been well maintained since then. All in all, a great place to spend quarantine, should you happen to have the funds.

Read more: This surprisingly spacious three-bedroom house in Portobello is for sale for €850,000