‘If the bees die, so do we’: The apocalyptic reality of bee extinction

Today is International #BiodiversityDay. Here we look at the worrying impact bee extinction could have on humankind…

Did you know that if every bee on earth was to die today, the human population would have just four years to live? A scary, apocalyptic-sounding scenario, but this is the reality we face if the world’s bee population continues to plummet at the rate currently taking place.

The revelation came in June 2018, when Sir David Attenborough revealed on social media that if we don’t do something to save our bees, the human race itself will be at risk.

“In the last five years, the bee population has dropped by a third,” he said. “If bees were to disappear from the face of the Earth, humans would have just four years left to live”.

If that statistic isn’t enough to bolster you into a bee-saving frenzy, consider this grave report from Irish scientists Dr Úna Fitzpatrick and Dr Tomás Murray. It holds that, should things continue as they are, “a third of all bee species in Ireland will be extinct by 2030″. Considering how bees pollinate the plants which grow our food, that’s a reduction of pollination by a third.

Related: 10 things we learned from our visit to the recycling centre

Anyone else feeling a little unnerved by this revelation?

Unfortunately, there’s no one to blame but ourselves in this scenario. A combination of modern urbanisation, the widespread use of pesticides and intensive agriculture has spurred these developments, and it’s only us who can turn it around.

Some ‘dead’ bees are just resting

Such is the importance of the bee population that David Attenborough outlined a step-by-step way in which we can all play our part (on a micro level) this summer.

“This time of year, bees can often look like they are dying or dead – but they are far from it.

“Bees can become tired and they simply don’t have enough energy to return to the hive – which can often result in being swept away”.

To give tired (sometimes dead-looking) bees the much-needed energy they need, the 93-year-old wildlife expert says, “Mix two tablespoons of white, granulated sugar with one tablespoon of water and place on a spoon for the bee to reach”. 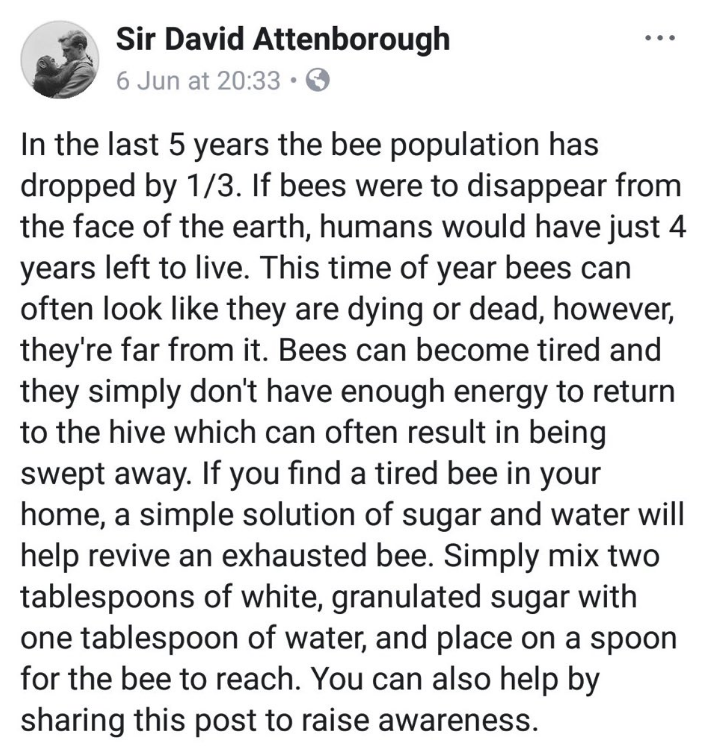 The advice was heeded by Irish celebrity chef and model, Roz Purcell, who showed a deflated bee on her Instagram account; which she successfully brought back to life by implementing the sugary-water-on-spoon strategy.

Do as the French do

In an effort to raise awareness of the current bee epidemic, the Louvre in Paris has welcomed the arrival of six beehives into its grounds. Placed within 400-metre squares of wild meadow, the six beehives will be there for the next three years, thanks to French skincare brand Nuxe funding the project.

The conservation project sends out a strong message that we all need to be proactive in our efforts if we want to save these incredible creatures. Here’s hoping that Irish brands might follow Nuxe’s lead in communities around the country.

What can we do to help?

Firstly, we can follow the advice of Sir David Attenborough (and the example of Roz Purcell) by offering a struggling bee some sugary water to revive it.

Additionally, a few simple changes to the way in which we tend to our gardens will reap serious long-term benefits.

By avoiding the use of pesticides and planting flowers that bees prefer (such as Comfrey, foxgloves, marjoram, buddleja, sunflowers and lavender), we’ll prevent further damage whilst supporting the reproduction of our local bee community.

For more information on how you can help save the bees, see The Irish Wildlife Trust or The County Dublin Beekeepers’ Association.

Read more: Go Green in 2019: Eight ways to break up with plastic