Aisling McDonagh’s impressive CV includes high-flying roles at Women’s Health, Refinery29, Yahoo, Hearst and Domino Magazine – but the decision to have her daughter Gemma using IVF was “one thousand per cent” the best thing she has ever done.

The Chicago-born media sales executive said that, at age 41, after the demise of a relationship, she knew she really wanted a child. After working her way up in a highly competitive industry and thriving in New York city for twenty years, becoming a single mother was another thing she took to with aplomb.

“I didn’t want to wait any longer; I had waited long enough. I got pregnant immediately on the first attempt. It’s not common. There’s only an 8% chance as I was 42 when I conceived her.”

McDonagh now serves as the Senior Director of Key Accounts at Getty Images, overseeing teams in New York and Chicago. Her role is no less hectic than any other she has entailed, but having Gemma has resulted in a shift in priorities. 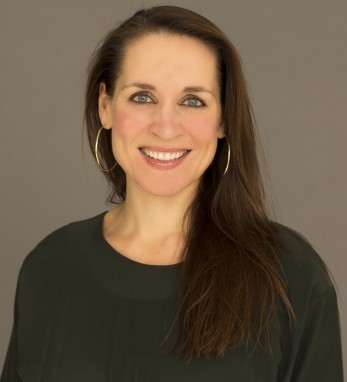 “My days are long because I have a child, but I’m not on email before 9 am,” she said. “You have to put those boundaries in place. With a toddler, you don’t have the bandwidth to do that. I’ve to feed my daughter, get ready myself too, out the door to school and to work. I’m not the type of person who’s getting up and reading emails at 6 am. I wasn’t that person before and now with a child, I’m definitely not that person!”

While any stressed-out Manhattanite might look to someone like McDonagh and wonder how she raises a child in a city that’s as unpredictable and frenetic as it is expensive, she maintains that the benefits far outweigh the drawbacks.

“At this age? It’s easy raising a kid! She’s so little. [Where we live] I don’t live in fear of her running out into the street, there’s a lot more space. We live right on the river walk so we often walk there. We’re happy with our corner of the world. So far, so good – having a teenager in Manhattan would be much more nerve-wracking!”

“She’s exposed to every language; she’s learning Mandarin at her daycare and she’s got children from eight different nationalities in her daycare; it’s a melting pot,” McDonagh continued. “We’re steps from historic lower Manhattan, we can take the ferry, go to Central Park, or see the dinosaurs at the American Museum of Natural History… plus, it’ll give her major street cred when she’s older that she can say she’s from the city!”

McDonagh herself was born to Dublin natives, and she laughs that they are surprised she and her siblings have stayed put in America. 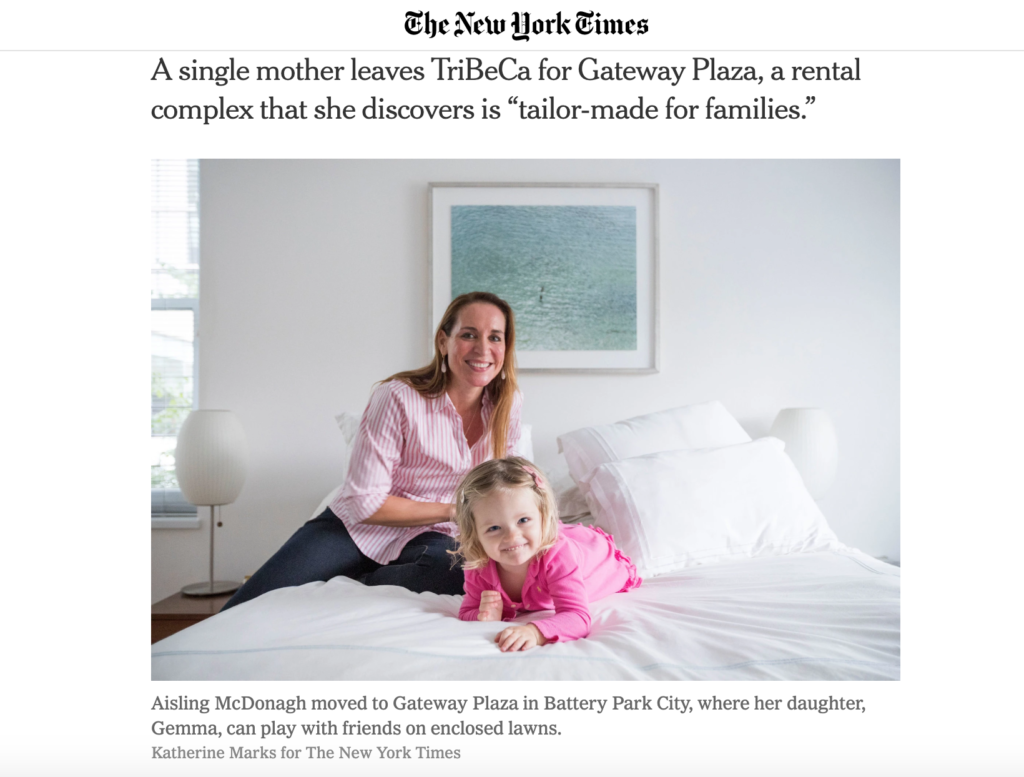 Aisling and Gemma McDonagh in The New York Times

“My dad’s a doctor; they came here for his four-year medical residency after he went to medical school in Ireland. There was more opportunity in America as the Irish economy wasn’t strong in the 1970s.”

“Over the course of those four years, they lived in four cities [including] Tucson, Arizona and Detroit, Michigan. For the fourth and final year, they moved to Chicago where I was born in August 1973. We moved back to Ireland three months after, then we left Ireland again when I was 3-years-old, but every June/July/August we went back to Ireland. I have 31 cousins there on my mother’s side!”

McDonagh has strong relationships with her siblings Ciara, Fiona and Gavin, who are dispersed all over the US, and her parents still live in Chicago. When McDonagh moved to New York two decades ago, it was her older sister Fiona who helped her get her start and figure out that pivotal first step on the career ladder.

“Fiona worked at Rolling Stone Magazine on the editorial side. I knew I didn’t want to do that, but my Type A personality led me to sales. Through friends, she got me a job working at Time Out New York and I’ve bounced around in publishing, mostly in digital, since then.”

In 2014, she was given the prestigious honour of being named in the Annual Irish America Business 100, which recognises the ‘best and the brightest’ Irish-born/Irish American leaders. It was through initiatives for the Irish/Irish American community in New York that she met a collective of other professional females, who together were inspired to create a networking opportunity for other Irish women.

“Nicola [Parish, of NYC-based Parish Public Relations], Aisling [Keogh, marketing executive and a board member at NYC’s Digital Irish] and I started EPIC six years ago in my apartment. We would meet at events and we were talking and we said, ‘There’s no thing just for the women, let’s put an outing together’. We couldn’t find a venue so I said, ‘Let’s just have everyone back to my place!'”

“We just started this little database. We couldn’t figure out a name for it.. ‘The Irish Collective’… ‘The Irish Women and Wine’! We said, we cant keep calling it this name, it needs something, so it became the Irish Women’s Networking Group, before Nicola’s team came up with the name EPIC.”

“It’s been pretty cool,” she continued. “It’s just women helping other women. Madeleine Albright said it brilliantly: There’s a special place in hell for women who don’t help other women! All these young Irish women come to the US and it’s like, ‘What are your visa needs, are you looking for a job, do you need an internship?’ We’re a network for them, as we all know a lot of people.”

Ironically, the topic of the last EPIC event was how to maximise the potential of your side hustle. It was a subject close to McDonagh’s heart, as she continues to nurture her hormone health coaching business, The Clear Way to Conceive. As she was planning to begin IVF, she enrolled in an online course to educate herself in an area that she was always passionate about.

“I did it before I got pregnant. I always wanted to do it and I had some time on my hands. I did the health course and then the round of IVF two months later. I also took a course in hormone health: how different foods and stresses and the environment can affect your hormones and what you can do about it. I put myself on a ‘fertility diet’ about four months before I tried to conceive Gemma, taking certain foods and adaptogenic herbs. I think that’s why I got pregnant so fast; that preparation. My doctors and nurses were gobsmacked I got pregnant straight away.”

“I have a website [for coaching] and I’d love to only do that and focus on it. I haven’t necessarily dedicated enough time to it, but as a solo parent I have to figure out what’s going to keep the lights on in an expensive city like New York.”

Still, McDonagh’s illuminating passion for New York City and doing things her own way seems like it’ll never go out.

If you are Irish woman based in New York, find out more about EPIC here.