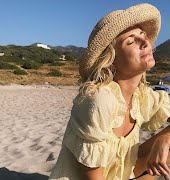 ‘After being in a worldwide lockdown, I really noticed how important spending time with your...

50 years on, the incredible story of how we touched the moon

It is 50 years since the astronauts of Apollo 11 made their historic voyage to the Sea of Tranquillity. Putting a man on the moon was proof that humankind could conquer the impossible – and marked a stepping stone towards deeper space. Amanda Cassidy looks back on the Apollo missions, the moon landing and what comes next…

Since ancient times, humans have gazed at the heavens and dreamt that someday we could travel deep into space, to explore the moon and the planets which have eternally captured the imagination.

Related: Five women in STEM you should know about

In October 1957, science fiction finally came to life when the Soviet Union launched the first-ever satellite, Sputnik. The public was astonished. But rivalry took over. Suddenly the space age became a few frontier in the Cold War. Who would win the space race?  It prompted US President Eisenhower to set up the first Outer Space pledged to “peaceful purposes and for the benefit of all mankind”.

It was an exercise in the expansion of human knowledge of space. And it was won by Russia. In April 1961, Yuri Gagarin became the first man to venture into space. He was launched out of our atmosphere in a small Sputnik named Vostok, meaning ‘east’.

The US was just eight months behind their Russian counterparts and were determined to take a leading role in space achievement. JFK vowed that before the decade was out, the US would take on the ambitious goal to land a man on the moon and return them safely back to earth.

The moon race was on.

“We would neglect our duties as human beings if we didn’t try to investigate further.”

NASA, the National Aeronautic and Space Administration was set up. A task force was set up to coordinate the Apollo missions. During interviews for the Apollo 1 mission, the astronauts were interviewed about how tough it would be away from their families. Roger Chaffee explained that the plan was bigger than they were. “It is a new phase of exploration and I’m honoured to be a part of it. You might say that we would neglect our duties as human beings if we didn’t try to investigate further.”

“Gus” Grissom was leaving behind two young sons but insisted it was a scientific necessity. “We can’t predict the things we will find. It might give us more insight into the birth of the universe and our solar system. Of course, you fear a catastrophic failure but you have to put it out of your mind, you just plan as best you can to take care of all eventualities.”

In 1967, a month before they were due to take off, Grissom was among three astronauts killed when a fire broke out on board the rocket during a stationary flight rehearsal.

The funerals of the three men were held together on a clear day, with the moon visible overhead –  the same moon they hoped someday to walk on.

“The moon is a different thing to each one of us.”

After a series of unmanned flights and with renewed momentum to touch the moon, Apollo 8 launched in 1968 – the first manned spacecraft to go beyond the gravitational pull of the earth into orbit around the moon. The aim of astronauts Frank Borman, James Lovell and Bill Anders was to finally see the dark side of the moon. This would be mankind’s first rendezvous with another celestial body and the public were emotionally invested.

The first pictures released from the mission were beyond anything we had ever seen before. The sheer beauty of our planet captured for the first time. Astronaut Jim Lovell put it best when he said “What I keep imagining is, if I’m a – some lonely traveller from another planet, what I would think about the earth at this altitude. Whether I think it’d be inhabited or not.”

Millions of viewers across the world tuned in for Apollo 8ths broadcast from lunar orbit on Christmas Eve. It was to be the largest television audience of the era.

“The moon is a different thing to each one of us,” said Borman, one of the astronauts to the watching crowds.  “I know my own impression is that it’s a vast lonely forbidding-type existence.” The Christmas day reports and imagery of the 40% of the moon we’ve never seen, sent back by the three-man crew of Apollo 8 even prompted the Flat Earth society to re-examine their findings.

The moon barrier had been crossed. We now had the capability to soar as high and as far as our dreams could project.

The next dream was putting a man on the surface of the moon. On the 16thof July 1969, millions turned up at Kennedy Space Center, Florida to watch Edward ‘Buzz’ Aldrin, Neil Armstrong and Michael Collins blast into space as part of the mission, Apollo 11.

There are cheers as the rocket emerges from the plumes of smoke, rising majestically into the sky, moon-bound. The grainy footage of the crowd captures the tension and exuberance of the time – hands up to faces, wet faces, children waving.

Neil Armstrong’s wife, Jan was among those watching. She was asked if she had plans for when her husband returns. “We haven’t made any plans yet”, she replies nervously, her voice cracking with emotion.

The eagle has landed

It goes quiet. Footage at the Command Center shows an engineer calling the time as the lunar module descends towards the moon surface. His hands visibly shake as the world watches.

Aldrin narrates their landing. “Got the earth straight out our front window,” you can hear him say. Then, the sound changes. “Programme alarm,” Armstrong said urgently “ Houston, you’re looking at our Delta_ H. 1202, 1202.”

A “1202” alarm means the lunar module’s computer is overloaded.  If the problem can’t be corrected. The landing will be aborted.

Back at base, engineers scramble to locate the issue. A few seconds pass and Armstrong asks for an update. “If it does not occur again, we’re fine. We’ll go. Good for landing, over.”

The 300-foot high ridge directly beneath the lunar module is known as “last bridge.’ Armstrong flies the LM manually evading boulders as he scans their planned landing locations. With their fuel running critically low, flight director Gene Kranz back at the base gives a 60-seconds to abort warning.

“Faint shadow,” narrates Armstrong as they come into landing. “Drifting to the right a little”, says Aldrin.

After years of planning and building and imagining and practicing, they land on the moon. “Okay. Contact light.” Says Aldrin. “Engine shutdown.” “Houston, Tranquility base here. The eagle has landed,” says Armstrong in a voice wobbling with emotion. The crowds at home cheer, cry, hug. But the biggest moment is placing their feet on the moon’s surface. The tension doesn’t yet dissipate.

Armstrong opens the hatch and begins walking clumsily down the steps of the LM. He says those fateful words we all know by heart. “That’s one small step for man, one giant leap for mankind.” The time of 1.09. He is 38 years old. He is the first human to set foot on the moon. 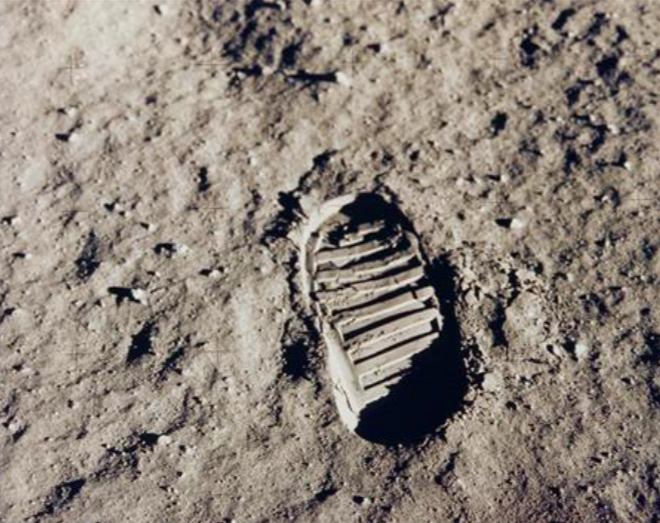 “Man should strive very hard to learn to live with his brothers and learn to take care of this small and very fragile planet we live on.”

In the astronaut’s descriptions of the first glimpse of their surroundings, they describe it as a “having a stark beauty all of its own.” Aldrin says it “different but very pretty out there – a magnificent desolation.”

The moon landing was the most important feat of exploration history in the world. Something that five years before was inconceivable. In an interview after the crew landed safely, Armstrong was asked about his unique perspective and his words still have deep resonance today.

“As we departed the earth on the way to the moon, I was impressed by the relative insignificance of this plant. We tend to think of it as a mammoth place that goes on forever and here is this one very small colourful body against this black backdrop that goes on forever.

I think it impressed me with that thought that man should strive very hard to learn to live with his brothers and learn to take care of this small and very fragile planet we live on.”

Moon rock collected on the moon is still being studied today. Our space conquering plans are ambitious, but we are just beginning to crawl. We are beginning to accept the challenge this universe has for us.

But this is just the beginning. Learning to master the space close to earth requires us to overcome all sorts of technological hurdles. The moon orbits 400,000 kilometres from the earth while Mars is 400 million kilometres away.

This is going to be a long process but our curiosity has no bounds. What happens in the next 50 years, and probably in our lifetime, promises to be truly spectacular.

Read more: What does the future of travel really look like?

Fig O’Reilly, NASA datanaut and beauty queen: ‘When are we going to stop minimising women to just one thing?’