Did you see Kaia Gerber’s massive hair moment at Valentino?

Most of today’s headlines read something like “Valentino’s gowns will take your breath away“, “Kaia Gerber’s runway moment…” and  “Valentino’s stunning collection…“. The Italian house held its couture showcase at Hotel Rothschild on Wednesday night during Paris Haute Couture Fashion Week. It was a fantasy overture from the opening, all the way to Creative Director Pierpaolo Piccioli’s standing ovation at the finale.

The exquisite collection saw seven models showcase 23 gowns varying in colour, drama and texture. It’s said that couture is supposed to “make women dream” and though some fashion critics believe this phrase to be overused, it captures the essence of Valentino’s mythology-inspired creations.

Today’s fashion is a never-ending parade of overly-priced trainers and hoodies emblazoned with (naff) logos. For that reason, haute couture might not seem relevant or have appeal to mass audiences. In truth, appreciating haute couture doesn’t require an encyclopedic knowledge of fashion, and quite simply, the gowns showcased are wholeheartedly divine to admire. Valentino’s collection appears light, airy and whimsical. Bouquets of real flowers are contorted and meticulously placed around the heads of selected models; reminding me of Salvador Dali‘s Woman With A Head Of Roses. With this collection, Pierpaolo Piccioli has reclaimed haute couture as his own.

Piccioli drew inspiration from folklore and mythology around the world; marrying an assemblage of abstract patterns and colours together in combinations that shouldn’t work, but categorically do. I wonder if anyone but an Italian would dare to reference so many different cultures and colours in one robust presentation? 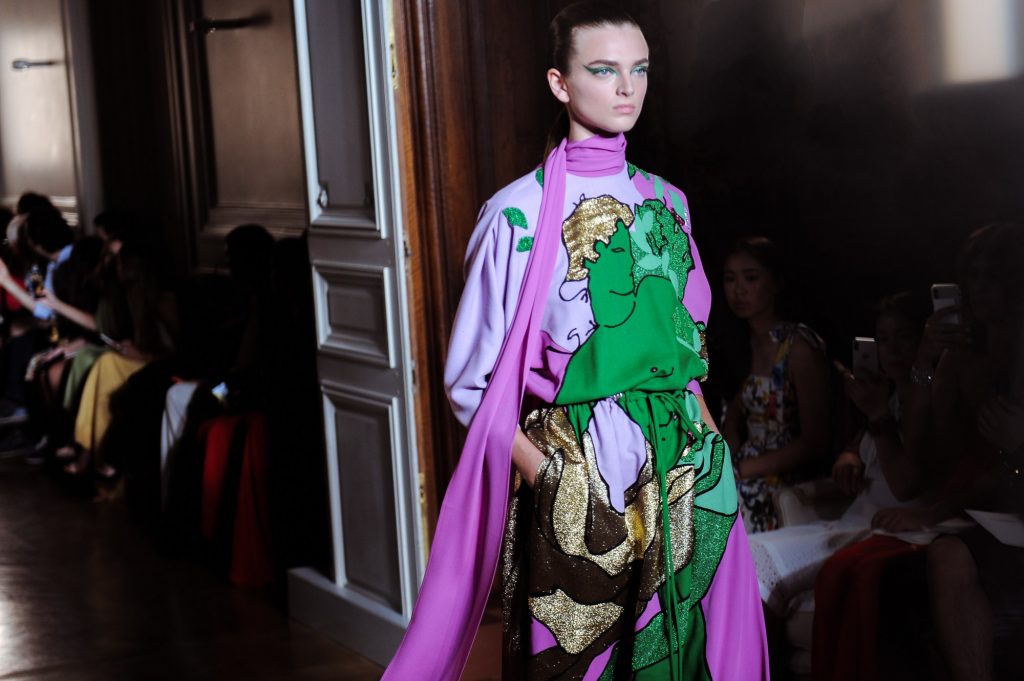 On the runway at the Valentino Haute Couture Fall, 2019 runway show at Rue Berryer in Paris, France on Wednesday, July 4th 2018. Photograph by Cleo Glover for W Magazine

Though there were many stunning points of interest, it was Kaia Gerbers flamingo-feathered, rose-coloured dress and higher-than-high hair that caught the attention of critics and photographers. Kaia Gerber is the daughter of models Rande Berger and Cindy Crawford and made her first runway debut last season at the tender age of 16. Valentino’s Instagram shows Kaia gliding in a show-stopping flamingo organza dress embroidered with pale rose feathers. It’s enchanting to see how the weight of the dress moves effortlessly and in tune with Kaia’s movements. It is a piece of art in every respect and mesmerizing to watch.

The sky-high and ultra-thick hair was crafted and shaped by the legendary hairstylist Guido Palau and colourist Josh Wood for Redken. Woods created the look by using a new balayage technique which he explained on his Instagram: “We created a new technique in balayage at Valentino: ribbon-lights. Thick, single pieces of hair that are freehand painted to create dimension and distinction, but still look natural. It’s hair colour that’s “better than natural”, a technique that mimics how hair is lightened by the environment, rather than in a salon. Our colour palette inspiration for this show was ‘biscuity brunettes’; chocolatey tones highlighted by delicious ‘rich tea’ ends”.

It took 50 wigs, 250 colour processes, 150 hours of prep and 11 team members, to create the massive hair moment for the show. 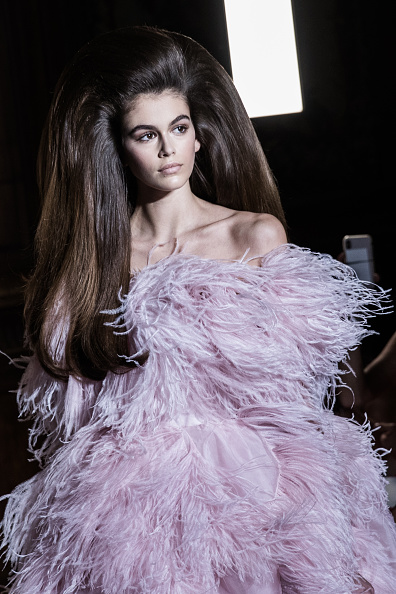