To all those who are convinced Meghan Markle is pregnant again…

It may be a welcome break from discussing all things Brexit, but this week, speculation over Meghan Markle being pregnant with her second child went into overdrive, threatening to overshadow her searingly honest interview with ITV.

The Duchess of Sussex’s every move since she exploded into Royal life has been under intense scrutiny. And while that is not unusual for a woman in her position, it doesn’t mean it is acceptable.

In recent weeks, we’ve seen clues to the pressure this scrutiny has placed on the young couple – Harry breaking down in tears at a recent children’s charity event when discussing his wife’s first pregnancy, Meghan’s emotional interview about the challenges of being a new mum in the spotlight.

Yet, we still treat this like another episode in the Harry and Meghan show.  The media has a responsibility to report what goes on, not publish zoomed in pictures of Meghan’s stomach wearing loose-fitting clothes and asking if she is pregnant again.

And maybe she is. It is highly likely, she will want a sibling close in age for little Archie Harrison.

In fact, maybe Kate is too – it’s been reported before that she said she would like to have a large family. Maybe there will be two more Royal babies to obsess about in 2020.

But, there is no getting away from the vulgarity that all this speculation has created – From the frenzy over Meghan wearing maternity clothes (She is STILL wearing them?) just a few months after she gave birth to her son, to Harry’s admission that he has been emotionally damaged by being brought up in front of the media.

“Read between the lines. It isn’t easy to give birth and have your every move commented on.”

Since the start of the Royal tour, Meghan has been wearing flowy tops and wrap dresses. Close-ups of her mid-section have been captioned with thoughtless comments about not losing the baby weight. 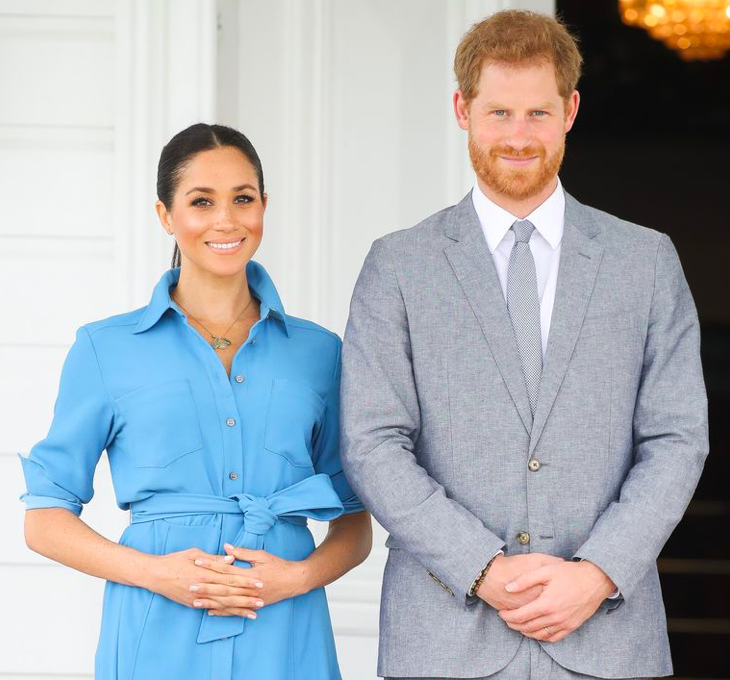 Here’s a thought… maybe she just wants to feel comfortable.

When I had my babies, I always wondered why there wasn’t specific ‘post-baby’ clothes to help you feel comfortable as you slowly transition back to some semblance of your previous body shape. As anyone who’s worn maternity leggings every day for 5 months will know, you would prefer to burn them than put them back on after you arrive home with baby.

Give the girl a break. Read between the lines. It isn’t easy to give birth and have your every move commented on – how she looks, how she’s holding her baby (WRONG! DANGEROUS!) her hair loss, her ’round’ face. Come on…

It should have been obvious to all in her recent interview for ITV, aired on Sunday, how damaging this process has been for the Duke and Duchess of Sussex. Meghan hinted that she was overwhelmed by motherhood and the exposure that came with it. Harry is clearly an emotional wreck, cowering in the spotlight.

“I fear for the mental health of a couple who seem hugely damaged by the coverage of events over the last few years.”

The clue is in how fiercely protective Harry has come out against the tabloid press. He is determined to protect his growing family from some of the exposures he felt as a child. The timing might not be a coincidence, but I fear for the mental health of a couple who seem hugely damaged by the coverage of events over the last few years.

Reports are that the couple are going to step back from public duty for a few months over Christmas and into the new year. And no matter the importance of duty and tradition, Meghan has a point – simply existing and not thriving isn’t any way to live. It is certainly not a good lesson to pass onto children. In fact, this is a lesson everyone should strive for, no matter your socioeconomic status. Responsibility is important yes, but not at the ruination of your happiness.

If Meghan is pregnant, it will no doubt be bittersweet. How wonderful to expand her family and have siblings so close.

Yet, the invitation to the public and media to focus all over again on her as a woman and a mother is a challenge.

With all power comes responsibility. But that works both ways. This is a woman, a new mother, in a new country, with her new husband, new job and a whole new world. Who would blame them for stepping back a little?

Live and let live. But we we have to keep obsessing, let’s hope it is only over the joyful parts, the nice things… like a brand new little life.

Read more: Why Meghan has sued the media

Read more: Our obsession with Kate has gone too far