New Bake Off: To Watch Or Not Watch?

So in case you haven’t heard (you’ve definitely heard) The Great British Bake Off is back tonight. The BBC’s most popular TV show announced last year it was upping sticks from grand old dame of BBC to the young, hip cool cousin, Channel 4.

And when it was initially revealed, it was more scandalous than Taylor’s Swift’s new single. Cast members jumped ship, Paul Hollywood was accused of following the dough (LOL), ITV quipped that Channel 4 had bought ?a tent and title?, and there were many, many “soggy bottom” references made.

So now that the sugar dust has settled on all that outrage and the new season is about to begin on Channel 4, how do we feel? Here’s a rundown of reasons to watch and not watch.

It’s a golden team-up, there’s no denying it. Noel Fielding is gas in a completely bonkers way, while Sandi is so rapid-fire quick you know they’re going to be zinging off one another. I’d write more on this subject but I don’t have time as I got side-tracked watching clips of him on Big Fat Quiz Of The Year – aka the only good thing about Big Fat Quiz of the Year.

NOT WATCH No More Puns

Listen, as you can see from this piece, I love a good pun. And so do you, so don’t hide behind your university degree, your obsession with Twin Peaks?and how OBVIOUSLY the timeline was skewed in Christopher Nolan’s Dunkirk. 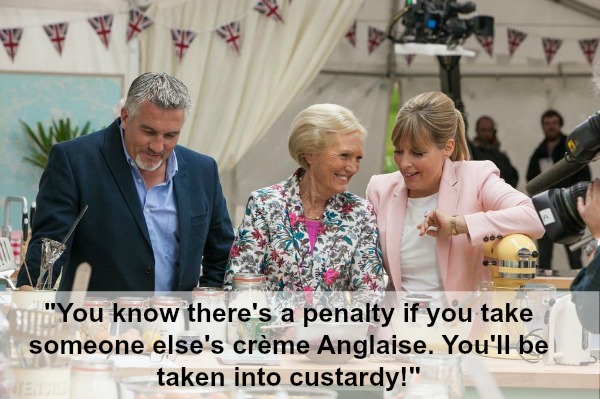 If you don’t stifle a snigger at ?custardy? there’s something wrong with you. And supposedly Channel 4 are ‘reducing the heat? on the rising punnery. It seems like Noel Fielding is made for smutty puns, no?

Considering the absolute OUTRAGE that Bake Off had sold its soul, reviews for the new show have actually been quite kind. Taking all the elements that made the show such a success with only a few minor tweaks and, of course, the dreaded adverts so distasteful to BBC stans.

Not just because he followed the money (although, kinda). But there’s also’something undeniably irritating about him – previous contestant Roby Tandoh referred to him as a ?peacocking manchild?, which is pretty bang on. Would not be surprised to see a Simon Cowell-esque muffchest in this new season either. This is Channel 4 after all? Oh, apparently my claws are out?

this, from a man who turned up to work revving a rental lamborghini. or was it a ferrari. i don’t remember, the air was thick w testosterone

WATCH / NOT WATCH The Hysterics Of it All

Depending on which side you fall on (or which side of the Irish Sea you claim allegiance to) the hysteria around the move has been fairly comical. There were ?BREADXIT? headlines, suggestions that we should expect a ?Naked Celebrity Bake Off Benefits Island? courtesy of Channel 4, and then Mary Berry, Mel and Sue triggered their own Artic Roll 50’s and THIS IS THE COLLAPSE?OF BRITISH SOCIETY AS WE KNOW IT! Never has Twitter made for such excellent end-of-the-world reading, especially with the hindsight of Prez Trump. Oh such wanton naivety!

The rest of the world looks at the UK dealing with the Great British Bake Off moving to another channel. #gbbo pic.twitter.com/Mn7O3rahNv

As your mother would say, it’s only a show and it’ll be better before you’re married. Plus, you know you’re going to have a peek no matter what, like taking a sneaky glance at an ex-boyfriend’s Instagram ??we are all weak, accept it.