attends the 2016 Vanity Fair Oscar Party Hosted By Graydon Carter at the Wallis Annenberg Center for the Performing Arts on February 28, 2016 in Beverly Hills, California.

Hilary Swank’s week as gotten off to an excellent start.

The two-time Oscar winner announced on social media that she and her partner Ruben Torres got engaged on Tuesday. The pair have been together since last summer when they met when he was giving her tennis lessons and things quickly heated up. What an adorable movie-esque meet-cute!

And it looks like the proposal also took the?Million Dollar Baby actress by surprise, writing “Went on a hike and this happened!”, while flaunting an absolutely’stunning emerald cut engagement ring and a huge smile.

Went on a hike and this happened! I am so happy to share with you all this exciting and incredible news… the engagement to my dear Ruben!!! #Engaged

She later went to Twitter to share another sweet shot of the two of them celebrating with a kiss at sunset.

Swank was previous married to Chad Lowe (aka Aria’s dad in Pretty Little Liars)?for ten years from 1997 to 2007. The couple originally announced their separation in 2006, with both of them saying they were working on getting through the rough patch. 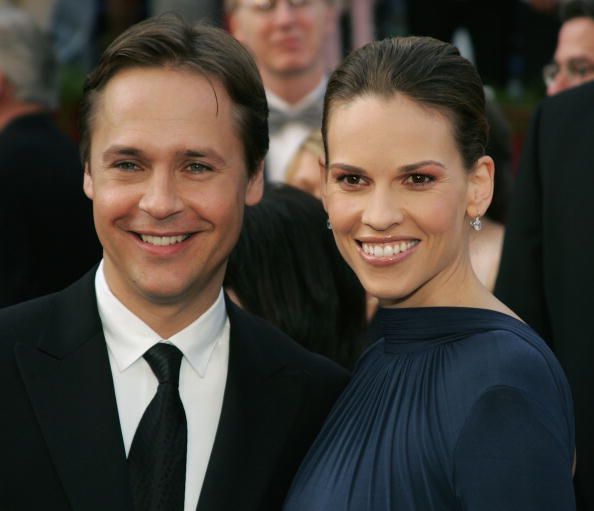 Swank said at the time, “We’ve been together for over 13 years, and there’s a lot of love there”. However, they eventually filed a year later Swank went on to date her agent John Campisi before finding happiness with Torres.

Congratulations to the happy couple!