In life, it’s often said that we hear and listen to those who would shout the loudest. But as we know, you can say very little and make the biggest impact; your actions can speak louder than any words you choose to utter.

The perfect example of this in recent weeks would be the story of a remarkable Irish woman from County Laois who chose to leave €30 million to Irish charities in her will.

A family archive on Elizabeth O’Kelly from Stradbally, who donated her €30m fortune to five Irish charities, has been described as a “treasure trove” of information on the “fascinating and deeply private woman.”

It offers us a glimpse into the life of one who very much wanted her actions to say everything about the woman she was.

Earlier this month, it emerged that Elizabeth O’Kelly, who was 92 when she died,  gave an equal €6 million donation to five charities, including the Irish Kidney Association, the Irish Heart Foundation, the RNLI, the Irish Society for Autism and the Irish Cancer Society.

The archive across eight boxes contains diaries, photos, letters, travel journals, sketch-books, legal documents, postcards and financial material, and includes a wedding day photo of 21-year-old Elizabeth O’Kelly and her husband, Major John William O’Kelly who was 41 years her senior and a heartrending and beautiful sketch of Elizabeth when she was a toddler by her mother, Alice Marie Sykes.

Her early life was struck by tragedy as Ms Berry writes.  Born in France in 1921, Elizabeth’s English father, Otway Richard Sykes, French mother, Alice Marie Hubert, and infant brother Richard had all passed away by the time she was just two years old.  “Her paternal aunt, Annette Kathleen Sykes, was awarded guardianship of Elizabeth and the young girl moved from France to her aunt’s residence at 39 Lower Leeson Street in Dublin, Ireland. Elizabeth’s upbringing was steeped in French culture and she experienced a simple and frugal life in the care of her aunt.” In 1944, however, tragedy was to strike again with her aunt’s death, and it was then Elizabeth married her husband.

“After their wedding, the couple moved to Ballygoran Park in Maynooth, County Kildare. Elizabeth had a great interest in history and architecture, and became actively involved in the Kildare Archaeological Society during her time in County Kildare. Attending many gatherings, she was also a familiar face at events organised by the Irish Georgian Society throughout her life,” Ms Barry writes. 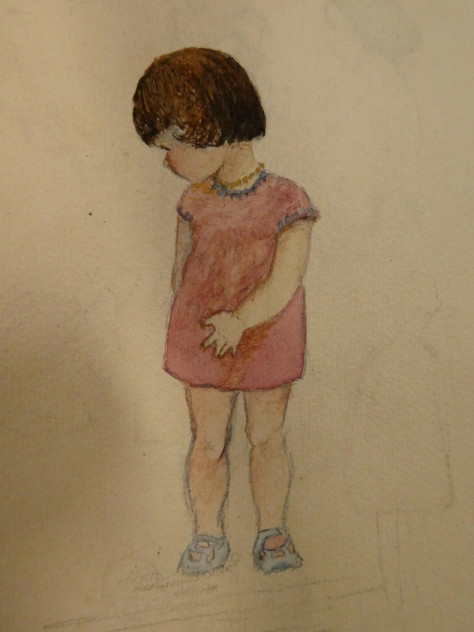 Sketch of Elizabeth as a young girl by her mother, Alice Marie Sykes, c. 1925 via MU Library Treasures

“Elizabeth was born into wealth, however, she also accrued a personal fortune of her own through investments. Despite such wealth, Elizabeth lived a simple and humble life devoted to the church and to helping others. Her only indulgence was a great love of travel which she enjoyed throughout her life,” she added.

Throughout the glimpse of the archive, we get a sense of a woman who lived to travel and take in the richness of different cultures and was devoted to her friends and family. Indeed, some of the most poignant items are the carefully drawn paintings of Elizabeth by her mother Alice, which Ms Barry said went with Elizabeth wherever she travelled.

“The family archive had a very special meaning to Elizabeth throughout her life, and she kept it with her, carefully organised, wherever she lived. The care and respect that she showed for her documentary heritage will continue now that it has been deposited in Maynooth University Library, and this important collection will be safeguarded for generations to come.”

It seems a fitting way to honour the woman who thought only of giving something back to those most in need, and didn’t look for anything in return.

Main image of Photograph of Elizabeth with a lion cub, c. 1930s via MU Library Treasures