Atelier Versace, Schiaparelli and Christian Dior have kicked off the Paris Spring/Summer 2016 Couture fashion schedule, but it was the Chanel show today that got everyone talking.?Karl Lagerfeld turned the?Grand Palais into an eco-friendly zone; the runway was made up of sprawling green lawns and a modernist?wooden house – not quite a?traditional backdrop for couture, but when did?Lagerfeld ever play by the rules? The theme began to make sense as the models made their way around Chanel’s garden, with Vogue describing the collection as “a celebration of nature, which gave rise to a bucolic springtime wardrobe, comprising a lot of beige.”

“Gabrielle (Coco) Chanel was the queen of beige,? said?Lagerfeld, and it was obvious the focus was on the Chanel suit, which featured “neat fitted jackets with oval sleeves partnered with skirts of varying silhouettes, from strict and midi length pencils to full skirts and breezy, wide culottes.” The collection is breathtakingly beautiful; each piece timeless and elegant as only Lagerfeld can create.

And of course, no Chanel Haute Couture show would be complete without featuring three models of the moment and the breakout stars of 2015: Kendall Jenner, Gigi Hadid, and Bella Hadid.?Kendall has been a mainstay at Chanel for a few seasons now, even closing their last show but this was’sisters Gigi and Bella’s first time walking in one of the brand’s couture events.

The hair and make-up evokes a modern-day princess Leia – complete with a trademark twisted?chignon – and an amazing take on the cat eye:

Jenner wore a stunning Oscar-ready black gown (which you can see in our gallery), which will no doubt end up on the red carpet at some point during award season.

The event was quite the spectacle, with all eyes on the runway, until?Cara Delevingne’s adorable dog Leo almost stole the show. He was so excitable they had to remove him from the front row, but we can see why all the fuss was made. Just LOOK at him.? 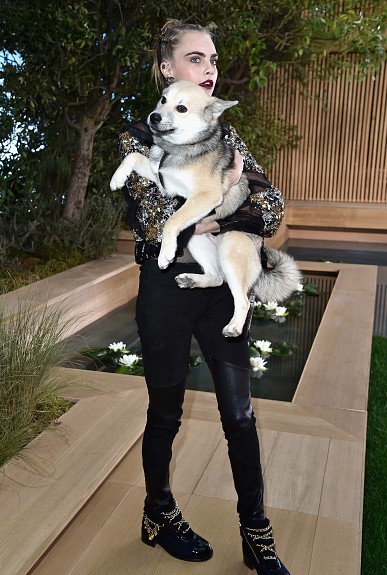 And finally, we got to see this:

Because who says you can’t twerk (like a boss) in couture?

Check out all the snaps in our gallery above.