Yesterday saw Karl Lagerfeld present the Chanel Autumn/Winter 15/16 collection in his usual Grand Palais locale. A few weeks ago, the Palais became a blooming garden of intricate gowns for couture week. Remember that wedding dress that closed the show? Or the handsome male model gardeners? 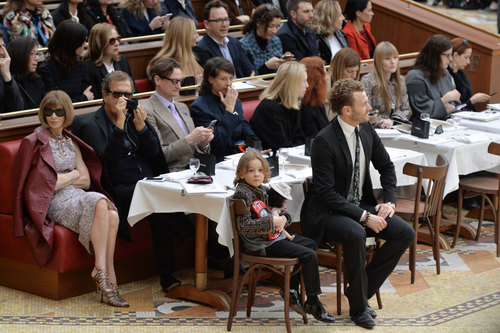 This time round a Parisian bistro popped up, and some of the leading catwalk models of the world propped themselves up along one of the most-watched bars in the world.

Brassiere Gabrielle was staffed with impeccable looking waiters while models sauntered in, posed, and took their seats. Inspired by the Caf? Society of the first half of the twentieth century that made Paris the capital of culture and conversation, the clothes on display harked back to the era that saw Coco Chanel’s business take off and define the fashion agenda.

Of course there was tweed, with dashes of Karl’s modern sensibility with quilted jackets and a daring mixture of textures. The 1970s also made an appearance with flares and medallion belts giving off a sexy retro vibe. 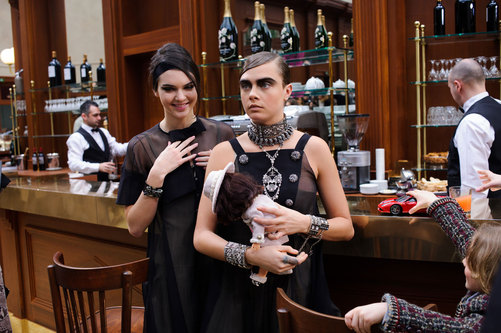 However, we weren’t too keen on the make-up. While some might say those smokey eyes reflect the heady days of Paris that saw Zelda Fitzgerald and Ernest Hemingway debate the night away, we were reminded of our first foray into eyeshadow palettes as awkward teens.

Not only do we love a bit of Florence and the Machine, but lead singer Florence Welch is one of our most beloved style icons. She is also to blame for any flirtations we may have had with red hair dye. That suit? Inherent Vice in a cooler climate. Welch is busy promoting her new album, How Big, How Blue, How Beautiful. She’s been very candid in interviews of late, admitting that her hectic schedule put her on the road to a nervous breakdown. It’s great to see her looking so good.

Poppy Delevingne was out to support her younger sister, Cara. Of course she wore Chanel. Might her blonde tresses knock Blake Lively’s off the hair crush list?

Lou Doillon wears a kimono and jeans to a Chanel runway show and gets away with it. Life isn’t fair, but it’s an entirely different story for the unofficial princess of France. Should we add Lou to our fringe inspiration list?

Everything about this Caroline de Maigret photo – the pose, the outfit. When we win the lotto we’re moving to Paris.