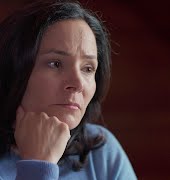 When writer Caitlin Meredith didn’t have a period for over two years, doctors dismissed it as “no big deal”. But when she did her own research into why it may have stopped, she was forced to confront some hard truths about her attitude to her body.

My breasts are swollen and achy. I’m irritable, I’m knackered. I’m so ravenous that I’m considering buying a marble run to load Maltesers into just so I can lie on my back with a hot water bottle and have chocolate directly deposited into my mouth.

No prizes for guessing that I’m on my period. But, contrary to what you might think, I am absolutely thrilled about it.

When I was at university, the oncoming of my period was always met with a groan and an eye roll; a deep-held resentment for a week of forking out for sanitary supplies, acne breakouts and trying to pass off ‘is there anything on the back of my trousers?’ as being a totally normal question that normal people ask four times a day.

I wasn’t a big fan of my period, it was just something I tolerated. But today, I find myself counting down the days until it arrives, excitedly logging my PMS symptoms into a tracking app. Acne? Yes! Hungry? Extremely! Demotivated? You betcha!

Nothing. Not a drop.

The about-turn in feeling this way about my menstrual cycle is new, and very much a case of not knowing what you’ve got until it’s gone. From the ages of 22-24, I didn’t have any periods at all. Nothing. Not a drop. Despite menstruating regularly from age 12, once I graduated from university, it seemed that I had finished with my cycle as well as my studies.

At first, it was a bit of a boon, not having to worry about it coming on as a surprise or having to buy tampons, but after a year of fruitlessly wishing and willing my period to come back, I finally submitted and visited a doctor — or rather, doctors.

In my first spate of trying to sort out the issue, I visited three different GPs. ‘You came off the pill a few months ago — it’s fine’, I was told by one doctor. ‘It’s nothing to worry about’, said another. ‘Well, you don’t want kids yet. Come back in a year’, said the third.

If a course of treatment was offered, rather than just crossing my fingers and waiting it out, it was suggested that I go on the contraceptive pill to kick-start my period. I was reluctant to do so because I really wanted to get to the root cause of the issue, and so I waited and waited, and, thinking that there must be a reason why my period had disappeared, I did a bit of my own research.

During that time I discovered the book No Period. Now What?, which documents the extensive research of Dr Nicola Rinaldi on a condition known as hypothalamic amenorrhea. Hypothalamic amenorrhea is one of many reasons why women can lose their period and occurs when the hypothalamus (a section of the brain that controls hormone release, amongst other functions) stops emitting the hormones necessary to trigger ovulation, making the menstrual cycle redundant.

The book is a look into the data Dr Rinaldi collected from over 300 women worldwide who had experienced hypothalamic amenorrhea, along with her conclusions and advice on how periods can be recovered.

Studying women between the ages of 19-44, her research showed that hypothalamic amenorrhea could be put down to a number of factors, including eating habits, exercise, weight loss, stress, and genetics. Most telling for me was that Dr Rinaldi’s research demonstrated that 82% of the women surveyed ‘had lost 10 or more pounds prior to acquiring HA’.

I couldn’t deny my inkling as to why I had lost my period any longer. In the months leading up to my losing my period, I had embarked on a post-uni, post-eating-Crunchy-Nut-cornflakes-for-most-meals diet. Initially, it was meant to just be to lose a few pounds, a symbol of graduating from my degree and into full-blown adult womanhood. But counting calories and logging workouts quickly developed into a full-blown disorder.

I was exercising compulsively five times a week; not because I enjoyed going to the gym, but because I was terrified of what would happen if I didn’t go. My diet was extremely restrictive, cutting out major food groups, preaching the gospel according to cauliflower rice and, inevitably, bingeing on anything and everything I could lay my hands on once a week.

I was already relatively slim, but shed about 15% of my body weight and a lot of body fat, as well as losing some hair, my sex-drive and my marbles. When I think about it now, my lack of a period during this time makes total sense. I wasn’t supplying my body with nearly enough energy to function properly, let alone compensate for the excessive amount of exercise I was doing.

As a result of the dieting, my body was under an intense amount of psychological and physical stress. In an effort to keep everything ticking along, slowly but surely, my body started to cut off the energy-intensive functions that weren’t crucial to survival — my menstrual cycle being one of them.

Although many women are able to menstruate and become pregnant at a lower body weight than I was at the time, the rigid control and restrictive measures I was subjecting my body to meant that my personal biology was barely coping with keeping my body going, let alone being able to create and sustain another life.

Whilst in the thick of disordered eating, it never occurred to me that my intensive exercise and restrictive eating habits could be the cause of my lack of a period. After all, I wasn’t nearly as slim as half of the girls I was following on Instagram, whose diet plans I read and workout routines I tried to emulate, all in the name of ‘health’.

I was also under the impression that it was only women with severe anorexia who lost their periods, the women who were all consumed by their illness, skeletal and hospitalised.

As I had never slipped outside of the ‘healthy’ parameters of the BMI scale, my eating and exercise habits were never scrutinised by me or the doctors I saw. During that time, when my priority over anything else was being thin, I thought that not having a period paled in comparison to the problem of keeping off the pounds, and the doctors’ lack of reaction reinforced my conviction that this was fine to carry on the way I was.

After a particularly eye-opening incident where I actually started crying when thinking of the prospect of eating pizza (it’s only tears of joy these days, I assure you), I finally started to pull myself out of disordered eating and as a result, revisited the GP, this time armed with the information from Now Period, No What?. Even though having a period isn’t crucial to survival, surely, I thought, it’s a sign that something is not right.

Luckily, doctor number four agreed that the stress of constant exercise and weight loss were probably contributing to my amenorrhea, and asked that I start eating some more, and come back to the surgery after I had gained some weight.

Putting on the weight, eating more and exercising less was a whole mental battle of its own, and it took another year of ups and downs and ultimately showing my body that I wasn’t going to thrust it into a carb-free famine again for my period to kick back into action. And God, was I elated when, on that cold December morning, I woke up to blood.

More than a year on from that day, I genuinely feel that same happiness every time I get my period. Honestly. I know it sounds trite, but I am so appreciative of my period these days. To me, my monthly cycle has come to symbolise so much more than just everything is functioning properly, reproduction wise.

Every month, it’s a reminder to me of the decisions I made to challenge my disordered eating for the sake of my mental, physical and reproductive health. It’s a reminder of how hard I fought to have my symptoms recognised and diagnosed, even when I was told not to worry. It’s a reminder of how every day, I tackle my disordered thoughts and choose to do right by my body: in eating what I want, exercising because it feels nice, resting when I need to and accepting my body as it is, even if it means forking out for tampons.

Read more: Menstruation shame: This is why we are all so afraid of seeing period blood on TV

Read more: ‘The sight of blood anywhere is frightening – in your pants, it’s terrifying’

From being engaged to a partner 30-years your junior, to couples living apart entirely – Michelle Heffernan speaks to people in “irregular” relationships and asks relationship therapist Natalya Price if we really need to fit a mould when it comes to love.

Wondering if your relationship has run its course? There are...

Need a plan for the Easter weekend? Sign up for the virtual Hop’n Run 5k for Pieta House

Why we have cravings and how to prevent them

Filomena Kaguako: Burlesque reminded me that I am sexy, and my own worst enemy

After being in a room full of strong women drawing upon the audacious confidence of burlesque, Filomena Kaguako found her confidence