Mohamed Bzeek describes his actions as his life’s mission. The 65-year-old former Libyan immigrant has dedicated his life to taking in the children who have nobody else in their final weeks on this earth.

Over 40 years ago, Bzeek arrived in the US to study electronic engineering. He married his late wife and became a citizen in 1997. The widower now lives in Los Angeles where he is one of the only foster parents who cares exclusively for terminally ill children. His story made headlines last year when the LA Times ran a story about his work.

“Ten children lost their lives in my arms.”

He was awarded the International Benevolence Award by the Diyanet Foundation and his life has just been made into a documentary directed by Ensar Altay.

“In 1995, we decided to adopt orphans left at hospitals or taken from their families by the state because of violence and pressure” explained Bzeek who was once a marathon runner before he came to America. “The only house that accepts orphans and children who are about to die in Los Angeles is my house. I have dealt with 80 children since 1989. Ten children lost their lives in my arms.”

The Department of Child Services in LA work closely with Bzeek. “They tell me when children are about to die and ask if I can adopt them. They know that I do not hesitate to accept. If I don’t, they are sent to hospitals and don’t have a family or house. However, when I take them, they feel a family atmosphere. They feel safe and are loved until the end of their lives.”

In many cases, he gives the children names as well as shelter and love. “In the hospital, they give birth, they leave them,” Bzeek said in an interview with the LA hospital. “Their families don’t name them. It comes on the paper: ‘Baby boy,’ ‘Baby girl.’ I name them. I give them names.”

Sophie Keefer works in paediatric palliative care. She recently met with Mohamed and wrote about her experience for the International Children’s Palliative Care Network.

“He was a bear of a man with a long beard and a soft smile.” Sophie wrote. “His foster daughter was propped up on the couch. When Mohamed went to hold this small, fragile, girl he warned me that she occasionally has seizures and if I was holding her while this happened, to just keep holding her and it would quickly pass. I appreciated how calm and matter of fact the conversation was, allowing me to hold her with confidence, prepared for whatever her body would do.

She’d had an encephalocele which meant that at birth part of her brain protruded through an opening in her skull. She cannot see, hear, speak or move. She can, however, feel and respond to touch. When you stroke her gently she relaxes and as you cradle her body, it moves in sync with yours”. 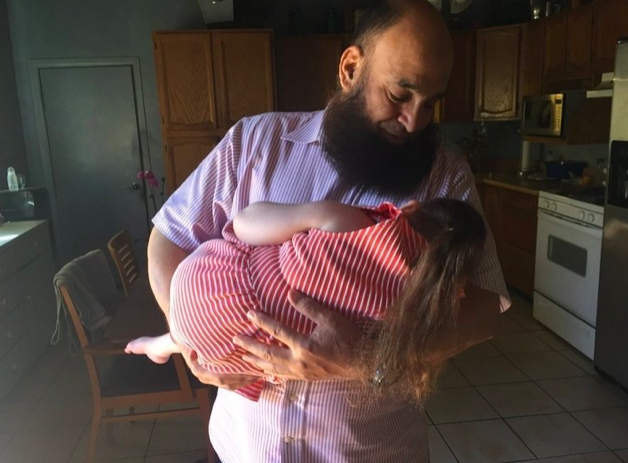 Bzeek took in the little girl when she was just seven weeks old. He was told she would only live a few months. Today she is six years old. The county took her from her biological parents. His own biological son Adam (19) was born with the challenges of brittle bones and dwarfism. He has broken almost every bone in his body at some stage.

Bzeek says caring for those who are so ill is a painful process. He knows their time together is precious. “I know it’s heartbreak. I know it’s a lot of work and I know it’s going to hurt me sometimes. You know, I feel sad. But, in my opinion, we should help each other, you know?”

Sophie says that Mohamed cooked for her in his immaculate kitchen and spoke more about religion and the importance it plays in his own life. “I’ve been told that my story has touched others and built their belief in humanity again – that it’s changed their perspective of Muslim-Americans. I like to think of it as true Islam, it is about love and compassion and sympathy for others. If I can help somebody, I have to help.”

For the past three years, Mohammed works with a nurse who comes everyday so he can take small breaks, run errands and pray at his mosque. After the LA Times article, he received a lot of media attention.  One online commenter called Bzeek the Muslim Mother Teresa, another opened a GoFundMe account on his behalf; he didn’t learn of it until the company contacted him. The donations will be a boost to the $1,600 a month he gets from L.A. County. He plans to put the money toward some essential home improvement, starting with installing air conditioning.

Now, he has his own health problems. Last year doctors told him he had stage-2 colon cancer. In an interview with the LA children’s hospital, he described his reaction to the news. “I had no family with me and I was scared,” he says. “I felt the same what the kids feel. They are alone. If I am 62 and I am scared, what about them?”

Image via Guardian of Angels

Read more: Woke Daddy: How to be a true feminist father

Read more: A letter to my father who’ll never read it

‘Stereotypes run deep in people’: The extraordinary CRIP CAMP documentary is a must-see

Lisa Nolan recently quit her job to become a full time mum. She no longer feels like "a non-engaged employee and a half-arsed mother". But now she asks, is she a lesser version of herself because of her choice?

‘I haven’t had an on-time delivery in weeks’: The grim reality of online shopping post-Brexit

Psychologist and author Niamh Fitzpatrick knows only too well about loss and grief. Here, from the IMAGE 2020/2021 Annual, she shares her mental health strategies, for when life isn’t what we expected.

I’m a dad, a bewildering term, and while nine months...

When it emerged when week that the Cabinet Sub-Committee on Covid-19 has no women sitting on it, many were disappointed but not surprised.

For far too long, the concerns of women have fallen...