"I will have my hands held by a total stranger in a nail salon but my partner couldn’t hold them while I was in labour."

"I will have my hands held by a total stranger in a nail salon but my partner couldn’t hold them while I was in labour."

Justine King shares her experience of giving birth to her first child during Covid, without the support or advocacy of her partner Conor

It seems so trivial now but in the lead up to my baby’s birth I had half-jokingly warned my partner Conor about photo sharing etiquette. “You can take pictures of me and the baby right away but don’t share them in WhatsApp groups! I’ll approve the first photo to send and I don’t want to be in it all sweaty after labour!”

The naive expectation being that Conor would be there to take our picture.

Instead, the sweaty post-birth photograph of me and my baby is a selfie taken four minutes after I gave birth. A selfie because in that moment we had no one else to take the first photograph of us together. In August 2021, that sweaty selfie that no one was supposed to see was widely shared across social media and news platforms. Along with many other Irish women, I decided to share my picture and experience on Instagram as part of AIMS Ireland’s 24 hour protest to end Covid maternity restrictions once and for all.

We were so excited when we found out I was pregnant with our first baby in August 2020. It felt like a bright star amidst the darkness of the previous few months of lockdown. Both of my sisters gave birth just before the first lockdown and I had friends who had laboured alone, another who spent five days in hospital post C-section without any visits allowed from her partner or anyone else. It didn’t even cross my mind that Covid restrictions would still be in place when I was due to give birth the following April.

Other than my anomaly scan which Conor was allowed to attend, I went to my 12 week scan and all of my appointments alone. This really didn’t bother me and I often said aloud that perhaps it’s easier to accept on your first pregnancy because you don’t know any different. But the reality is that my scans were all happy moments, with or without a partner. I left the hospital every time with an updated photograph of our thriving baby and met Conor in the car outside with excitement and good news. If we had received bad news it would have been entirely different – it would have been inhumane to be in there alone.

We were so excited when we found out I was pregnant with our first baby in August 2020. It felt like a bright star amidst the darkness of the previous few months of lockdown.

As my due date got closer, it was made clear to me that Conor would not be admitted to the hospital until I was 4cm dilated and moved to the delivery suite so, like thousands of other women before me, I would labour alone in the prenatal ward until then. I was as mentally prepared for it as any first time mother with no idea what to expect of labour. I had practised hypnobirthing, spent weeks filling my hospital bag with lavender oils and face mists and making labour playlists on Spotify. Conor had packed me a handwritten letter with words of support to keep me company until he could be let in.

We played by the rules. We restricted our movements in the two weeks before the birth, wore our masks, washed and sanitised our hands continuously. Both Conor and I already had Covid last Christmas and according to recent advice released by NPHET, have antibodies for at least the following six months. Still, I took the mandatory Covid PCR test in the hospital the day before I was admitted and we asked if it was possible for Conor to take a test too but were told they didn’t have the capacity for that. A fact I still can’t understand when PCR tests are readily available everywhere.

I laboured at home all day with Conor for as long as I could before going to the hospital at about midnight. That was the hardest moment in all of it. The hospital was dark and mostly closed up downstairs except for two security men. I was in pain, already exhausted and when Conor carried my bags and birthing ball to the entrance he was told to drop them at the door and leave. They asked me to put on my mask.

When I was assessed and told I was only 1cm dilated I texted Conor who was outside in the car to go on home to bed. We live ten minutes from the hospital and they said they would break my waters the following morning. Thank God for my sister in America and the time difference so I had someone to text through the long hours that followed and not feel totally alone.

I was in pain, already exhausted and when Conor carried my bags and birthing ball to the entrance he was told to drop them at the door and leave. 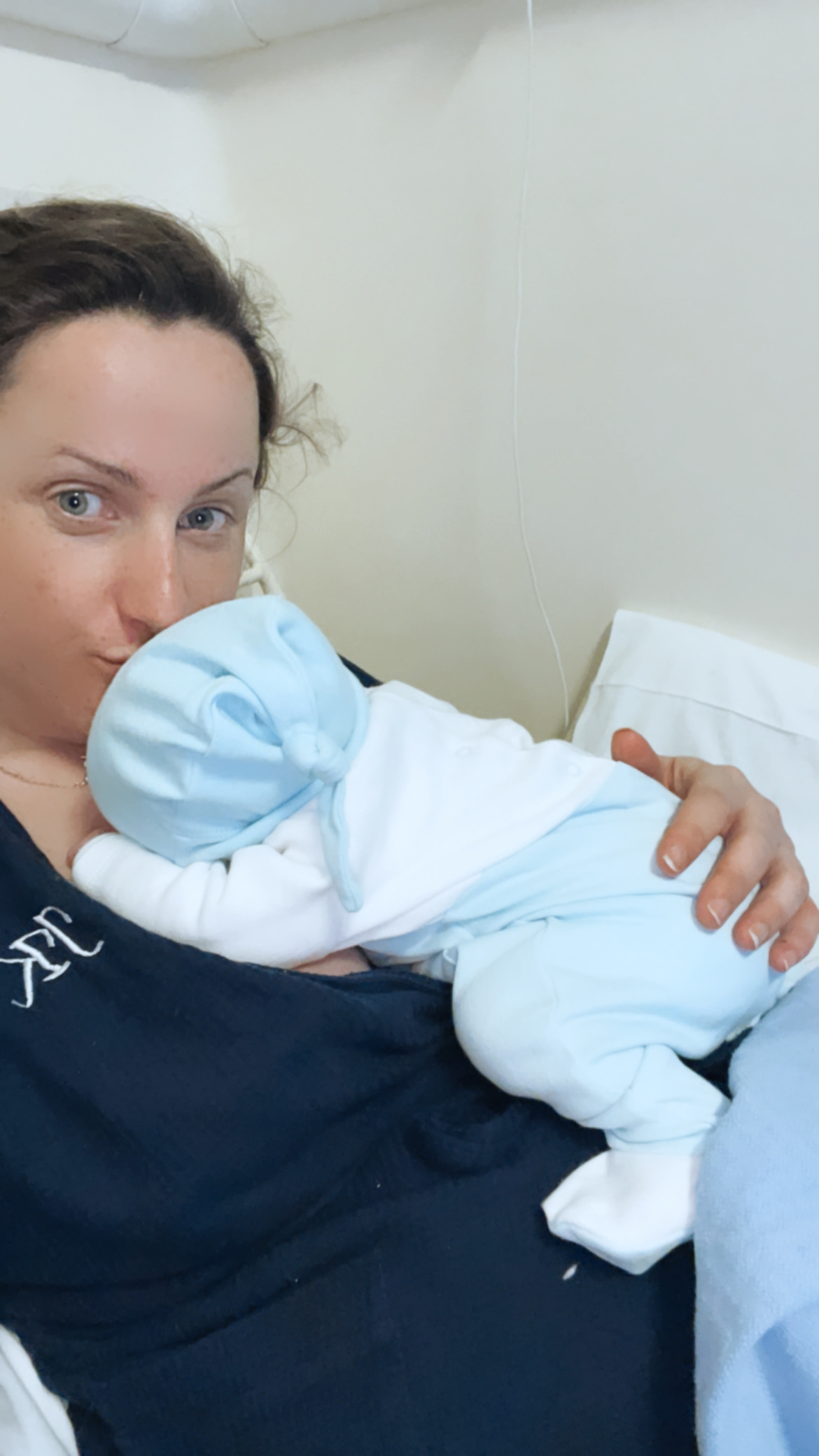 At 3am my waters broke naturally and I sat in my drenched sheets for 20 minutes waiting for a midwife to check on me. It struck me how busy they were and how much easier this would be for everyone if we had partners to at least perform the simple tasks of getting us water, helping us to the toilet etc. The pain continued to intensify over the next few hours and after an hour alone in the bath I had finally reached 4cm and was moved to the delivery suite for the long-awaited epidural. I texted Conor to make his way in. But things progressed rapidly and the baby’s head was crowning. There was no time for an epidural, no time to wait for Conor to get there. Eight minutes later our little boy was in my arms. Conor arrived in shortly afterwards, in time to cut the cord.

We made a joint decision on the spot not to dwell on the negative. We were so blessed to have a healthy, beautiful baby. We weren’t going to make him missing the birth the narrative of the most important moment in our family’s life to date. This was to be a happy day, a time of celebration. And it was. But Covid restrictions prevented us from sharing the moment we had dreamt about for so long, the birth of our first child.

For Conor, the time of birth was important. I overheard him ask the midwives more than once if it was 6.46am or 6.48am that he was born. I could read the thoughts flicking through his mind. How many minutes did he miss? If he had driven through a few red lights would he have made it on time? Maybe if he had dumped the car in the set down area instead of parking it in a proper space? I reminded him repeatedly in the hours and days that followed that this wasn’t his fault. “You weren’t late. No one could have predicted how fast this would happen. There’s no one to blame”.

But we can point blame. I blame powers that be in the HSE and Government Health Department who have had 18 months to come up with a solution to ensure this situation did not have to happen. A solution that ensures women are supported by their chosen birth partners at every stage of their maternity care. Having your partner by your side in labour is not a luxury, it’s a basic human need. We understood when they applied these crisis measures across all hospitals in March 2020 on the basis that no one was prepared for the scale of this pandemic. But a year later, after the entire country had adapted to living with Covid-19, from huge global businesses moving to a work-from-home model to tiny local shops moving their businesses online, how had we still not progressed past the lazy blanket ruling that means women are forced to labour entirely alone?

I blame powers that be in the HSE and Government Health Department who have had 14 months to come up with a solution to ensure this situation did not have to happen.

I didn’t share my experience on Instagram to get mass sympathy, I didn’t need it. We got our happily ever after, a beautiful baby boy with no health complications that we could take home 24 hours later. But what about those who aren’t as lucky? Since sharing my post I’ve received so many heartbreaking messages from the women this country has failed and continues to fail. The woman who birthed her stillborn baby alone. The woman who suffered two miscarriages alone. The woman admitted with broken waters in the middle of March who didn’t see her partner or toddler again until the end of April. The mothers and fathers who must abide by visiting hours to go and see their tiny sick babies in the neonatal ward.

Parents are not “visitors”.

And yet, the world keeps turning. In August 2021 I booked in to get my highlights done and it occurred to me that I would have my hands held by a total stranger in a nail salon but my partner couldn’t hold them while I was in labour. And in October, the hum of busy pubs and restaurants returned and many of us took the long-awaited foreign holiday while women across the country continued to labour alone. We prioritised the reopening of nearly every other industry bar nightclubs and ignored reinstating essential support at the most basic human level. We simply cannot continue to let pregnant women down when they are at their most vulnerable. We can and must do better.