Ask the Audience: ‘The working world will never be the same again and that makes me kind of sad’

We asked the IMAGE audience their thoughts on the current working model and whether they prefer working from home, hybrid working or being back in the office best.

The onset of a global pandemic wreaked havoc on the working world, with people in all different industries all across the world, forced to uproot their office setup and move home instead. Stringent lockdown conditions are, thankfully, now a thing of the past, however, the working world still looks vastly different to how it did. 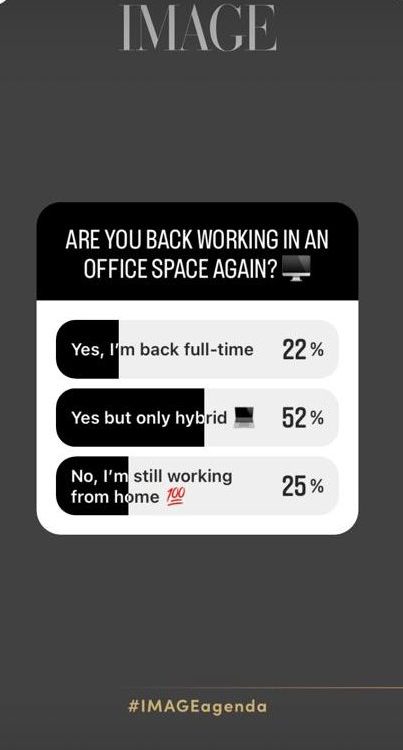 For some readers, working from home is ideal – particularly for parents who no longer have to worry about time lost getting to and from the office. “As a mam, working from home is more productive career-wise,” one reader noted. “You don’t have to factor in a commute anymore.” For others, hybrid working appeals to them more, though the loss of that old office culture is something they grieve too. “[The working world] will never be the same again. That makes me kind of sad even though I do enjoy hybrid working.” Another reader told us that they took this opportunity as the push they need to finally quit their old job and start their own business.

While working from home inevitably has its perks, many cited loneliness as one major detractor from the lifestyle. “Working from home is lonely,” one reader pointed out. “I get my energy from being around other people so being alone for most of the day is quite draining. Even creativity-wise, sometimes it’s those water-cooler conversations that help to spark another idea. Walking around and seeing what other people are doing/working on really helps in that department.”

In terms of what the typical workweek will look like going forward, new research suggests that a four-day workweek could be a reality sooner than we think.  Ireland joined the global campaign for a 4-day work week back in 2019, but recent statistics compiled by Hays Ireland, the leading recruiter examining over 1,500 employers across Ireland, found that over half of Irish professionals believe that a four-day workweek will become a reality within the next five years.

Ireland first began calling for a reduction in working hours almost three years ago, however, the onset of the pandemic and a newfound reliance on hybrid work models means that the campaign has only gained momentum since then.