Earlier this summer Dominique McMullan set sail on the Wonder of the Seas, the biggest cruise ship in the world. From water slides to spa trips and theatre performances, she was pleasantly surprised by this skyscraper of the seas.

“Ship not boat” I remind myself for the 100th time while disembarking The Wonder of the Seas – the biggest cruise ship in the world, it’s maiden voyage having taken place in March 2022. Over the course of my two days on board this literal floating city, I made the blunder on multiple occasions. The difference?

Well, size. Without putting too fine a point on it, let me present you with some staggering numbers – 6,998 guests, 2,300 crew, 40 restaurants and bars, two theatres (one of which is a state of the art aqua theatre – more on that later), a pool deck featuring three waterslides, a jogging track, laser tag, sports courts, a spa, a casino, a wave machine, mini golf… I could go on. Gazing up at the 18 decks, my neck hurts. This is truly a skyscraper of the sea.

I’m not a “cruiser” (a term I learn that describes avid cruise goers, some of whom jump from ship to ship cruising around the world each year). In fact I have never been on a cruise before. I imagined an older clientele, buffets, cheesy crooners, sun burn and embarrassing, forced, poolside activities. Not really my cup of tea. But reader I was proved wrong. 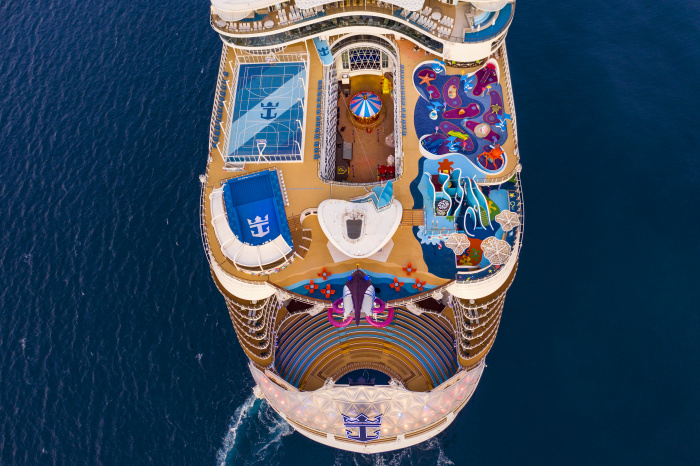 From the get go, the Wonder of the Seas makes life easy. Boarding is quick – an impressive feat considering the sheer volume of people and goods that need to get on board that day. I’m met with a welcome flute of champagne in one of the eight ‘neighbourhoods’, and find my way to my stateroom without a hitch.

I’m staying two nights in a Balcony Room, Interior and Sea View rooms are also available, as well as Suites for those looking for a little more luxury. My balcony room is surprisingly spacious and has everything I need for a comfortable stay. A seating area with a vanity table and large mirror leads to a king size bed from which I gaze out onto the balcony, overlooking the sea.

There is something quite magical about lying in bed and observing an endless sea view, especially once we set sail. The bathroom has a sizeable shower and all the little luxuries you might expect from a good hotel. As I head out to explore, my stateroom attendant Ricardo greets me by name and informs me that he is available over the course of my stay for anything I might need.

I head straight to the pool deck, a veritable wonderland of pools, jacuzzis, waterslides, lounging areas, bars and restaurants. Everyone is catered for here with a kids area, a solarium for those wanting a little shade, and an adult only area for those wanting a little peace. After a quick cocktail and a dip in a jacquzzi – that sits slightly off the side of the ship, making for a dramatic underfoot view – I head for the spa.

A free five minute shoulder massage in the lobby of the spa persuades me to pay for a full hot stone massage. Many of the amenities are free for guests, however treatments at the spa are not, and are reasonably costly. My hot stone massage costs E179 for 50 minutes, with an option to pay E209 for 75 minutes or E299 for 100 minutes. The spa is located just above the engine of the ship, and unfortunately my massage takes place just as the engines roar to life, however the noise becomes background after a few minutes and doesn’t ruin the experience. I head back to my room relaxed and ready to prepare for the evening’s activities.

Night time is when Wonder of the Seas really comes to life, with a staggering variety of restaurants, bars and entertainment available. We dine in the main dining room (which is included in every ticket), and I enjoy a pleasant meal of braised beef. Soon after we head to the Bonic Bar for cocktails – served personally crafted by robotic bartenders.

Yes you read that right. At this entirely human free bar, robotic arms shake and stir cocktails, made to order. By this point it is near midnight and my crisp white sheets are calling – an undisturbed night’s sleep is too tempting an offer for a mother of two to ignore. I sleep like a baby – with the curtains open and the moon reflecting on the sea right outside my window as we sail to our next destination. 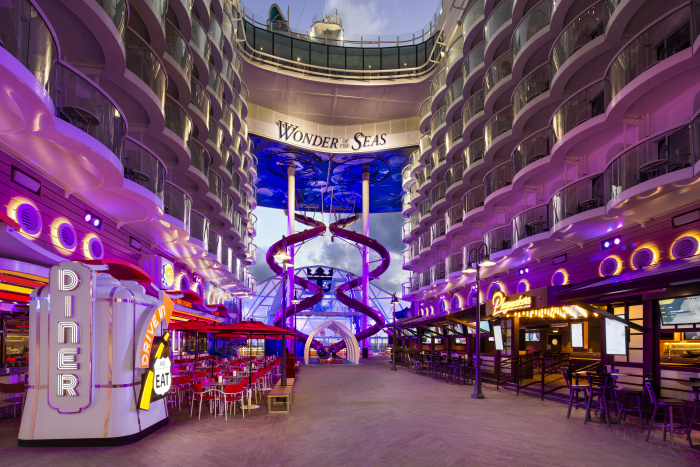 Day two starts with breakfast in the Windjammer, a buffet which covers every breakfast item you could possibly imagine, from eggs every which way, to pancakes, cold meats and even curries. I enjoy crispy bacon, scrambled eggs and hot coffee. The rest of the morning is spent learning about the environmental practices on board.

Cruise ships are quite obviously, not environmentally friendly in their nature, however admirable steps are being taken by Royal Caribbean (the the American cruise holding company) to attempt to neutralise their impact. The ship features shore power connectivity, which removes any emissions while connected at ports with these facilities, and 90% of the fresh water on board is produced by the ship itself. Since 2005 Royal Caribbean have reduced carbon emissions by 35%, and Royal Caribbean Group has committed to further reduce emissions by 25% by 2025 from 2019 levels.

I am child free on this trip, but it strikes me on multiple occasions that a cruise would be the perfect family holiday. It’s all inclusive and safe, with kids clubs and lots of entertainment for children available at all hours. I take a tour around the children and teens area and can immediately think of many young people I know that would love nothing more than to spend an afternoon here. The teens area is especially impressive, with video games, comfy areas, big screens, pool tables and a very cool non alcoholic bar to hang out at.

Next on the itinerary is a trip to the new opened Mason Jar, this is a speciality restaurant, so not included in the standard ticket package. This restaurant specialises in Southern comfort food – think buttermilk fried chicken, lobster and crawfish gumbo and crab beignets. It’s truly finger licking fare, perfect after a day in the sun. There is also an small stage to enjoy live music as you eat. I couldn’t pass sampling a few of the bourbon cocktails on offer and can testify that as well as packing a punch, they are utterly delicious.

A trip down a slide called The Ultimate Abyss might not be advised after so many delicious treats, but in the name of research I whizz down from deck eighteen to deck six, landing rather unflatteringly and giddy with adrenaline. I’m in for a penny at this stage so I head back up to the top deck and do a zip line across half the boat, watching state rooms fly by me left and right. Adventure seekers will not be disappointed on the Wonder of the Seas, but my dinner is now calling.

After a quick freshen up and a wander through Central Park Neighbourhood (which houses over 20,000 real plants) we have dinner in 150 Central Park, which describes itself as “elevated cuisine, featuring locally sourced ingredients harvested at the peak of their season”. Again, this is a ‘speciality’ restaurant, not included in the standard package, but which you can pay extra for. I have scallops and lobster thermidore, both of which impress as tasty, elegant and well crafted dishes – definitely worth the extra if you want to treat yourself to something special. 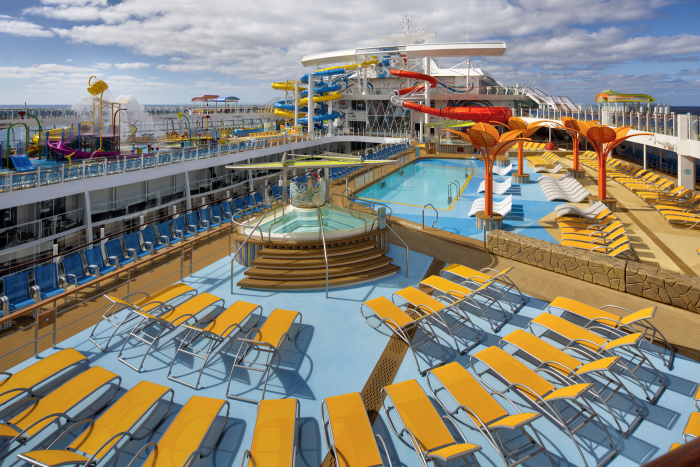 Next up is the InTENse Aqua Show in the Aqua theatre. The Aqua Theatre is located at the end of the ship, surrounding a small pool. I am blown away by the performance. Twenty performers dance, swim and dive (from a 16 metre diving board) in what can only be described as a Matrix style, gladiator, water show – with great tunes to boot. It’s impossible not to be awed. The cast are all women, and serious athletes, some of whom reached Olympic level. I get the impression that they are also all pretty bad ass, if I can use that term. I leave wowed and buzzed, and wander the length of the ship to my next show.

‘Voices’ takes place in the Royal Theatre and is a little tamer by contrast, but still very enjoyable. This all a cappella show mixes virtual and live performances in real time – it’s feel good entertainment and hard not to sing along. At this stage the crowds are heading to the night club, the silent disco or the karaoke bar to mark the end of an exceptional day at sea. After a delicious late night pizza slice, my bed calls once again.

So am I now a cruiser? No. But would I consider another cruise? Absolutely. A few things I noted as a first timer.

1. There is no feeling of claustrophobia, as I was worried there would be. In fact, oftentimes you would barely notice that you were on a ship at all. The outdoor and indoor decks are multiple and huge and the rooms are just that, roomy.

2. It does not cost as much as I thought it would. By keeping an eye on the website for last minute deals you can pick up some really great packages. Currently, seven nights sailing visiting Barcelona, Mallorca, Provence, Florence, Rome, Naples and back to Barcelona would cost you E824 for a balcony room such as mine.

3. There is truly something for everyone. From a person who simply wants to sit in the sun with a book; to a busy family needing a break; to thrill seekers who need lots and lots of activities; to late night party people – everyone is carted for here.

I’m already looking at dates for next year.

*Dominique McMullan was a guest of Royal Caribbean

Need some space? These homes will make you consider modular living