The insight into how and why Chris Watts killed his pregnant wife and two small children via a new Netflix documentary has catapulted the case back into the spotlight, writes Amanda Cassidy

Warning: Harrowing written contents from the documentary contained in this text

The quadruple murder has once again become the major topic of conversations both online and among viewers – as the world struggles to find any possible clue to how such a seemingly ‘normal’ family man could be capable of such brutality.

American Murder: The Family Next Door also includes rarely-seen text messages and letters between Watts and his wife Shanann as they argued over the affair she suspected he was having.

The bodycam footage of the officer called to the Watts’ home in Colorado one sunny August morning in 2018 gives viewers an insight into how Chris Watts acted as he arrived home from work to an empty house – his wife and two little girls have been missing for a few hours by now.

He “finds” his wife’s mobile phone and wedding ring and presents both to the officer – wondering out loud where they could possibly be. He seems distracted and jumpy as they go to a neighbour’s house to view security footage taken the night before outside the family home. In the footage, Watts is seen backing his truck towards his front door and loading something into it.

He explains anxiously that he usually puts heavy tools into the vehicle for his work. As Watts walks back outside, the neighbour whispers to the officer that “that guy ain’t acting right.”

Their mother’s lifeless body lay at their feet as they rode to their deaths.

The documentary is as compelling as it is heartbreaking. It is interspersed with Shanann as she charts her life via social media, recording videos of her daughters Bella and Celeste visiting their grandparents, singing about their hero daddy and playing in the waves together.

Their text exchanges are equally heartwrenching as Shanann struggles to understand why her husband has grown so distant.

The horror of what really happens slowly unfolds in the hour and a half long programme. And despite the case receiving huge media attention at the time, viewers are once again reminded of the callous way the lives of Chris Watts’s family are snuffed out so cruelly.

On August 13, 2018, Watts strangled his 15-week pregnant wife in their bed after an argument, detectives believe. Then he drove her body to a job site at the oil company where he worked, his daughters, Bella 4 and Celeste, 3 in the back seat of the car as he drove. Their mother’s lifeless body lay at their feet as he drove them to their deaths. 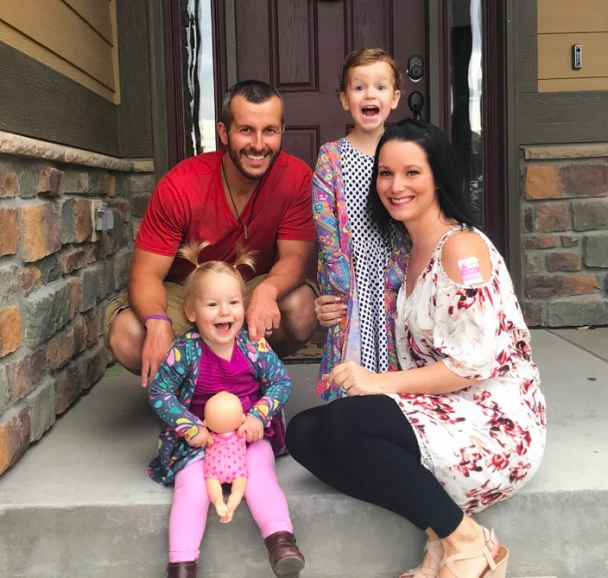 He disposed of his wife’s body in a shallow grave and then smothered his daughters – Bella, 4 and Celeste, 3. He later admits that he stuffed his daughters into the giant oil tankers close to his workplace.

Later, their oil-slicked bodies were removed by officers who still have flashbacks about the brutality of that day. Autopsy reports show that Bella fought for her life as her father covered her face with her blanket – she’d bitten her own tongue multiple times while she was being smothered.

Dave Baumhover, one of those present that day, now suffers from post-traumatic stress disorder. He says it can be triggered by the most innocent, the most innocuous of things: The sight of little girls. “It’s like when you’re a kid and you go on the wrong carnival ride and all you want to do is get off,” he told the Boston Post. “But you can’t. You have no choice until the ride shuts off.”

The reasons why Watts murdered his family remain vague, even now. But the theory detectives eventually presented to the court was that he simply wanted a new life with his girlfriend.

Chris Watts is now serving multiple life sentences for the murders without parole. Shanann’s family requested the death penalty not be considered in this case.

But as the family struggled to come to terms with the brutality of what happened, they faced a second tragedy. Relentless online trolling – an issue that was only mentioned in passing during the documentary.

Shanann Watts’ father, Frank Rzucek says the barrage of vile posts has prevented them from grieving. “I don’t want to draw more attention to the viral material that has been posted online, but I will say that our family, including Shanann and her children, our grandchildren, have been ridiculed, demeaned, slandered, mocked in the most vicious ways you can imagine.”

“It is cruel. It is heartless and families like ours should have the right to be safe, the right to mourn in peace.”

The images of innocent little girls floating lifelessly in dark oil tanks is hard to unimagine, their mother nearby, covered in clay

This documentary paints a picture of a marriage falling apart – while Shanann wants to fight to save their union oblivious that their lives were in danger. It also portrays how devastating violence can masquerade under the guise of an attractive, seemingly-devoted father – that bad sometimes looks wholesome and good.

The draw to such a sad story is because it is hard to look away when a picture-perfect scenario shape-shifts to reveal an ugly heartbreaking truth – a father who should protect at all costs, instead stealing lives, destroying futures. The images of innocent little girls floating lifelessly in dark oil tanks is hard to unimagine, their mother nearby, covered in clay. The second tiny heartbeat within her (a little boy they were going to call Nico) robbed of his chance of life.

It is believed that Watts is aware of the documentary and is “triggered” by its content. A source close to him told People Magazine that “he’s curious about [the documentary], but he hates even knowing that his texts are out there for the public to read. It brings back awful memories of 2018 for him. He can’t see it, and he’ll probably never see it. Yes, he feels shame but he knows he brought it on himself.”

American Murder: The Family Next Door is now streaming on Netflix

Why ‘having it all’ won’t make you happy