We had much bigger issues to deal with, so both Meghan and Harry slipped away without much furore and scrutiny. After the treatment they had received from both the public and the media it is the least they deserved.

Now they have given the world a glimpse at what their life following the break-up will look like. The couple moved to Los Angeles last month and are already putting their profiles to good use.

The moves also seem to hint at the long-term goals of the couple.

Over the last week, they have been volunteering with Project Angel Food, a non-profit organisation that cooks and delivers meals to those with serious illnesses who are at high risk during the pandemic.

Harry and Meghan have been particularly hands-on and helped deliver meals on Easter Sunday and offered their services once more on the following Wednesday.

Project Angel Food’s executive director Richard Ayoub told PEOPLE that the couple kept a low profile while working and that the organisation was “honoured” to have them on board.

Then on Tuesday, Meghan took part in her first public engagement since stepping back from royal life. On a video call over Zoom, the Duchess of Sussex spoke with the women from the Hubb Community Kitchen about a new campaign they had launched to help feed Londoners during the crisis.

The kitchen will be delivering 250 to 300 meals to families in London three times a week.

Meghan told the women during the call: “You all had it in you and what was so great is after that first day and then however many visits later, and going ‘yeah we’re just going to make a book’, and not realising, knowing and having a lot of faith in what you guys could bring to the table, and what you could inspire but obviously not knowing what a huge success it was going to be. That is just a testament to you, and what I love is it’s just inspired so many people.”

The Hubb Community Kitchen was one of Meghan’s first solo projects in 2018 when she visited the kitchen following the Grenfell Tower fire tragedy. 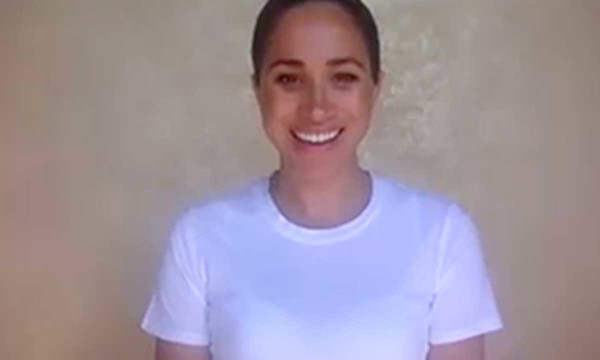 Both incidences in many ways show the path both Harry and Meghan are trying to forge for themselves. One that is less refined glamour with suits and headpieces and more day to day casual normality.

In the Zoom call, Meghan wears only a white t-shirt with her hair tied back and minimal make-up. Looking at clothing as a message may be a trivial pursuit, but fashion makes powerful statements. It could be highlighting the more ‘behind the scenes’ approach they will be taking to public life.

It seems their philanthropy will be much more hands-on, with the couple playing a bigger part in the organisations and issues they care about.

It’s also a hint that much of Meghan’s future endeavours will be humanitarian causes.

Meghan and Harry officially stepped down as senior royals on March 31 and no longer use their HRH titles.

Read more: Meghan Markle: ‘Continue to value and appreciate the women in your lives’