We Won’t Be Wearing “Barely Legal” Any Time Soon, Kylie

Virginity. Barely Legal. X-rated. These are just some of the new names of Kylie Cosmetics to add to the already controversial lineup of eyeshadow (“Spank Me”) and mascara (“G-spot”) and lipstick (“Exposed”). Yes, the internet is not happy with Kylie Jenner, again, because her latest product range sounds like something from Cruel Intentions rather than a tweenage’makeup line.

The announcement of the blusher line came last week and her 90+ million followers, it seemed, simultaneously?jumped for joy at the addition of five blushers in a range of pinky colours. That was the reaction, at least, until Kyle herself released the names of her latest addition on Snapchat, which was immediately followed by a wave of negative backlash.?Naturally, people are calling the brand out for promoting overtly sexualised products to young teens, and the company have yet to make any official comment. One Twitter user even went as far as saying?”Kylie Jenner named one of her blushes “barely legal” maybe just to remind everyone?” …*gulp* 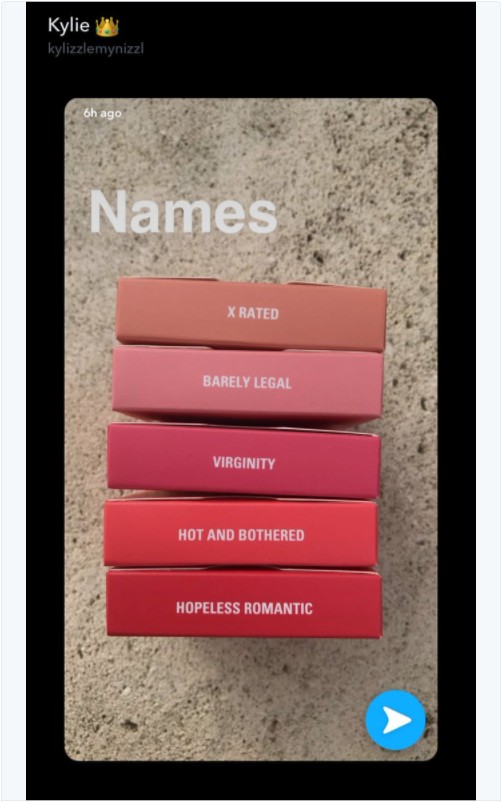 The name announcement on Snapchat

In her nineteen years (can you believe she’s that age?)?on earth, Kylie Jenner has already fronted a global makeup brand,?has acquired a following of over 89 million followers on Instagram, has been ranked in Time Magazine’s annual list of influential teens, and has already had a successful clothing line in Topshop along with sister Kendall. But with all of that responsibility comes frequent controversy, and sometimes we think’she may need reminding that wisdom comes with age.

So; is the move an innocent mistake by the savvy businesswomen? Or is she in the business of sex sells? We reckon Kylie knew exactly what she’s doing, but even so, we’re going to have to sit this one out. Our cheeks are just not ready to be “X-Rated”.