Thrill Seeker: 3 Places To Go On An Adventure Break

Can’t sit still on holidays? Get out of your comfort zone and swap the ?fly and flop? for one of these great adventure breaks right on your doorstep, writes ORLA NELIGAN.

Sheer cliffs, scenic bike rides, ancient sites, seaweed baths, coastal hikes and cosy pubs – just a taste of what’s on offer on Extreme Ireland’s Wild Atlantic Way tour that encompasses the 2,500km stretch of coastline from Cork to Donegal. The world’s newest coastal touring route has been described as the ?journey of a lifetime?, combining all the raw beauty of Ireland’s West Coast with its quaint villages, pubs and high-octane adventure. The tours run by Extreme Ireland are well paced, mixing adventure, history, culture, nature and plenty of downtime. Choose from six-, seven- or twelve-day tours that take you from Kenmare, around the Ring of Kerry, stopping for hikes around the Killarney lakes and a trip to the rugged wilderness of the Skellig Islands, recently immortalised in the latest Star Wars movie, where you can see the still-preserved 6th century monastic site on Skellig Michael. Swim with dolphins and taste the local whiskey in Dingle town before hitting the cliffs near Lahinch for some coasteering and surfing, rounding off with an awe-inspiring view from the ?Cliffs of Moher and refreshments in Doolin. No visit to Clare is complete without exploring the Burren, which is followed by a short hike to Kylemore Abbey, and you’ll even get a chance to shear a sheep at Killary Farm. Historical sites such as Slievemore on Achill Island feature on the trip before biking the greenway into Westport. If you’re still hanging in there on day ten, there’s SUP (stand-up paddling) in Sligo followed by seaweed baths in Strandhill. Your final destination is the Slieve League coast in Donegal, where beautiful beaches, soaring cliffs and towering sea stacks make a fitting end to an iconic journey. 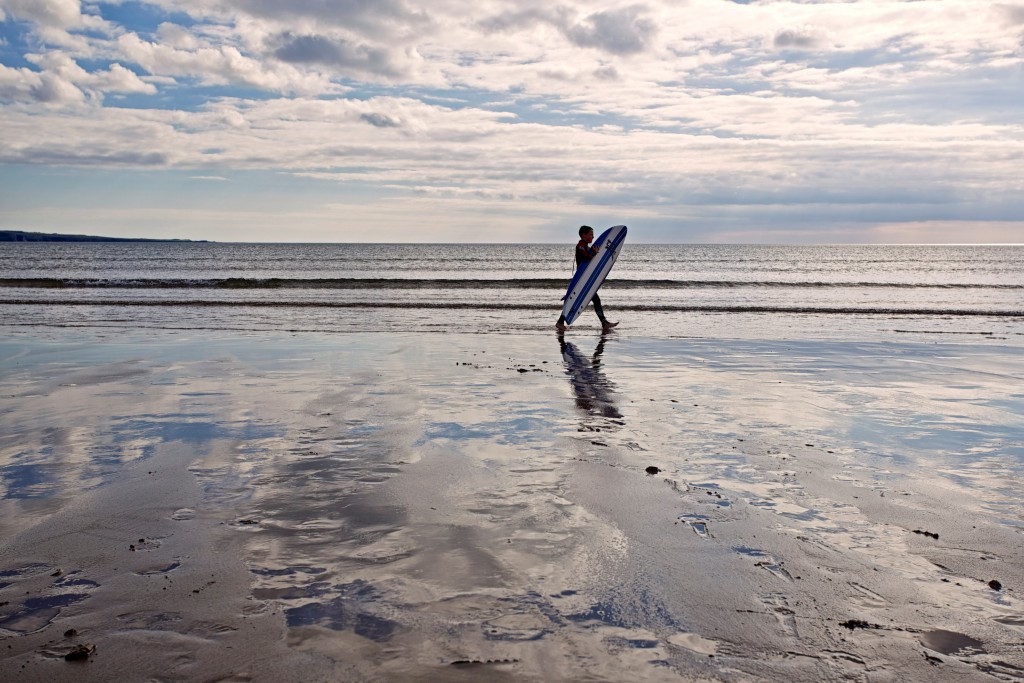 A bioluminescence paddle trip through the tranquil waters of Lough Hyne, Co Cork is the nearest thing you’ll get to floating in the stars. The tour takes off at dusk, giving you a chance to get your bearings before the moon and stars come out. Lough Hyne is Ireland’s first marine nature reserve, carved out during the last Ice Age, with only a narrow channel linking it to the sea, so the water stays a few degrees warmer than the surrounding ocean, inviting a whole host of unusual marine life to live there, including 72 different species of fish. ?I love the fact that you’re an island yourself when in a kayak, and there’s a certain peace you get when kayaking at night that you don’t get during the day, not to mention the beauty of our coast and the amazing wildlife you’see on the tour,? says owner Jim Kennedy, who runs Atlantic Sea Kayaking with his family. If the sight of your paddle being lit by a 1,000 tiny bioluminescent organisms isn’t enough, you can glimpse sea urchins, starfish, dolphins and the occasional inquisitive otter before exploring one of many sea caves. Jim and his family ensure a very special experience: Jim’s daughter Jesse is a musician and will often provide a musical interlude from a nearby pier; and his wife Maria grows all the organic produce for the midnight picnic that includes such local delights as crunchy kale salad with seaweed, rolled smoked salmon, Gubbeen cheese, grilled halloumi and platters of strawberries … It’s no wonder this adventure features on bucket lists halfway across the world.

We can blame Bear Grylls for the growing number of burgeoning survivalists who enjoy the idea of eating insects and drinking their own pee. If you’ve ever watched Grylls and thought, ?I can do that? (or fancy getting your chops around some fish eyeballs), then it’s time to test your bushcraft skills in the Wicklow Mountains courtesy of Kippure Adventure Centre. While certainly more hospitable than Grylls? survival locations, you’ll still be camping out under the stars and learning how to make a fire (not a Zip Firelighter in sight), build your own shelter for the night, collect and purify water, track, trap and snare animals, forage for food, navigate the outdoors, and a whole host of other skills. The two-day course is

run by military instructors from an army survival school that will put you through your paces and teach you everything you need to know about surviving the outdoors. ?It’s amazing what you can do with a roll of duct tape and a piece of string,? says Martin Dunn, operations manager at Kippure Estate. ?But we promise you won’t have to eat any worms … just skin a few rabbits.? There is alternative accommodation should the weather turn inhospitable, and soup and sandwiches on departure to ensure you don’t leave for the real world too hungry. ?A lot of people who do the course want to ‘skill up?,? notes Martin, ?but for the majority, it’s about connecting with the outdoors and spending some quiet time in nature.?