Leonard Cohen: The Man With The Golden Voice

Leonard Cohen does not disappoint. This is clear from the moment his be-hatted silhouette walks on to the stage. The mood of the crowd surges and soars in anticipation of the next three hours of what is pure gold – every time. Even though last night marked the fifth time he has played here in six years; there is no nonchalance – nothing is stale. All of it is heartfelt.

The first song, Repent, set the bar high and hearts higher, as the legend and his band carried on delivering and delivering, right past the three hour mark. What was really amazing was how he succeeded in making the giant space of the O2 into something that felt smaller- intimate even, such is his power to draw you right in.? There is no choice but to listen as soon as that sublime voice spills out of him. His potent mix of song, poetry and grace, cut through with mischievious wit is a powerful force. After Tower of Song, the audience exploded with what felt like pure glee and he asked, ?is this your idea of compassion toward the elderly?? The man may be 78, but elderly would certainly not be the word to describe him. 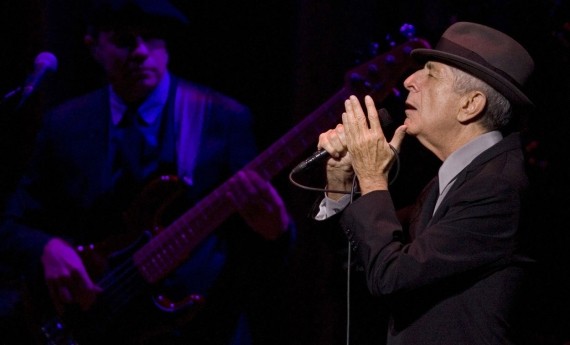 The set contained all the favourites; Chelsea Hotel, a sublime version of Come Healing, Everybody Knows, Bird on a Wire, First we take Manhattan, So Long? Marianne, with each track showcasing a stunningly tight arrangement. The Webb sisters? version of If it Be Your Will was haunting as was Sharon Robinson’s Alexandra Leaving – these women are great singers, and you can see Cohen’s utter appreciation of them and their talent. His gratitude is a pervading force throughout the show as he thanks each and every band and crew member by name. His humble bow to each of his on-stage compatriots is now a well-known ritual, but yet again; never stale, never contrived.

He took complete ownership of Hallelujah – it came from deep within him and poured forth as a great lesson to all cheap TV song contests; it’s his song – he alone knows how to sing it. Leave it to him.

Each time we thought he would wrap up the set, the man with the golden voice carried on before he eventually spoke to us again as ?friends?, he said, ?I never got to tell you how beautiful you are, may the blessings find you in your solitude? and he skipped off the stage.

Earlier in the night, after a particularly rapturous applause, he had asked (with a cheeky wink) ?are you humouring me??. No Lenny, we’re not, you are humouring us. ?Once again our souls were spoiled with a Tower of Song from a giant of a man and we loved it. See you again next year hopefully!