Horror cinema has become obsessed with portraying older women’s naked bodies as a source of fear and repulsion. This trope is based on and perpetuates society’s obsession with youth, beauty, submission and the devaluing of older women.

Recently, I had to do the smile. You know the one. Lips closed, doesn’t reach your eyes, more a forced muscle movement than an actual expression. The smile that says “I am fulfilling the bare minimum of what is required of my face in this moment, in order to placate you – but I am also letting you know that I am placating you.”

In fairness to the recipient of my dead-eyed smile, he was trying to be nice. He was filling out some forms for me and had to take my age. When I told him I was 31, he immediately responded “Sure you don’t look it!” And I did the smile.

I get it. It’s a well-intentioned, almost ubiquitous social nicety to tell a woman that she doesn’t look her age. It’s an easy compliment – and it drives me mad.

I don’t think looking my age is a bad thing, because I do not believe that my age, nor the very process of ageing itself, is something to be ashamed of. I don’t believe that women should have to hide the very basic fact that we have lived and survived as long as we have; I don’t think it’s a bad thing to look like, yes, we did indeed carry on breathing after age 26. To be told that I “don’t look my age” is to tell me that because I’m over 30, my age is already a problem, and I should want to hide it. It’s a compliment that comes loaded with a threat: one day, you will look your age. And that will be terrible.

I never bought into this hatred of women ageing. I was, in fact, always enamoured with the idea of being an older, eccentric woman with more wisdom and fewer f*cks to give. This love of older, powerful women fuelled my early love of fairytales and ghost stories; tales where witches, crones and hags eschewed limiting conventions and sexist societies to live by their own rules.

I loved sassy and industrious Ursula more than I loved voice-surrendering Ariel. I was fascinated by the idea of banshees who would not silence their emotion for anyone. Iwas thrilled by descriptions of Roald Dahl’s witches removing their attractive masks, confining outfits, and polite facades in private to revel in their unapologetic unpretty unruliness. 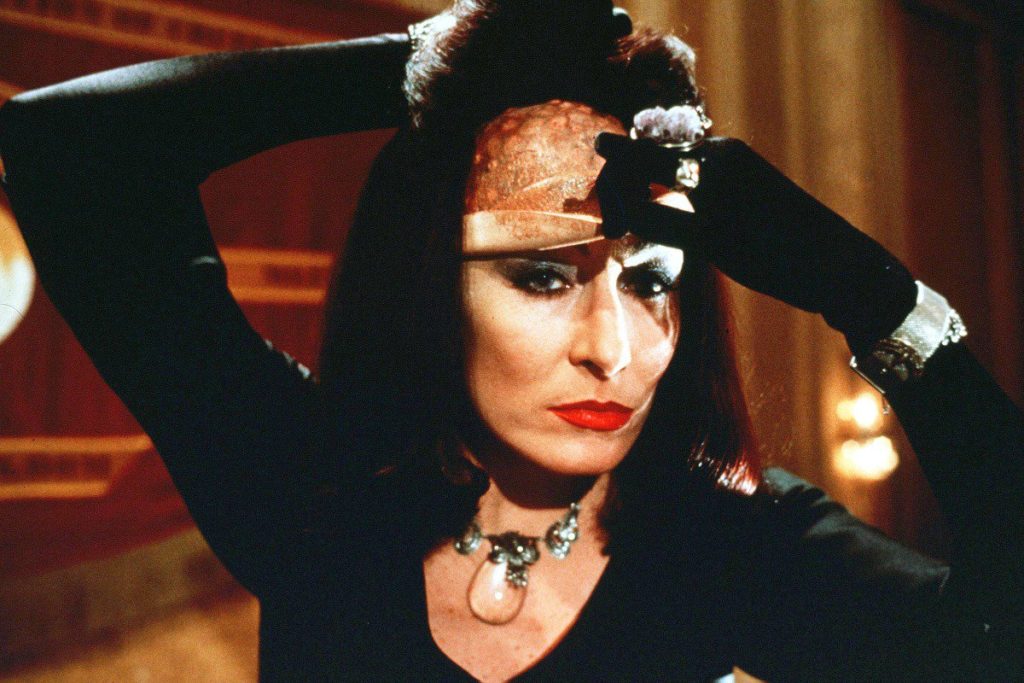 Anjelica Huston in The Witches

As a young girl interested in older, powerful female characters, and now as a film critic, I’ve also always loved horror movies. I’ve studied the genre’s complex and evolving relationship with gender; embraced the possibilities offered by stories of female survivors, female villains, female monsters. I believe that a genre that explicitly explores fear can be particularly important for women who live in a world that constantly endangers them, and appreciate modern horror’s nuanced portrayals of female experiences.

However, despite this feminist evolution of horror cinema, one trope has not only persevered, but seems to be growing in popularity: the portrayal of the ageing female body as something disgusting, something terrifying, something monstrous.

Even in a genre dominated by serial killers, evil spirits, demons and monsters, we still believe that nothing is quite as terrifying as the naked body of an older woman.

The naked bodies of older women have been weaponised to try terrify and unsettle audiences in a bizarre amount of modern horror films. A naked older woman scuttles through a kitchen in IT2, and this is supposed to be terrifying. A naked older woman appears among a group of naked younger women in Midsommar’s cult-based sex scenes, to show viewers that this situation is weird and not sexy.

“Women’s bodies and behaviour are presented as inherently hideous and unsettling; their untaut skin revolting, their unperky breasts horrifying, their deemed undesirability rendering them monstrous.”

In The Visit, a naked older woman is discovered walking the hallways of her house at night, causing a young boy to recoil in horror at the sight, exclaiming “Jesus, I’m blind”. 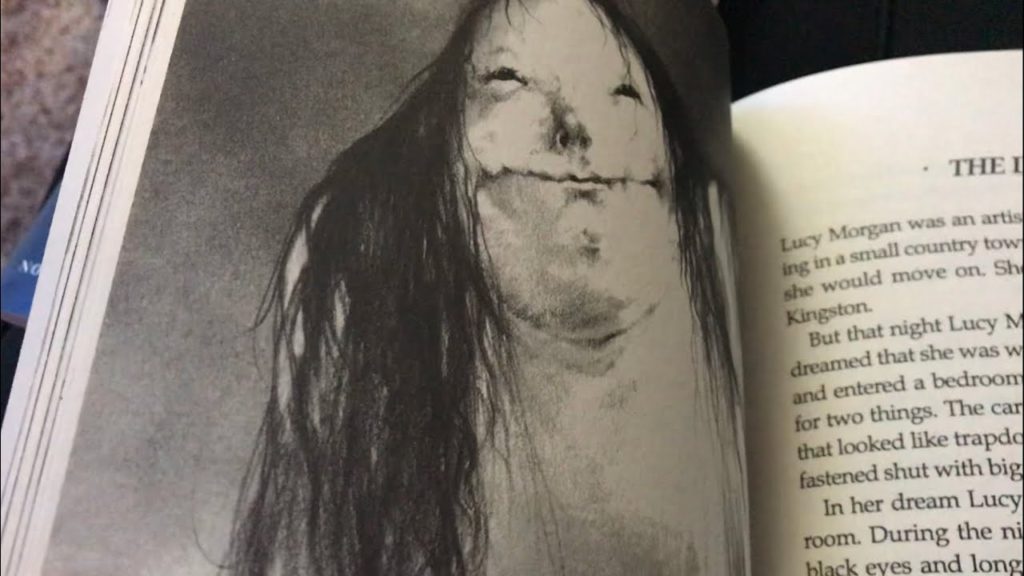 Two monsters in Scary Stories To Tell In The Dark are coded as naked older women; the Pale Lady (pictured above), all stringy hair, sickly grey skin and a large, lumpy form, and the Toeless Corpse, all sinewy arms, sagging skin, long hair and shredded clothes that threaten to disintegrate.

In all of these instances, these women’s bodies and behaviour are presented as inherently hideous and unsettling; their untaut skin revolting, their unperky breasts horrifying, their deemed undesirability rendering them monstrous.

The single most natural fact of their ageing is, onscreen, presented as unnatural. Older women should be unseen, and yet here these women are, unapologetic in their naked visibility – and isn’t it terrifying?

Age and the cinematic gaze

The image of these older women’s naked bodies contrast with the image of female nudity we’re used to seeing onscreen; particularly in horror films. In horror films, when women’s bodies are visibly, they are either objects of sexual desire or victims of violence.

We’ve become accustomed to seeing young, beautiful women being lusted after or tortured; either way, their bodies are viewed with a male gaze, seen to exist to fulfil the men’s desires. Their bodies always exist in relation to someone else: they are running from someone, being watched by someone, being killed by someone – and their nudity also serves someone else, usually their lover, their killer, the audience – or all three.

But naked older women in horror movies are usually presented in isolation and in control. They are alone in the dark; they are moving towards a goal we aren’t clear of; they are in control and existing for themselves, not for us – and this is also terrifying.

Directors using the image of naked older women are not just trying to shock audiences by portraying older women’s bodies as shocking, but by portraying their act of being naked as somehow dangerously subversive – these women don’t care that no-one wants to see them. This difference between the objectifying gaze upon the bodies of beautiful young victims and the disgusted gaze upon older insidious figures in horror movies echoes critic John Berger’s distinction between nudity and nakedness: “To be nude is to be seen naked by others and yet not recognised for oneself… To be naked is to be oneself.” Naked older women are deemed terrifying because they are existing for themselves, not for us.

This pervasive trope associates being a woman and ageing not just with being repulsive, but with being evil. There’s a moral judgement being passed upon women who dare to age, that they are not just less desirable, but less good; in every way, less valuable to and less wanted by society. And unfortunately, in this way, the trope is playing on and perpetuating existing ageism and sexism in society.

Women are systematically devalued as they age, and much of this devaluing is based on beauty ideals that are obsessed with youth. As Susan Sontag wrote, “standards of physical attractiveness differ for men and women…those for men are less stringent and less connected to youth, whereas for women any sign of advancing age is an indication of diminished attractiveness.”

This devaluation of older women is seen in the very industry that these horror films are created in. A study conducted by the Pudding in 2016 showed that women still only get 28.2% of all speaking roles in cinema, and the majority of those speaking parts are given to women deemed to be in the peak of their attractive years, that is 31 and under. Only 23% of all women’s speaking roles are given to women over the age of 42, with less than 3% of speaking roles going to women over 65. An analysis of ageism in Hollywood in Time magazine concluded that this onscreen ageism is in fact, getting worse, rather than better, saying “Women today who are the age of 60 are seeing the number of roles they are cast in decline faster than their older peers once did”.

When older women are rendered invisible and irrelevant through a lack of representation of their words, thoughts and experiences, and rendered hideous, undesirable and terrifying in the horror-based representation of their bodies, cinema is perpetuating the pervasive cultural idea that only young women can be attractive, and that only young, attractive women are valuable.

We need to leave this tired trope behind, and start working against the sexism, ageism, and limiting beauty standards that has led our culture to repeatedly portray the women’s ageing bodies as a source of repulsion. If for no other reason that I’m already over 30, and have no problem using my ancient hag status as an excuse to haunt every sexist director until the end of my monstrously wrinkly days.