The @Ireland account has promoted debate since its inception in 2012, however its latest curator American graphic designer, Maria Oswalt has sparked an inferno-like debate on Irish twitter in the last 24 hours, Sophie White explores

@Ireland is a Twitter account manned by a different person every week. For the most part, the appointed tweeters are diverse, both Irish and international and politically and socially engaged. Curators can apply themselves or are often nominated by others. Account moderator, Darragh Doyle vets prospective tweeters’ applications which must include a personal bio and a paragraph (140 characters natch) explaining why they would make a good curator. The account custodian, Irish Central.ie has stipulated rules for prospective curators, though no mention has been made in the rules around expressing political views on the account during the tenure. And here is where @Ireland has waded into murky territory in the last 24hours when it came to light that the latest person to man the account is an Alabama woman who identifies as anti-choice and stated that her main purpose in coming to Ireland was to volunteer for the Life institute.

“Maria applied for the @ireland account in the same way as everyone else,” Doyle told IMAGE.ie. “She applied on the basis of being in Ireland for the first time, visiting her boyfriend in Trinity College, and eager to meet new people and use the account to discuss the usual things people tweet about – food recommendations, TV, Sonder, Valentine’s Day and so on. She was not asked about her beliefs on abortion before she took the account – no curator is. I find out about people’s beliefs when they tweet about them.”

“The @ireland account is not a twitter account that is representative of Ireland – rather, it’s representative of the people who apply for it. The majority of curators on the account choose to share that they are pro-choice during their weeks. It is obviously very important to them.”

“Members of @Repeal_Shield contacted me yesterday asking if I knew that she had done some work with a pro-life group.” 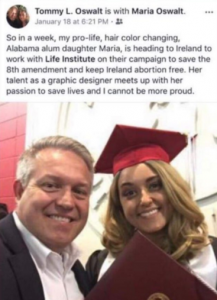 When Maria took over @Ireland, her first few messages were whimsical and lighthearted before a series of tweets in which she described her plans to become involved in local issues during her stay here. She appeared to be responding to a swell of commentary regarding her agenda in being in the country during what is clearly a highly charged and emotional time for its citizens.

Okay okay, I feel like I have to address this now because people are starting to even question why I’m here in Ireland & why I’m on this account.

Yes, I’m pro-life. Yes, I was hoping to volunteer during my time here.

From looking at Maria’s twitter activity since taking over, it doesn’t seem likely that she’d planned to use the @Ireland account as a mouth piece however the debate has now raged with pro and anti-choicers alike weighing in on the decision to undertake political activity, however temporary that may be, in a country that is not your own.

The @Ireland account has always endeavored to provide a different perspective and to encourage healthy, measured debate. Whether we are capable of this with regard the 8th amendment, however, is hard to say and Maria’s ‘campaigner tourism’ has been met with a lot of anger on Twitter.

I don’t agree – I have no respect for anyone coming to this country with little to no knowledge of the complexity of the issue here to bolster sides and use ireland as an example for their arguements in their own country, it’s disgraceful

Why did you go to a foreign country with the intention of supporting a law that can imprison its inhabitants for 14 years for taking an abortion pill? Do you have any idea of the actual reality of what’s happening in Ireland?

Others took pains to be measured in their response  and even offered their own experiences with the maternity services to illustrate to Maria the impact the 8th amendment has had on Irish women.

Very happy for you to be here and for you to be @ireland for the week Maria. However it’s a bit disconcerting to find that your primary long term purpose here is to interfere in a campaign to keep a harmful ban on abortion that will never affect you personally in any way.

I have friends and family who have been directly harmed by the 8th. My own wanted pregnancy almost ended in a coerced, unnecessary C-section because of the 8th. Every pregnancy is affected by the 8th. Forgive us, but you are a tourist, it’s not your life or health at risk.

While many disagree with Maria’s stance on abortion, really the most baffling aspect of the story is her desire to influence a referendum that simply has nothing to do with her. There have always been close political ties between Ireland and America, but the idea that the long arm of a US-based anti-abortion lobby has extended to placing volunteers in Ireland during this fractious time is quite unnerving. However, perhaps it speaks to a new mood of globalised politics, the fallout from the first year of the Trump administration, for example, was felt nearly as keenly here as it was in the US. Modes of communication have made physical distance an almost arbitrary factor and American political developments are given nearly equal weight in the Irish media, such is the knock on impact these decisions can have in the national sphere.

If Maria is indeed backed by a larger American organisation (an assertion some have made) then her influence could extend further than a single person distributing leaflets and may suggest murkier involvement from international groups.

To date, American dollars have funded both sides of the abortion campaign in Ireland. In 2016, it was revealed that American billionaire George Soros had provided funding to Amnesty International Ireland, the Abortion Rights Campaign and the Irish Family Planning Association. At the time, a Pro Life Campaign spokesperson, Cora Sherlock told the Irish Independent:

“These revelations are extremely disturbing… The fact that an outside body is talking about funding and coordinating groups in Ireland to dismantle protection for the unborn child represents a gross interference and is an attack on democracy.”

Of course, the anti-choice side have not been without funding from American groups themselves. In 2013 The Atlantic delved into the American funding for the Irish Anti-Choice Campaign:

“American abortion opponents have given hundreds of thousands of dollars over the years to the Irish pro-life lobby, according to Joseph Scheidler, spokesman for the U.S.-based Pro-Life Action League… Scheidler singled out the Irish pro-life group Youth Defence as one of the main recipients of funds from the U.S. because ‘They need the money for publicity. Abortion is about conversion and it’s very hard to convert people in masses, and that is why people like Youth Defence go out into the street.'”

The ire sparked by an American tourist wading into an Irish constitutional debate is unsurprising. It speaks to the insecurity and deep suspicions felt by people on both sides of this debate. As one Irish tweeter outlined in an informative thread on the subject, the seemingly underhand actions of Maria feel like another deception on the part of the Anti-Choice campaign who in the past have used questionable statistics and images many find upsetting to further their cause.

Some thoughts on the current minor controversy surrounding the #ireland account. #repealthe8th

Doyle clarified that currently there is no plan to remove Maria from the account.

“As Maria has already tweeted and confirmed to me in writing, she does not have the account on behalf of, requested by or to campaign for the Life Institute or any pro-life group. She had no intentions of tweeting about abortion from the account. She has not contravened any rules or guidelines around the account.”

“If I had known about Maria’s affiliations, past actions or initial reasons for coming to Ireland, the conversations around the @ireland account would have been very different. If I had taken the time to search or ask for more details, a lot of this might have been avoided. For my part in this, I can only apologise and try to do better in future. It is never my intention to censor someone because of their beliefs but in a time of fake news, fauxtrage, online dramas and especially in an emotionally challenging, important, divisive debate around abortion, it’s always better people are upfront and straight forward about their intentions and affiliations,” says Doyle.

“The @ireland account continues to welcome applications from people of all beliefs and backgrounds. At the moment I’m working on how to frame future requests from people hoping to use the account to campaign or tweet on either side of the abortion debate. Any suggestions, ideas or feedback is welcome to me at @ireland or at [email protected].”

Photo by Mikayla Mallek on Unsplash