On The Verge: Roisin Agnew On The Nature Of Risk-Taking

Are women really averse to risk, or is that just an old-fashioned myth? Our very own resident risk-taker ROISIN AGNEW explores a topic close to her heart.

A few months back, I was asked to talk at a girls’ school about myself and what I guess now constitute my life choices and pseudo career. It was Alexandra College, where my grandmother went, a private girls’ school that I remembered as the place invoked as my potential punishment if I didn’t stop causing trouble as a teenager – there would be no boys, I would have to wear a red tracksuit-like uniform, and I would be a three-hour flight away from my friends and family in Rome. The threat proved highly effective, and I cleaned up my act for a few weeks every time and never ended up there. So upon being invited to address Alex’s students (and replying that I thought they’d got the wrong person and were actually looking for Roisin Ingle), I was suitably chuffed and spent days thinking of a ‘lesson’ that might be useful to ‘impart’ without feeling more fraudulent than I already did. Eventually, I settled on risk-taking.

For the most part, we think of risk as something belonging to the world of tech start-ups, who’ve created much of the vocabulary and imagery that surrounds it. A Google Images search result for risk-taking will throw up several variations of stock photos of men in suits walking tightropes at terrifying heights. The idea is that there’s a great monetary price to be paid were their risk not to pay off, ergo their brains would be splattered across the pavement below. Risk in the start-up world is always related to productivity and profit. But unlike Google Images’ prescriptive definition of what risk-taking looks like, society’s idea of risk is more nuanced and extends far beyond the tech start-up domain whilst retaining its chipper exterior. More importantly still, it isn’t measured necessarily by the terrifying height from which the risk-taker might fall.

Quitting a job, moving country, starting a new business, starting a new career, returning to college, getting a bold haircut, travelling for extended periods of time – these all constitute everyday life risks that we celebrate and that I’ve always personally liked or received affirmation for myself. But we don’t measure them or approve of them in relation to what was at stake or what had that person to lose; rather, we think of these things as having intrinsic value. The idea started to obsess me. Are we fetishising risk-taking without taking into account the role played by circumstances and class? Does gender play a role in risk-taking? Should it still be celebrated then? And the answer to all these questions seems to me to be yes. 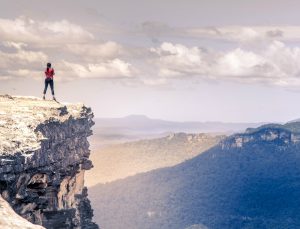 I took to Twitter to feel people out. “Do you think risk-taking is open to all or a privilege?” The speed at which I received responses and private messages indicated that perhaps this question was not just gripping my thoughts, but other people’s as well. “The confidence to take potentially life-changing risks comes from a position of privilege,” was one response. “It’s open to all, but those with privilege will find it much easier. It’s also more celebrated in privileged society,” was another. The sense was that risk-taking is open to all, but done mostly by those who walk the lowest tightrope with little to no chance of a splattered end. The idea depressed me. It suggested that my responders, as much as the imagined people they were talking about, felt trapped by their circumstances and unable to take risks and perhaps pursue things they wanted. And furthermore, people seemed to think women suffered from this more.

There’s an assumption that women don’t take as many risks as men, that the combination of nature and nurture have made them risk-averse in favour of stability. Thankfully, a recent book proves this is not the case at all. In The Art of Risk: The New Science of Courage, Caution, and Chance (National Geographic), Kayt Sukel looks at the preconceptions we have about women taking risks. In it, she addresses the fact that our idea of women as playing things safe is informed by the fact that for a long time, risk was not open to women, whilst it was celebrated as a sign of virility and masculinity among men. Today’s research is challenging the idea that men are risk-takers and women are those ‘better angels’. “Study after study shows that there is more variance within one sex than between the two,”  Sukel told Forbes. “We have a lot of biases – biases that are not evidence-based. More often than not, it’s not that men are smarter or better risk-takers than women. Just that they often have more opportunity to engage in risk-taking.”

Deciding to talk about risk to the girls in Alexandra College came from the idea that they were privileged and they were young women, and so risk was something no one was going to be encouraging them to take. I mined my own experience, acknowledging my own privilege in that I could go home and live with my parents if worst came to worst, but also acknowledging that
I had taken risks when I had alot to lose. I quit several well-paid jobs with no back-up plan and no financial stability, set up my small magazine while on the dole and with no money whatsoever and through crowdfunding. I left Dublin with no plan nor savings. I’m in the process of moving into screenwriting. My parents can’t bankroll me. What made a fundamental difference to me was the encouragement from peers and teachers at important stages in my life who assured me that things would be ok. They perhaps fostered a false sense in me that everything would be alright. I wanted to see if in my mumbled and sweaty-palmed, fraudulent way, I could foster that sense of security and ability to take risk in any of the young girls sitting in front of me.

Privilege and gender will always play a role in how easily we engage in taking risks, but neither should be allowed to have the last word. Ideally, it should be the stories we tell ourselves about who we are and what might happen, the culture we create around risk, particularly for young women, that will define how and when we take risks. So as summer approaches, and I’m still in my fraudulent role of someone who gets to give school addresses, I’d encourage everyone to make it a summer rich with risk.