Snaps To That: Investigating The Sway Of Snapchat

Did you know that 70 per cent of Snapchat users are women? SOPHIE WHITE investigates the appeal of the hottest social network and quickly finds herself falling down the rabbit hole.

?I?don’t get it.? This is me in 2011 talking to my techy friend about Spotify. ?You don’t download any of the music? It’s just on the internet?? I’m confused. I’m also finally beginning to understand my parents? ambivalence towards the MP3. As I began to amass all my music in digital form on my computer years before, my father could not comprehend it. ?But I don’t get it. You don’t own any albums anymore?? He believed my computer to be in some way impermanent in a way that a lifetime of LPs, cassettes and CDs – tangibles, basically – were not.

Back to 2011 and the explosion of Spotify, and I’m finally getting it – the very nature of permanence and ownership has been altered. We don’t need to own these things any longer; to hoard music, films, books, photographs, memories and information. It’s all on there. In that chasm-like dimension: the internet. Elsewhere in 2011, thinkers who were light years ahead of me were conceiving an idea for a new social media platform that would change an entire generation’s attitude to capturing the world around them: Snapchat. Growing up in the 1980s and early 90s, documenting our lives was important, and it was precious because the camera roll was finite.

There was anticipation in the process, a week’s wait to pore over the red-eyed, filterless innocence on display. Now our obsessive self-documentation is instantaneous, and as such it is disposable. And here’s where Snapchat comes in. Initially released in 2011 by then students of Stanford University, Evan Spiegel, now Snapchat CEO (just 21 at the time of launch), and Bobby Murphy, the company’s chief technical officer, the app sends video, image and text messages instantly, only to have them disappear seconds after they are opened.

?But the message disappears? I don’t get it.? It’s 2016, and I am considered a late-adopter of the app that is responsible for sending an estimated six billion video and photo messages a day worldwide. In my defence, I’m in my thirties, considerably older than the average Snapper, supposedly aged between 13 and 23; although, as I am about to find out, this is changing radically with each passing month. Not only is the app growing in usership – estimated at 200 million last year – its reach is moving well beyond the original teenage demographic. Media professionals and big name brands are enthusiastically taking up the ephemeral message sharing. New dimensions to the app launched in the last year include corporate channels with publishers like Vice, Comedy Central, BuzzFeed and Sky News producing highspec sponsored channels under the Discover wing of the app, ?where the experience is close to that of a multimedia magazine. The cost of these sponsored channels is apparently huge, but with returns in traffic that are undeniably valuable. BuzzFeed maintains that Snapchat views make up nearly a quarter of the company’s total traffic, while the Cosmopolitan channel generates an estimated 19 million views per month.

So how does Snapchat work? It’s a social media platform that sends content in two distinct ways: 1) You can send messages directly to other users, and 2) You can send content publicly to appear on your ‘story?, like your timeline on Facebook. You receive messages from other users either directly into your ?inbox? (as we’ll call it) or with updates in your ?feed?, where you can view the ‘stories? of other users. 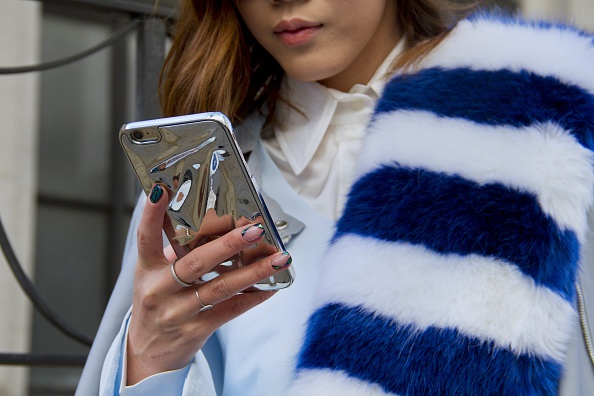 Confused? Try using the damn thing. Internet mythology posits that the app is deliberately user-hostile to alienate older would-be users; after all, nothing ruins a hot new app’s appeal like receiving a friend request from your mother.

Creative director of youth communications agency Thinkhouse, Dave Byrne hasn’t talked his mother through Snapchat just yet. ?She’s mad into Facebook ?and Instagram, but I just know I’ll show her Snapchat and then there’ll be an update that’ll throw everything!? Byrne joined three years ago. ?Now I’ve got my head around it, I think it’s probably the most exciting platform around. It’s stuff you can’t do with other platforms. You’re quite limited with Twitter. Instagram is good, but it’s more premium – all those lovely shots. With Snapchat, you can be a little bolder, because it disappears after 24 hours.? Although, content can be downloaded by the creator for later use. ?We’ve coined this phrase at Thinkhouse – the social underground and the social overground,? Byrne continues. ?Basically, the trend with the young audience is that on platforms like Facebook and Instagram, they put forward a particular image of themselves. It’s heavily filtered – it’s the photos from nights out where they look the best. But with the social underground, with the likes of Snapchat and WhatsApp, they’re being a lot more real.? I seek out some of the reported top 50 Irish people to follow on Snapchat to embark on what I decide to dub ?the rabbit hole?. I’m told that if I don’t know James Kavanagh, I don’t ‘deserve to be on Snapchat?.

Feeling sufficiently chastened, I immediately follow Kavanagh and stumble upon him in bed, severely hung-over. As promised, Kavanagh severely hungover is pretty entertaining, and I live through his morning for quite a while before remembering I have my own living to do. I spend the next few days in and out of the rabbit hole. My husband starts snapping videos of me watching Snaps to his friends on Snapchat, which is pretty meta, but I see the point he’s making. I lie slumped on the couch as the lives of others wash over me. For the most part, it is like an exceptionally dull reality TV show, and yet there I am engrossed. I suspect the attraction is that with Snapchat, there are no highs or lows – this is boring, but also quite comforting – a bit like being on a mood stabiliser.

Dave Byrne makes Snapchat sound vital and invigorating, with limitless potential. What I’m seeing is a lot of Kylie Jenner driving her car listening to rap music, and beauty bloggers opening freebies. I’m trying to tap into my peers, but the oldest person I can find on Snapchat isfortysomething, and she’s a media professional who plugs a lot of products. The fitness, fashion and beauty spheres are massive on platforms like Snapchat and Instagram; as Byrne explains, they’re hugely visual. ?There are thousands of these people in Ireland. It’s not boring, but there is a lot of noise. Having said that, there’s a huge audience. Every brand wants to be on the platform that is the most exciting.?

I call on the help of a couple of bonafide teens to show me their Snapchats. It’s not easy, as they don’t respond to my texts, only Facebook messages. Sophie and Dara took up Snapchat in fourth?year. I ask Dara to show me his story feed, but as I scroll down the usernames, he tellingly says: ?I don’t bother watching them, really; they’re all pretty boring.?

For the most part, it is like an exceptionally dull reality TV show, and yet there I am engrossed. I suspect the attraction is that with Snapchat, there are no highs or lows – this is boring, but also quite comforting – a bit like being on a mood stabiliser.

Snapchat personalities like James Kavanagh have garnered viewership in the tens of thousands. A recent Snap story of Kavanagh interviewing his nephew, who has autism, was covered by Irish media outlets as well as The Huffington Post?and Bustle. I ask my teen sources whether they see Snapchat as a potential career route. Dara laughs: ?For us, media management is just our everyday.? I’m enjoying these two. Their youth makes me ask questions in old-timey speak. ?How does the courting play out?? I’m told it’s 70 per cent groundwork on social media and 30 face to face. ?Asking for someone’s Snapchat is like asking for their number,? Dara explains. ?Dick pics are the most annoying because they’re constant,? Sophie adds. By now, the sixtysomething gent at the next table is sitting quite still, hanging on our every word. Sophie deals with these relentless photos by screenshoting them – while the message disappears, she’ll have a copy of it on her phone and the sender is alerted that the message was screengrabbed, and hopefully deterred.

I wonder whether these photos ever backfire. I’m assured it’s all a joke and that no one would send a nude snap to anyone they legitimately wanted to date. So no nude selfies? ?Well, there’s the ?after sex? selfie,? Dara declares. At this point, our neighbour gets up, and thanks us for an enlightening afternoon. I ask to see some of their old Snaps, which are mainly intoxicated people on nights out. ?On Facebook, you’ll monitor ?these are the things you don’t want your parents to see,? Sophie explains. ?I think Snapchat is increasing in users, but decreasing in usage – the buzz around it is gone,? says Kavanagh. ?It’s more limiting compared to Facebook.? None of this has really answered my burning question: Do we all need to get on Snapchat ASAP? As Byrne says, there’s a lot of noise, but it’s not a place for hiding. People who are popular are those with real wit and endearing personalities.

On Instagram, one can essentially curate a personality using internet memes and good filters. Snapchat is where, arguably, the real cream can rise to the top. ?When you meet some Instagram stars in real life, that’s not who they are,? says Byrne. ?They’re essentially living a lie online. Whereas with Snap, it’s hard to let people into your life 24/7 without being you . So I feel the people who are popular on Snap are like that in real life. People are falling in love with them, as opposed to a fake version of them.?

It’s this aspect that makes me feel optimistic about the app’s future. I’m hopeful that the rise of Snap is signalling an end to the obsessive curating, filtering and perfectionism of other social media. If our appetite for sharing our lives and consuming those of others will not be sated, then at least we’re cutting the crap. As for the ephemeral nature of the

Snap message, I’ve come to terms with it. The sheer volume of information washing over us now somehow renders all information that bit more disposable. Snapchat allows us to let go of that anxiety about preserving memories and capturing our every moment.