Roz Purcell on being dairy-free and embracing stretch marks

Roz Purcell is a powerhouse.

From her website Natural Born Feeder to cookbooks and TV shows, she is one busy human; yet she somehow manages to take it in her stride. I sat down to talk with Roz about her latest role; brand ambassador for Innocent’s new dairy-free range.

“I’ve always been a fan of dairy-free ranges,” Roz says, “and I love the taste of these.”

Roz’s website Natural Born Feeder has quickly become a haven for her followers – especially those who are trying to make healthy changes to their lifestyle.

Roz’s approach is positive. There is no such thing as depriving yourself; no drastic cuts to calorie intake. It’s about nourishment and better choices, so what advice would she give to someone who is trying to embark on that journey?

“I think everyone in January has this overwhelming feeling they need to change, but I take a different approach. It’s okay if you want to change some habits, but the important thing is to do it slowly.”

She believes going ‘cold turkey’ doesn’t work, but that setting goals for yourself does. “If you make a list of the end-goals you would like to achieve by the end of the year, and then break it down into small sustainable things that you can change over time, you will actually keep it up. That’s the only way I’ve ever changed my habits.” 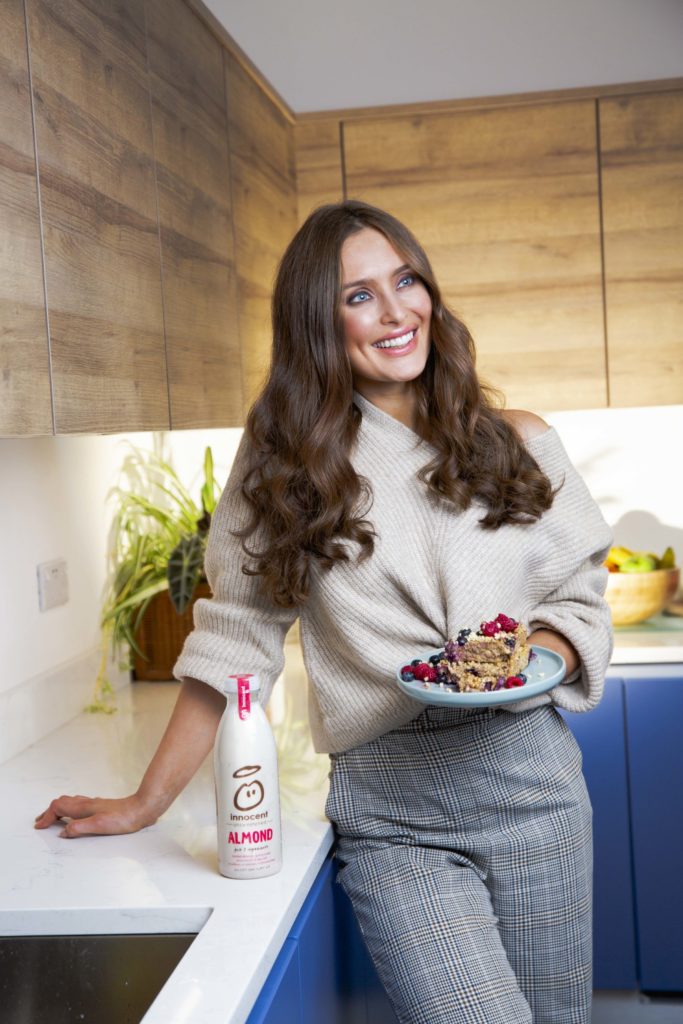 We’re all human, and we’re bound to overindulge from time to time. Sometimes, this can leave us harbouring feelings of guilt and shame, but Roz is adamant this form of self-punishment does more harm than good. “I don’t punish myself, I don’t feel guilty about it. I just go back to normal. I know it’s quite hard but it’s about being mindful, and a lot of the time it’s just habit.”

A few weeks ago, Roz posted a photo on Instagram showing an honest depiction of her stretch marks. It was personal, raw, touching and important all at once.

Being healthy in both body and mind is one thing, but accepting and loving that body and mind for what it is, is another thing entirely. It was freeing to see a female in the public eye using her platform to portray something real; something that is relatable instead of unattainable.

Roz said she was nervous posting the image. “I never really overthink things but for me, it was the first time I actually got quite nervous. I had never shown that side of me. I was sitting in my bikini and I thought to myself, three or four years ago I wouldn’t have sat in a bikini in front of my friends because I would have been so self-conscious.”

Related: ‘I used to love my body, but then I got sick’

“When I was younger,” Roz continued, “I thought stretch marks were so cool, but when I grew up I realized they were something to be covered… and I thought, ‘imagine if someone I looked up to when I was younger posted a real image of themselves and not an edited one, I would have felt so much better’. And that is why I did the post.”

Leading a healthier lifestyle can often lead to increased body positivity. Roz, for one, believes it definitely helped her to accept her body more over the years, saying it “made me more appreciative of my body and has stopped me going through phases of binging and purging.”

Attempting an abundance of new recipes can be overwhelming for some, but slow and steady wins the race. Roz says, “a really good thing to do when you want to get more into cooking (and be more aware of what is going into your food) is taking one recipe a week. By the end of a month, you will have four new recipes in your repertoire.”

That being said, slow and steady doesn’t seem to be on the cards for Roz Purcell at this moment in time. Her star is rising fast and furiously, which seems only fitting for a powerhouse.