Miley Cyrus, her divorce and the kiss: how society is undermining a queer woman’s sexuality

Media coverage of Miley Cyrus continuously declares a queer woman’s sexuality is something entirely defined by the gender of their partner and not their own lived experience.

In May, writer Julie Bindel wrote a piece for The Spectator entitled ‘Why are boringly straight women claiming to be lesbians?’, an ignorant, offensive and troll-worthy column where Bindel declare herself the grand arbiter of other people’s sexualities. According to Bindel, queer women don’t exist, because “real lesbians commit to the role”.

“Cyrus is as heterosexual as the next woman. Labelling herself ‘queer’ is as convincing as me deciding my dog is a goldfish.”

“But nothing riles me like the Miley Cyrus approach which is to be heterosexual, married to a man, but claiming to be ‘queer’ and edgy,” writes Bindel. “In a recent interview about her marriage to Liam Hemsworth, she said: ‘We’re redefining, to be fucking frank, what it looks like for someone that’s a queer person like myself to be in a hetero relationship.’ What a load of pretentious baloney. Cyrus is as heterosexual as the next woman. Labelling herself ‘queer’ is as convincing as me deciding my dog is a goldfish. While I get the envy that many women feel towards those of us that shop around the corner, it is a bit low to want the attention for being ‘special’ while being boringly straight.”

Bindel’s column and attitude doesn’t just indicate a basic lack of education or awareness around sexuality, and a bizarrely proud lack of empathy that prevents her from acknowledging the validity of experiences beyond that of her immediate social circle.

Miley Cyrus publicly came out as queer and gender nonconforming in 2015 (she has so far seemed most comfortable with she/her pronouns), later explaining that she is pansexual. “My whole life, I didn’t understand my own gender and my own sexuality. I always hated the word ‘bisexual’  because that’s even putting me in a box,” she told Variety.

Nothing in Cyrus’ description was ambiguous, but still writers like Bindel insisted Cyrus was “really” straight. Why? Because Cyrus married a man.

Instead of respecting that Cyrus’ sexuality exists fully in its own right, regardless of her current relationship, the headlines instead declared that Cyrus was “Back Straight”; she had been “Tamed”.

These self-appointed gatekeepers of sexuality subscribed to and perpetuated the damaging idea that queerness is an immature “phase”; a deviance or wildness that will eventually right itself. The media decided that a queer woman’s sexuality is something entirely defined by the gender of their partner, and not their own lived experience. As usual, a woman who challenged social norms was told that she didn’t understand her own life.

Tangentially, it’s interesting to compare the discourse around Miley Cyrus to that of Love Island star Curtis Pritchard, who said earlier this month that though in a relationship with Maura Higgins, he “wouldn’t rule out” being with a man in the future. 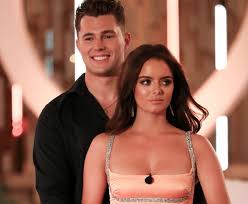 Just as Cyrus’ sexuality was diminished and erased as people accused her of “really” being straight, Pritchard faced a torrent of abuse from people declaring that he’s “really” gay. This pervasive and deeply gendered attitude towards bi and pansexuality highlights society’s exhausting belief that all orientations eventually point to men.

As Cyrus and Liam Hemsworth announced that they are divorcing, Cyrus was spotted out with Kaitlynn Carter – and another facet of society’s derogatory beliefs around queerness emerged: the hypersexuality of queer people.

“While Cyrus kissing Liam Hemsworth was evidence that she had been ‘tamed’, kissing a woman was wild, deviant, inappropriate, in need of policing.”

Cyrus and Carter were seen kissing in a nightclub – just kissing – and yet the headline of a Page Six article declared that the two women were “basically having sex”. This headline perpetuated the idea that queerness is innately hypersexual.

While Cyrus kissing Liam Hemsworth was evidence that she had been “tamed”, kissing a woman was wild, deviant, inappropriate, in need of policing; feeding into commonly expressed beliefs that bisexual and pansexual people are just “sex-obsessed”, “greedy”, or promiscuous. Describing the act Cyrus kissing another woman as them “almost having sex” is not incidental; it overtly implies that queerness itself is obscene.

This rhetoric exemplifies the erasure and hypersexualising that queer and bisexual people constantly face, and these attitudes have real and dangerous consequences.

Queerness, pansexuality and bisexuality are not synonymous, but even a glance at the more readily-available research around the experiences of bisexual people shows how people who people who are not monosexual (ie: people attracted to two or more genders) face real and dangerous consequences. Multiple reports indicate they experience more violence, partner abuse, and sexual assault.

“The media, and pornography in particular, have long depicted women’s bisexuality as less about sexual agency and more about the pleasure of straight men.”

In a CDC report entitled National Intimate Partner and Sexual Violence Survey, Pennsylvania-based researcher Dr Nicole Johnson estimates that up to 75% of bisexual women have been raped or sexually assaulted, and identified that hypersexualisation and biphobic harassment were leading factors in these forms of violence.

“The media, and pornography in particular, have long depicted women’s bisexuality as less about sexual agency and more about the pleasure of straight men, which may result in the dehumanisation and objectification of bisexual women resulting in increased acceptance of violence [against them],” says Dr Johnson.

In spite of the elevated levels of abuse and sexual violence experience by bisexual people, they are often overlooked and erased from society at large and even within the LGBTQ+ community. Often referred to as “the invisible minority”, bisexual and pansexual receiving little or no specific support resources or funding, and often feel excluded from LGBTQ+ communities, which can lead to feelings of isolation and contribute to mental health issues.

A 2017 report in Preventative Science showed that bisexual people are more likely to experience anxiety, depression and suicidal thoughts because they don’t feel welcome in any one community.

“Given that isolation and discrimination, bi people might be experiencing increase factors that might make them more lonely or isolated.”

Lead researcher Ethan Mereish explained: “Bisexual people face double discrimination in multiple settings — bisexual people are often invisible, rejected, invalidated, [and] stigmatised in the heterosexual community as well as the traditional LGBTQ communities. Given that isolation and discrimination, bi people might be experiencing increase factors that might make them more lonely or isolated.”

The dismissive, erasing, and hypersexualising language currently swirling around Miley Cyrus points to the pervasive and dangerous stigma facing queer, pansexual and bisexual people. By policing queer people, telling them they have to pick the “right” gender or they will be ignored, hypersexualised or abused, we are endangering them.

Cyrus once described herself as a wrecking ball. It’s about time we welcomed the destruction of society’s rigid walls and belief systems around sexuality, and embraced some openness instead.