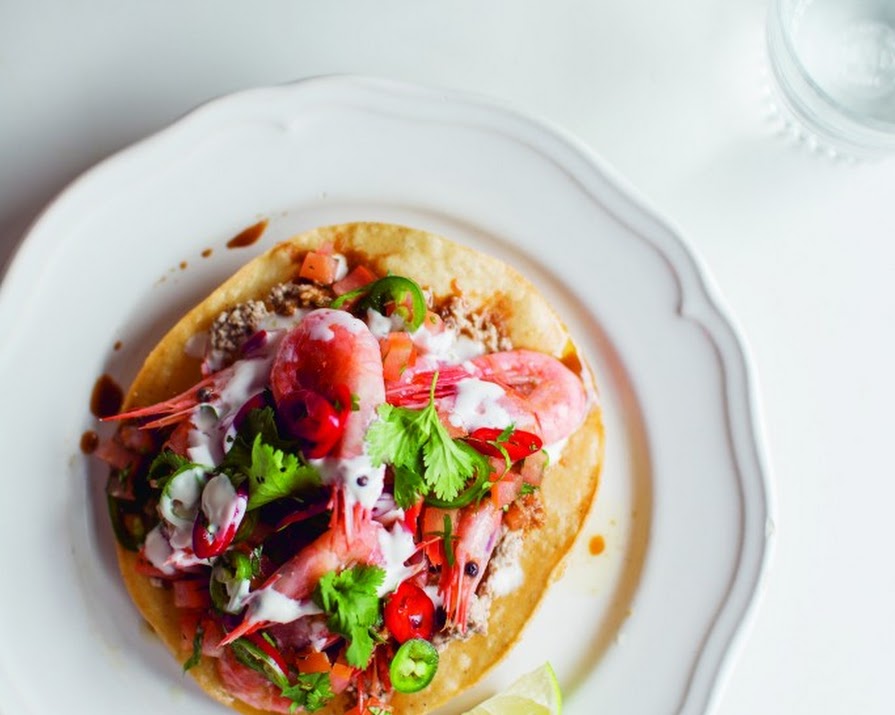 My friend Gabe Pryce, owner and executive chef of Rita’s, makes food that’s totally my kinda vibe. He’s been bastardising and mashing up various food cultures for years. He calls his food ?Modern American? comfort food, meaning that it takes inspiration from all over the place: Southern American, Jewish, Mexican and Italian. Think peanut brittle, fish tacos, patty melts, elotes (Mexican street corn), panzanella and fried chicken with waffles. When Rita’s first opened its doors, I supplied their pickles and kimchi. Every week I’d send a taxi with a couple of massive jars their way. It felt like a no-brainer to ask him for a recipe to include in my book. Just like my friend Missy Flynn, also of Rita’s, Gabe loves to bring a Mexican vibe to the table – here in the shape of a shrimp tostada. Gabe says, ?This recipe is pretty much a Mexican sm?rrebr’d. Which isn’t a thing, but I like the sound of it. It’s not a traditional Mexican dish at all, but it has shrimp, beans, tequila and beer in it, which in many cultures are traditionally delicious.?

Method
A day before you want to eat this, pickle the shrimp. Bring a pan of water to the boil with half a tablespoon of salt and add the shrimp. Cook for 2-3 minutes, then drain and plunge into a bowl of ice-cold water. Drain again, then simply slice down the length of the back of the shrimp and remove the poop sack. I’d leave the heads on, as they’re full of flavour. But you might want to remove the heads, peel and devein, leaving the tails on if you want a bit of a crunch. Place in a bowl and refrigerate while you make the pickling liquid.

In a pan, combine the vinegar, remaining salt, sugar and 400ml of water. Bring to the boil and stir until the salt and sugar have dissolved. Remove from the heat and allow to cool to room temperature.

Decant the liquid into a clean, airtight container or a large, clean jar. Add the jalape?os, bay leaves, black peppercorns, red onion and lemon zest to the bowl with the shrimp and give it all a good muddle. Pack it all into the container or jar. Pour over the pickling liquid and close the lid tightly. Chill for at least 12 hours or, ideally, overnight, removing from the fridge a couple hours before serving.

To make the salsa, preheat the oven to 180?C/gas mark 4). Drain the chipotle chilli and put in a large roasting tin with the tomatoes, red chillies, onion and beer. Drizzle with loads of olive oil and season with salt. Roast for about 1 hour, until the chilli and tomato skins start to blacken and blister.

While the tomatoes are roasting, smoke the aubergine. Put the aubergine directly over the flame of a gas hob (or alternatively, you can use the barbecue) and char, using tongs to turn every so often, until the skin blackens and blisters on all sides. This will take about 15 minutes. Take off the heat and chop off the stalk and discard. Set aside to cool briefly.

When the tomatoes are done, tip them into a food processor and add the aubergine. Blitz to a smooth paste and season with salt, lime juice and tequila. Set aside.

Next, make the beans. Rinse and drain the tins of beans, and set aside keeping each tin separate. Heat a glug of the oil in a large frying pan, add the onion, garlic, chilli and oregano and cook over medium heat for about 10 minutes, until the onions are softened and starting to brown. Throw in one tin of beans and cook over medium heat for 5 minutes. Transfer to a blender or food processor and pur?e until smooth. Remove from blender and stir the remaining whole beans through.

Now, heat a pan with the oil and, taking one corn tortilla at a time, fry it quickly until stiff and crispy and a little bit golden brown. Remove the tortilla and drain on some paper towels to absorb any excess oil.

Working quickly, spread a tbsp of the bean mixture across the tortilla in an even and smooth layer, top with the pickled shrimp and the salsa borracha. Garnish the tostada with chopped coriander, finely diced onion and season with salt and pepper. Finish with a drizzle of soured cream and serve with a squeeze of lime. 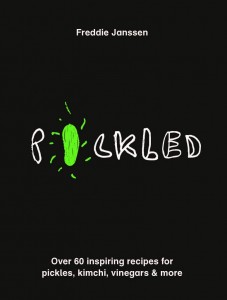