With Oscar buzz building around her latest role, Michelle Williams is rewriting Hollywood’s rulebook. In this exclusive Irish interview, STEPHEN MILTON learns the key to her personal and professional success, and why she’s finally done with crying.

Does this facilitate the thought process? Is it a means of digesting the relatively short time I have with her? Or is it a subtle method in stealthy intimidation?

I meet her fixed eye contact, and we continue to stare at each other. She gently, slowly blinks heavy wafting lashes and brushes her fingers past neatly folded legs.

?I’m hooked on risk,? she finally responds. ?I’m hooked on trying out things that I’m not sure I’m able to do. I always want to see how far I can go.

?But that’s it for me, I’m not like that in any other aspect of my life. I’m a safe driver. I’m not too ambitious in the kitchen. I wear the same clothes every day. It’s only in my work where I exercise this desire to experiment wildly and risk colossal failure. I don’t know why exactly. I think it’s because… you know, I really don’t know why.?

In a navy velvet Louis Vuitton smock dress and black ankle boots, the three-time Oscar-nominee is genuine in person. Her soft giggle is comforting, and her responses have heart. And the long pauses soon feel natural and unusually charming.

We meet in a Central London hotel suite to talk about her work in Manchester by the Sea, a raw, moving portrayal of the human relationship with love and grief.

She plays a mother shattered and broken by loss and struggling to reconnect with her ex-husband (Casey Affleck), who resurfaces from self-imposed exile after his brother dies and he finds himself guardian of his 16-year-old nephew.

Both Affleck and Williams deliver visceral, poignant performances in Kenneth Lonergan’s emotional masterpiece, and it’s the first time the actress has examined the despair of death in her work since the passing of Heath Ledger – father of her eleven-year-old daughter Matilda – in 2008.

A sobering subject matter, I wonder?

Michelle, 36, smiles crookedly and looks beyond my shoulder.

?I don’t think you’d be human if it didn’t affect you. That’s impossible to avoid. But you try to compartmentalise your work away from your own life, especially when you’re working on a deeply emotional script. And working on this, soon as I was done, I would go home and check on my sleeping child.?

Her entire face smiles at the mention of her young daughter. The pair share a home in Brooklyn with a cat, a dog and a fish, in what Williams describes as ?the makings of a petting zoo?. 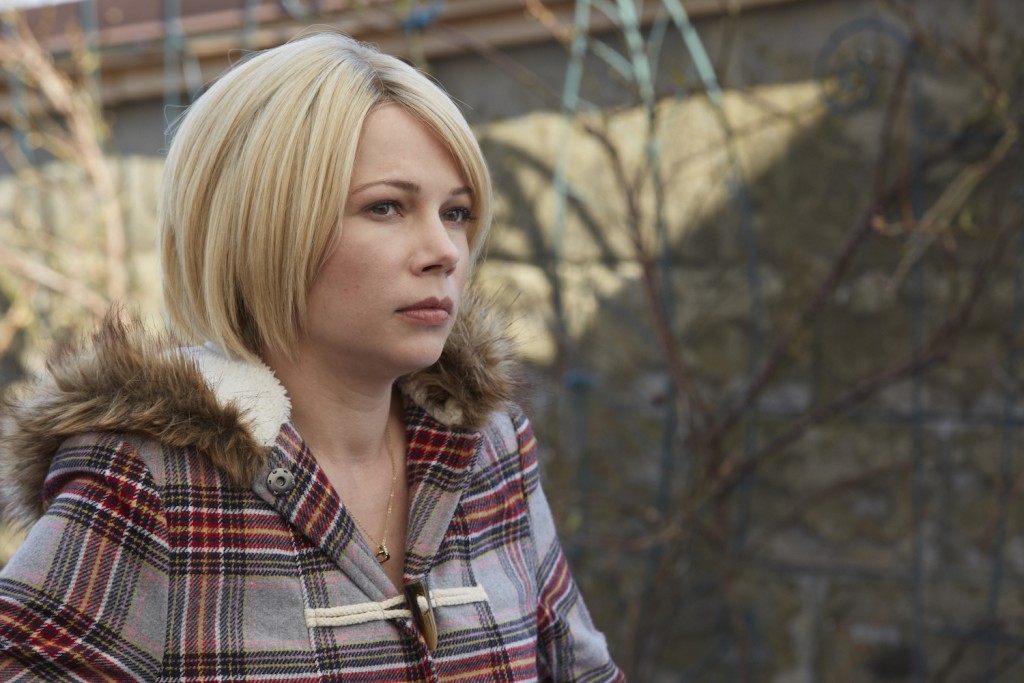 Williams in Manchester by the Sea

And every night after shooting along the ice-lashed Massachusetts coast, the emotionally drained actress would hug Matilda extra-tight. ?I think she was like, ?Mom, what’s up? You’re being a tad more clingy than usual.? But I needed more hugs. I did.

?Because the thing about being a parent is you kind of run co-existing realities. The reason you’re so careful with them in terms of their safety is because you know that things can go wrong. It’s an awareness that we all have as parents, and we try not to dip too far into. To lose a child is the worst possible thing in the world to imagine, but it’s not unimaginable.?

Thanks to her glowing turn as the ever-ebullient Jen Lindley on Dawson’s Creek, Williams was a teen star. And like fellow actors Katie Holmes and Joshua Jackson, the Montanan used her bankable cachet to cultivate a big screen career with slasher/thrasher Halloween H20, bubble-gum politico drama Dick, and cult teen classic Prozac Nation.

But it was Brokeback Mountain that pushed her into the big leagues. Meeting and falling for Ledger on set, Williams? raw power scooped an Oscar nomination in 2006, and Hollywood saw the former tween dream in a new light.

Is there a woman alive who wouldn’t call herself a feminist?

Turns in Synecdoche, New York and Wendy and Lucy saw an actress willing to gamble on quirky, challenging stories. Scorsese signed her up for Shutter Island and she landed her second Oscar nomination, alongside rumoured one-time love Ryan Gosling, for Blue Valentine.

A third nomination followed a year later for a daring, fascinating performance in My Week with Marilyn. A fourth will surely follow for Manchester.

Largely devoid of any big money blockbusters (save for 2013’s Oz the Great and Powerful – ‘something I did for my daughter,? she tells me), it’s a career that rewrites the rulebook.

?Wow,? blushes the actress, curling her bright blonde fringe behind her ear, ?to hear that means I’m doing something right.

?I really take it very moment by moment, just trying to respond honestly about what interests me in that time of my life, not what’s going to be a strategic move or a balancing move. Just ?this is who I am and it’s what I want to do.?

?Like right now, we’re shooting this movie in Brooklyn, ten minutes away from where I live. It doesn’t get better than that. I can walk there every day.

?It’s a musical [Barnum, based on the life of circus magnate PT Barnum] and it’s with Hugh Jackman, and when I was doing Cabaret on Broadway, I fell in love with singing and dancing, and I thought, ?I need to get me some more of this. I just don’t know where I’m going to find it. My god, give me some more.?

?So it was like, ?perfect timing?. I need this, I need to sing and dance. I want more of that good feeling, so that’s what I’m doing now. I’ve done enough crying.?

Our meeting coincides with the London Film Festival and later that night, she would step out in the city’s Leicester Square in another dazzling Vuitton creation (she’s been a face of the French brand since 2013) for the European premiere.

Nearly half the films headlining the festival this year are directed by women. I wonder if Williams sees this as an indication of a positive change in gender equality in Hollywood.

?No,? she answers, ?not really, if I’m being frank. I don’t think it’s changing. I can’t say that I’ve seen a massive shift in the way that women are treated as opposed to how men are treated. I don’t see any change. Which is sad and frustrating. I think it will take a really long time for any noticeable difference to happen.?

Sarah Jessica Parker, I reply, who sees herself as a ?humanist rather than a feminist?. Katy Perry believes it’s too strong a label. I continue to rattle out other well-known names with similar ideals.

Perhaps exacerbated by the topic, Williams clears her throat and quietly interjects.

?I don’t know, I don’t really think that way necessarily… ?I am this title, I am that title.? You know, I’m an American, I’m an actress, I don’t think of myself in outside terms, I just think about what I do.?

She twists her skinny legs underneath the chair. And then fixes her penetrating gaze upon mine. We sit in silence for a brief moment and both smile.

Looking forward to awards season? I ask, keen to hear that charming snigger again before we finish up.

?God, that’s months away, so you know, we’ll see,? she cries. ?It’s far too early. I try to not let myself get too invested in what might happen. Because I’m probably setting myself up for a fall.?