Today the consistently fabulous Google Doodle marked the birthday of Simone De Beauvoir, the renowned French writer, political activist, founder of modern feminism and philosopher. Born on this day in Paris 106 years ago, she achieved lasting fame as the author of The Second Sex, an analysis of what it means to be a ?woman? in western civilization which contained the famous line: ?One is not born, but rather becomes, a woman.? 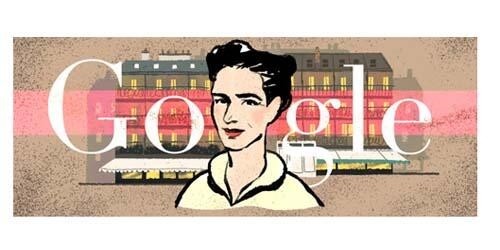 De Beauvoir enjoyed a turbulent lifelong relationship with fellow philosopher Jean-Paul Satre, turning down his proposal of marriage and choosing to live separately in order to pursue her writing, while they both pursued affairs with other lovers. Besides The Second Sex she wrote novels based closely on the literary set she was part of as well as being a highly regarded journalist and editor. She died of pneumonia in 1986 and is buried next to Sartre in Paris.

To honour her birthday we’ve selected some of our favourite quotes of her to inspire, empower, or just to get you thinking. Thank you Simone.

?I am too intelligent, too demanding, and too resourceful for anyone to be able to take charge of me entirely. No one knows me or loves me completely. I have only myself??

?What an odd thing a diary is: the things you omit are more important than those you put in.???

?If you live long enough, you’ll see that every victory turns into a defeat.???

?Few tasks are more like the torture of Sisyphus than housework, with its endless repetition: the clean becomes soiled, the soiled is made clean, over and over, day after day.???

?Fathers never have exactly the daughters they want because they invent a notion of them that the daughters have to conform to.???

“Sex pleasure in woman is a kind of magic spell; it demands complete abandon; if words or movements oppose the magic of caresses, the spell is broken.”

?To be oneself, simply oneself, is so amazing and utterly unique an experience that it’s hard to convince oneself so singular a thing happens to everybody.???