The final series of Mad Men premieres tonight (well, half series, strictly speaking – this is series 7, part 2) at 9pm on Sky Atlantic. We have to say, the countdown to the demise of one of the most stylish shows ever to appear on telly has us feeling more than a little nostalgic. So, scroll down for a trip down memory lane as Team Interiors recall our favourite sets from the show’s run? Vodka martinis at the ready! 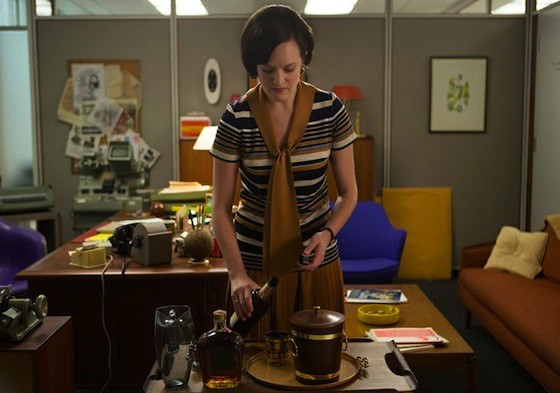 I love how Peggy’s office d?cor?paralleled her increasing confidence – this one is from season 7 – but she wasn’t afraid to add a feminine touch. The warm brown and orange tones just scream mid-century while the pops of purple, yellow and lime green hint at trends to come. And hey, who doesn’t want a bar cart complete with an ice box in their office?
Nathalie Marquez Courtney, editor

The kitsch kitchen of Betty and Don’s Westchester County home from season 1 may look like a sensory nightmare to us today – a preponderance of plaid wallpaper, far too much varnished wood and powder-blue lino floor ??but it perfectly captures the Sixties suburban dream. File it under ‘so bad, it’s good’. Sharon Miney, deputy editor

Want more of the Mad Men look? We’ve caught up with one of the top mid-century experts around… In an exclusive interview coming up in our next issue of Image Interiors & Living (out on April 23), MM set decorator Claudette Didul gives us a rundown of what it’s like to work for one of the slickest shows – plus tips on how to create the look in your own home… not to be missed!

For mid-century furniture a little closer to home, check out the latest finds in the Cross Collection.