An Excellent Choice: The story of having children through artificial insemination

We are in the midst of a wave of books on motherhood. Sheila Heti’s Motherhood considers the question of whether to even have children in the first place. Lara Feigel’s Free Woman: Life, Liberation and Doris Lessing examines the story of a woman who left her children with their father when her marriage ended. Meaghan O’Connell’s And Now We Have Everything: On Motherhood Before I Was Read  is a frank account of the often brutal reality of childbirth and the early days of motherhood.

And now An Excellent Choice, by author and Guardian journalist Emma Brockes, tells the story of the decision to have children on your own, by a process of artificial insemination.

Thirty-seven when the book opens, a writer and freelance journalist, Brockes is living in New York, in a relationship with another woman. Both have been “around long enough to know our own natures and be somewhat unflinching in regard to accommodating them,” she reflects. The situation works thanks to the maintenance of a certain independence; they do not live together. Both want a baby, just not each other’s baby.

So in the pursuit of motherhood, Brockes is to all extents on her own. The options available to a single woman in her late thirties are not, she writes, “wildly attractive.” Luck, promiscuity, settle for a partner “you’re not wholly into,” give up or “pull the emergency cord and do it alone.”  Brockes chooses the latter.

“The hardest thing about having a baby alone is making the decision to do it,” Brockes writes. Worse than the fear, the loneliness, the actual process of getting pregnant, the feeling of otherness, and the knowledge “that the reason you are doing it is not because you are a powerful, rational, resourceful woman, but…because ‘I couldn’t get anyone to shag me’.”

Brockes’s mother, now deceased, is an ever present back drop to the narrative; the author’s perception of motherhood has been informed by her. An only child, she was she says, the love of her mother’s life. She “believed that the only guaranteed love in a life is for one’s child, on whose account another adult might be loved, loathed or simply tolerated, but who would never come close to being loved in the same way.”

With this as a fundamental belief, Brockes had always known she wanted children, but in a passive rather than active way. On being asked ‘do you have children’ she would think ‘are you mental, I’m about eleven’.

On leaving university, the only people who had children were friends who instead of moving to London after college, returned home to marry their college sweetheart, much to the contempt of Brockes. Throughout her twenties, working in London for the Guardian with a tight group of beloved, also single and childless friends, the idea of being married with kids and moving to the suburbs was the worst possible imaginable outcome. Fifteen years later “these people would have their revenge: those who can, breed, those who can’t, are screwed.”

Acknowledging the desire for a child risks opening Pandora’s box. As a journalist, Brockes brings a sort of forensic curiosity to the project, infuriated that “any two-bit newlywed with a baby could lay claim to a superior knowledge of human existence.” But there is also the possibility of tapping into something deeper, “a larger, less tangible longing, I didn’t want to look into it too deeply lest it unleash a full-blown baby hunger I couldn’t get back in the box.”

Brilliantly observant and laugh-out-loud funny, Brockes brings a highly pragmatic perspective to her subject, the matter of having a baby with “a blank space.” Conceiving without a partner is “an inorganic process.” She despises crank remedies, observing that the only good thing about not getting pregnant after drinking raspberry tea is that success would have meant an entire rearranging of one’s ideas to accommodate the possibility that herbal remedies actually work. Romance is “the basis on which women have been making bad decisions for millennia.”

She struggles with the idea of bringing a child into such an unusual set up. L has a baby but lives separately. There is unease in being so far outside the traditional delineations of what a family is. “Not belonging to a well-defined category alarms me. I have no words for what I am to L’s baby and I have no idea what she will be to mine, and its lack of a language implies something is wrong.” Ultimately, she concludes that their family is “just one variable among many.”

Living in New York helps- eventually Brockes and her daughters end up in an apartment block where their entire floor is inhabited almost entirely by single women.

Memoirs on motherhood are often honest to the point of gory, occasionally navel-gazing to the point of being somewhat dull (Heti). Rarely are they as witty as Brockes’s account.

After one failed attempt, she ventures onto the online forums, a “dangerously seductive” potential black hole full of infinitely sad but jolly shorthands. For anyone embarking on fertility treatment, she advises “write a list of all the acronyms you never want to find yourself using, and the number of jaunty exclamation points beyond which someone needs to reach in and pull you out.”

Learning that she has a particularly large amount of eggs one month, she struts proudly, “feeling great about myself on account of me MASSIVE EGG STASH. Suddenly I understand why men go in for penis enlargements.”

Fertility treatment can be brutal on relationships. “The emotional cost of trying to get pregnant has to be balanced out with an input of joy,” Brockes observes. When she announces she is expecting twins, L abruptly announces she plans to have another child. The “cultural cues telling women that children are currency,” are at play. She imagines a scenario where a sense of one-upmanship escalates to the point of “an arms race that climaxes in us having nine kids apiece and scoring the reality show of Dr B’s dreams?”

There is though, much to be said for a partner who has been pregnant before, as opposed to the typically scared or awed male spouse, in need of as much if not more reassurance than the mother.

Eventually, she and L live in the same apartment building, on different floors. “What even to call it,” she muses. “Parallel parenting? Proximal parenting? Parenting in each other’s general direction?”

It’s parenting, but not as we typically know it. Which is one of the many reasons to read this funny, brilliantly perceptive book. 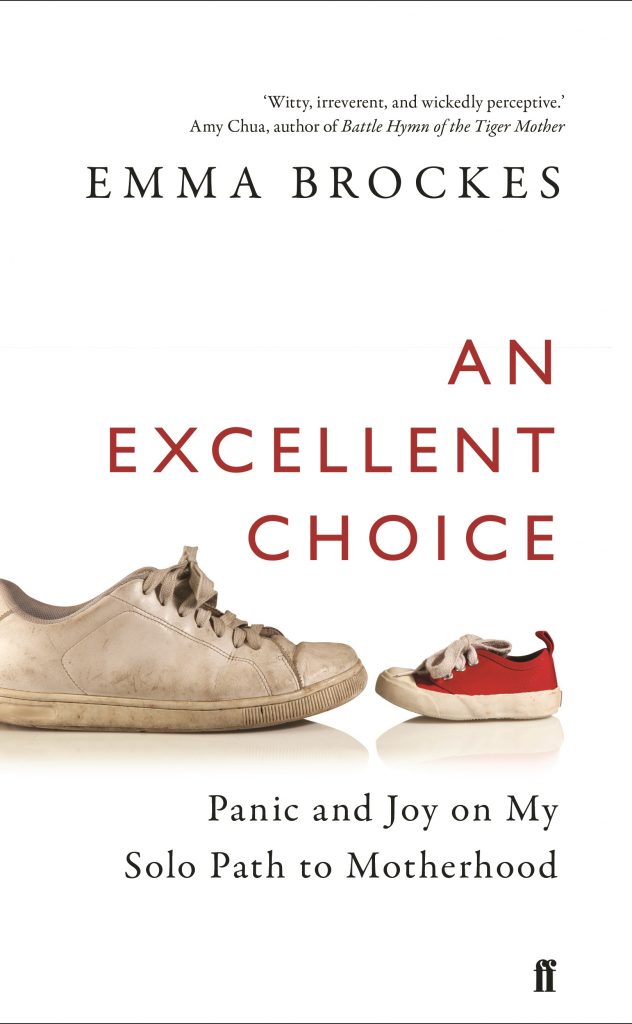