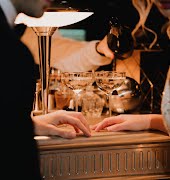 The Eighth Amendment: The real lessons we’ve learned from this campaign

Abortion has always stood apart from every other political topic in Irish culture. It has remained morally contested in a way that other social topics have not. Perhaps it was inevitable that such an incendiary issue would descend into a slagging match between activists, weaponising facts across a no-man’s land of mistrust and moral criticism. Amanda Cassidy reports on what this referendum campaign has really revealed.

“Liar,” Mattie McGrath directed across the audience towards the panel on the contentious televised RTE discussion on the abortion referendum last week. The Independent TD was referring to Dr Peter Boylan’s contribution about the tragic death of Savita Halappanavar. Just minutes before, People Before Profit TD Bríd Smith called Maria Steen, a pro-life campaigner, a liar too, and said she wouldn’t be apologising. Maria Steen who is from the Iona Institute then referred to terminations in certain circumstances as ‘social abortion’. And that wasn’t the worst of it. Slowly, the programme descended into a brutal, abusive and very personalised debate with highly inappropriate jeering and howling. Seeking balance was always going to be a challenge but the point-scoring and disrespect shown by some was an eye-opener, and that didn’t escape the public at large.

As we slide into the final days of campaigning for the referendum on the Eighth Amendment, it has become very clear that this is the most divisive topic this country has ever lived through in recent times. It has also become clear that there is no obvious middle ground. Those on both sides of the debate in this country have firmly and sincerely held philosophical, religious, moral and social convictions. The main battleground for many has been across social media, where we’ve see unscrupulous baiting from both sides. But is this at all helpful in the context of progressing our nation, and how is this catfight benefiting our democracy? From great heat doesn’t always come great light, or enlightenment – and Twitter seemed to agree. 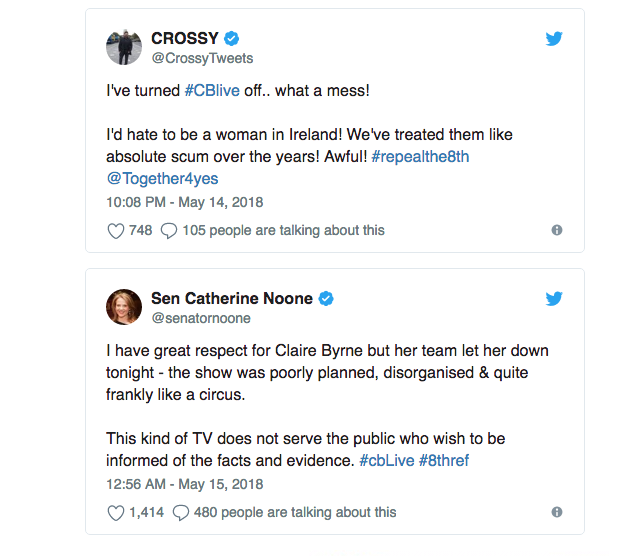 Twitter has been the platform for the most outspoken debate on social media throughout the entire campaign.

But it also begs the question if we are seeing a small number of politically engaged activists slugging it out online, oblivious to the swaths of Irish citizens who are not a part of that clique, or if this argument is an accurate representation of the Irish electorate? 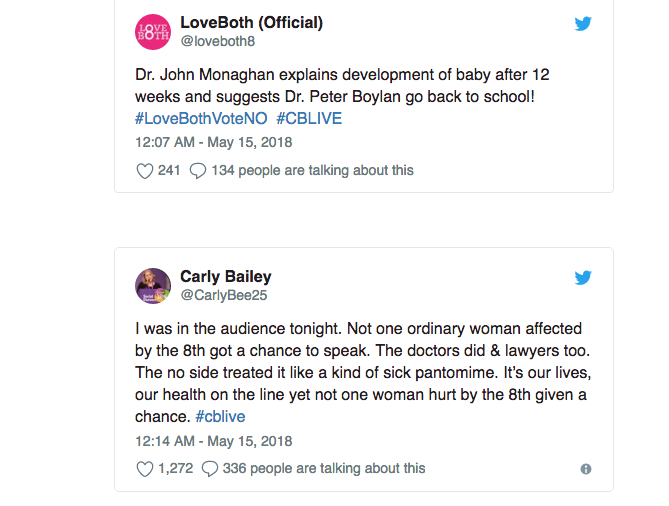 The debate around the referendum has been massively polarised on most fronts. It has raised controversial and contentious narratives on both sides. However, there have been some aspects of the ‘No’ campaign and its choice of visuals that have provoked the angriest response from the other side. The graphic images prominent on posters and paraded outside maternity hospitals are considered by many not only deeply offensive but extremely sensationalist. However, the ‘No’ side says that the ‘My body, my choice’ pro-choice campaign slogans are simply a fallacy, as Nick Folley from Cork outlined in a letter to the Life Institute last week:

“Being a popular slogan does not make it either true or wise. In actual reality, we already accept some limits on bodily autonomy in the name of the common good. For example, people can drink alcohol, but then are expected not to drive. Nor do we encourage – or worse, enshrine into Law – some kind of right to self-harming. If ‘my body, my choice’ were really true and a self-evident virtue, we would not make any unilateral effort to help people who wish to self-harm, or who suffer from eating disorders – indeed, we would not even dare call them ‘disorders’ for fear of giving offence. At a bare minimum, the right to personal bodily autonomy must of necessity be limited where it might extend to causing harm to others. And in the case of self-harm or eating disorders, we even accept limits where the harm is principally to ourselves. That we can’t always stop self-harming does not imply we ought either embrace or enshrine it into law.” 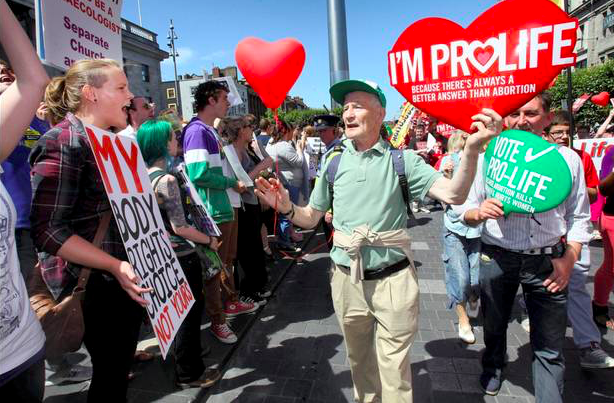 But as we have learnt in the past, nothing is this black or white – especially when it comes to the topic of termination and women’s health. This referendum also prompted Irish author, Anne Enright to pen a very powerful piece in the Guardian newspaper outlining why she was advocating a Yes vote.

“[The pro-life view] They did not care about the psychological consequences, and the cruelty of that indifference was hard, as a society, to live with. Arguments about suicide (how to believe her?), about rape (how to believe her?) reinforced the fact that “a mother” could not be in charge of herself, because she had no self in the way we usually understand the word – this was set aside, for the duration. Once impregnated, a woman was reduced to a body, and that body was no longer hers. On the one side, we have miracle, on the other, meat.”

The last few weeks of this campaign have been described more than once as a ‘circus’. We’ve seen celebrities come out to lend their opinion to the debate. We’ve had doctors and solicitors divided. Women dressed as angels in white, blocking the pro-life posters with graphic images outside hospitals. We’ve had international outside influence, posters being ripped down in the dead of night and dramatic press conferences on both sides. We’ve heard that women are not incubators. We’ve heard that killing a foetus is murder. We’ve had brave souls catapulted into the public eye to tell their own sad stories to bolster one side or the other.

And amongst all this noise, the jostling and shouting and contradicting, the waving of disturbing pictures and repeal-jumper-wearing, there is a silence that makes my heart break. It is the silence of those who matter the most.

It is the quietness of all those who have an ache in their heart because their baby was simply incompatible with life and had to fly their body home in a box. It is the quiet reflection of the teenager who was adopted and wonders if abortion was widely available here would he be alive. It is the sadness of all those who privately and quietly know the decision they are going to make on Friday and don’t have the stomach to shout about something that is so deeply personal to them. It is also the silence of all those who will inevitably lose out depending on the outcome of the vote – the not-yet victims of all of this. Perhaps both sides need to stop telling people how they should vote, and instead inform them of the truths, advise them of the consequences of their vote and trust that people have their own instincts on this.

On Friday, we will be asked if we want to repeal the Eighth Amendment from the constitution completely and insert new wording which would allow the Dáil to legislate for new abortion laws for Irish women. This means that were the referendum to pass, abortion would not be available straight away. It means that the government would have the power to bring in new legislation that allows for abortion to take place under certain circumstances. If you want to educate yourself further to what this will mean for you and for your country, here is some more, independent information.

The struggle for many is that abortion, in general, is simply hard to vote ‘for’. But remember, that isn’t the question you are being asked on Friday. We need to stop with the petty insults and personal attacks and sensationalism and confusion and focus on the type of society we want to be a part of. Whether you place more importance on a woman’s bodily integrity or on the rights of a foetus, well, that’s your prerogative – but it will be interesting to see if the losing side respects the result when the people have finally spoken.