Dolly Alderton’s First Book: Is It Worth All The Hype?

Last weekend Laura George (IMAGE Editor-At-Large), and Geraldine Carton (IMAGE intern) were given a task: read Dolly Alderton’s much-hyped coming-of-age autobiography Everything I Know About Love, and report back .

One book, two perspectives; this is what they had had to say about it…

What could this 29-year-old have done in her relatively-short life to provide enough content for a whole book? Did she break some word record? Have a near-death experience? Or maybe she took part in some popular uprising against a fascist dictator? In fact, Dolly Alderton did none of the above. She was a former writer for Made In Chelsea who then became a much-loved journalist for The Times, and now has a successful podcast named The High Low (which is well worth a listen).

Everything I Know About Love addresses the subject of love in all its nuances and facets, with a level of honesty that is undeniably refreshing, and with stories and musings that many a mid-twenty female can identify with.

The book is filled with anecdotes about bad dates, good dates, awful men, and countless hangovers. I expected most of that, considering the hints that were given at the back of the book, but what I didn’t expect was the inclusion of friendship and self love amongst all the one night stands and smooches. Dolly talks about her core friend group with with all the warmth and supportiveness of a sister, and admits to the pangs of jealousy she felt when her closest friend finds a boyfriend, not an easy admission to make.

It’s hard to imagine that someone as seemingly self-assured as Dolly, could find herself in the depths of an eating disorder. In the book Dolly is open about what brought on the illness, the distorted thinking and unhinged self-destruction, which serves as a good “consider yourself warned” warning for all young people who may find themselves feeling slightly vulnerable in this image-centric world.

Alderton’s tone is witty, her descriptions well-formed, and her use of dialogue, exceptionally accurate to real life. For me, however, the book lacked real book-worthy substance. From the hype that I had heard about this I was expecting something at least semi life-altering, and all I got was a few chuckles and a so-so way to pass the time. If I read some of the book’s excerpts as a stand-alone newspaper/ magazine column I’m sure I’d think Dolly a comedic and literary genius. Reading about her not-hugely-out-of-the-ordinary life, page after page? I’ll have to admit that at several points my attention drifted. 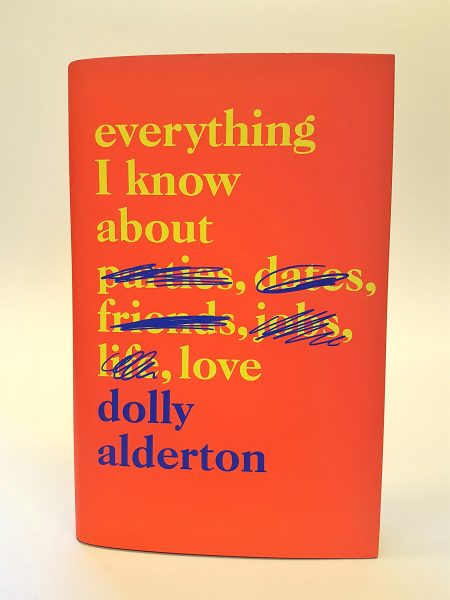 When two advance, embargoed copies arrived in the office, we clawed and climbed over each other to get our mitts on them.

We’re not sure it was worth the scuffle. If you’re under 30, love Alderton’s columns about beauty and dating in The Times and perhaps have done some time living in London, the memoir gets a mildly enthusiastic thumbs up (see above). If you’re a little more jaded, it feels even more slight. Not just because she hasn’t much life experience to draw on (she doesn’t) but because most of her musings about what she has been through just don’t carry much weight.

The most touching, and potentially interesting, part of the book deals with the death of her best friend’s little sister, Florence, but again it’s fair to say other books have approached the death of a charming young woman a lot more thoughtfully. If The Spirit Moves You, for example, by Harper’s Bazaar Editor Justine Picardie, will literally have you reaching for your second box of tissues before you’re ten minutes in  (and her sister Ruth’s firsthand account of her illness, Before I Say Goodbye is unforgettable).

Granted, in Alderton’s book Florence isn’t the main event – her sister Farly is. And while Dolly and Farly’s relationship is sweet, it just can’t carry a whole book. It feels more suited to a blog or small series of newspaper columns, which is where most of the material first saw light of day.

Anyway, what we all agree on, regardless of age, is that this book gives an entertaining enough glimpse into upper middle class, post-university life- it’s a sort of junior, plummy, very British Sex and the City (replete with Hectors and Florences ). We also agree that Alderton must be a lovely person to have gotten so much PR support from so many quarters.

This is a nice enough light beach or airport read – just don’t rush to bump something really good off your nightstand to make way for it. And certainly don’t fight with your colleagues over it.