I realise now that when it comes to divorce, nothing is set in stone

When Liadan Hynes’ marriage fell apart she had to work on adjusting to the new reality. In her weekly column, Things Fall Apart she explores the myriad ways a person can find their way back to themselves, as well as the realities of life as a single parent in Ireland

An editor of mine once gave me a piece of advice that has stuck with me over a decade later. We had just come off an extra project, a supplement we were putting together on top of the usual publication we worked on putting out. It had involved extra-long days, weekend work. We were standing in the hall of the fourth floor of our office, waiting for the lift, and I said something like, “what next?”

“No,” she said, “this wasn’t normal busy. Remember we were doing extra.” It’s quite easy, she continued, to take on something that means a temporary level of extra busyness, but to quickly get used to that extra busyness and without realising it, make it your new level of normal. It’s important to stop, and go back to the level you were operating at, she advised. Otherwise, that way burnout lies.

I’ve just finished a particularly huge, but ultimately temporary, project; writing a book, inspired by this column. It took almost a year.

Remember that feeling when you were doing the Leaving Cert, and your time was never really your own for doing nothing with? You could never look at a Sunday and think there’s a day I’ll do nothing with? Because there was always this never-ending list of things that needed to be covered.

Time to do nothing, or anything

And now my spare time is my own again. And I find myself carving out little bits of it in which to do nothing. And as well as doing nothing, going back to the things I like doing, but didn’t have time for in the past few months.

Because when you take on the extra level of busyness, some things go by the wayside. There isn’t time to see friends as much as you’d like. There isn’t time, or energy, for things like exercise. I don’t love exercise, I’m not really one of those people who crave it, but I know getting out and going for a walk, or doing something, does make me feel better overall.

As a non-exerciser, I found the kind of exercise I did actually come to like back when I was getting married, and became that cliched of things, the person who shreds to wed. That never lasts, but what also happened, was that when I started weightlifting, the headaches I normally got weekly disappeared.

And I noticed that I, a lifetime low-lying worrier, wasn’t worrying much anymore. Not to mention the satisfaction of weightlifting. Running, and most cardio, makes me feel bored and uncomfortable. Weightlifting makes me feel proud and strong. Like, look what I just did there.

I tried to go back, when my marriage fell apart, because I knew it had made me feel better in the past. But the thing about weightlifting is that it can be as much a challenge of the mind as the body. For me anyway. My mind needs to be able to tell my body it can do this. And back then, my mind definitely didn’t have it in it. I would try to lift stuff and just feel like crying. All it did was make me feel even more overwhelmed.

Two weeks ago, having nearly finished my book, I went back. It’s a small gym I go to; I have treated myself to some appointments with the trainer who first taught me to lift weights. He has since gained a daughter, I have lost a marriage; we catch up gently on both.

Unlike the big commercial places, this is basic. There are no mirrors, which I love; looking at what I’m lifting is another form of mental load, I don’t want to see how heavy it looks, I can feel that already. I remember all the moves, we slip easily back into the routine. When I came here first, it made me realise that the person I thought I was, a non-exercising low-lying worrier, wasn’t set in stone. That these things can change.

More increasingly now, I realise that after a marriage falls apart, the kind of person you think you might be at the start, someone who is always low-lying sad, in some ways feeling a lack, is not the case. Nothing is set in stone.

How to Fall Apart by Liadán Hynes (published by Hachette Ireland) is out on May 7, 2020. Pre-order from Easons today. 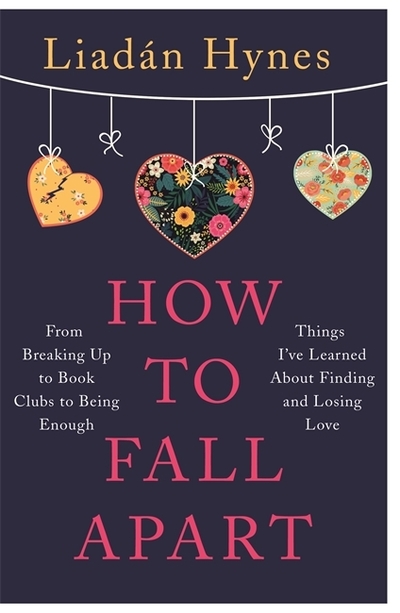 Read more: Starting over: How to put your life back together after divorce

Read more: The greatest loves of your life don’t always come in the shape of a husband

Read more: The books, podcasts and apps that helped me through a crisis