In what was one of the more bizarre stories to pop up over the past day or two, a civil rights leader in the United States has sparked outrage amid claims that she has ?falsely been portraying herself as a black person.? Those were the words from her Caucasian parents who said that their daughter Rachel Dolezal’s heritage is Czech, Swedish, and German, with possible traces of Native American.

Rachel Dolezal, who has identified herself publically as African-American for years via her social media accounts and through her work, has been the president of the Spokane, Washington, chapter of the NAACP since January and serves as the chair of the city’s police oversight commission.

When her parents spoke to media outlets, they said: ?She’s clearly white as we are,? adding that their daughter ?has not explained to us why she has disguised herself and been deceptive about her ethnicity.?

The claims have sparked outrage online with some saying it’s a clear case of ?ethnic fraud,? and others saying that, similar to Bruce Jenner’s transition into a woman, Rachel should be allowed to identify as whichever ethnicity she chooses. 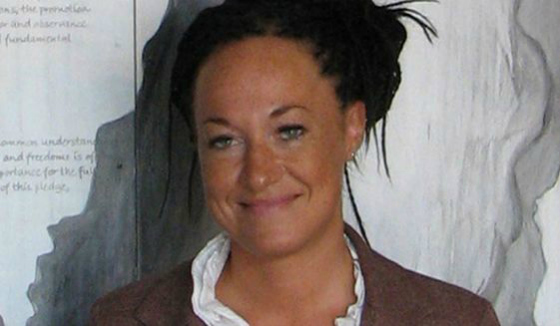 Her parents said their daughter had adopted black siblings and had attended school in Mississippi, where her social circle had primarily been African American. She later married and subsequently divorced an African American man, they said.

They claim that she began to adapt her appearance following her divorce in 2004. ?Rachel has wanted to be somebody she’s not. She’s chosen not to just be herself, but to represent herself as an African American woman or a bi-racial person and that’s simply not true and it’s wrong that she’s deceiving people,? Ruthanne Dolezal (her biological mother) said.

Rachel has since said that she isn’t in contact with her biological parents because of an ongoing lawsuit and that she “dosen’t consider them her real parents.”

When questioned about her racial ethnicity in an interview, Rachel refused to answer the question, saying: ?I feel like I owe my executive committee a conversation,? she said, adding that the subject was a ‘multilayered issue?.

?The question is not as easy as it seems,? she added. ?There’s a lot of complexities – and I don’t know that everyone would understand that. We’re all from the African continent.?

She later said that she “understood” people may feel she had been guilty of misrepresentation.

“It’s more important for me to clarify that with the black community and with my executive board than it really is to explain it to a community that, quite frankly, don’t really understand the definitions of race and ethnicity,” she said.

“I don’t like the term African-American, I prefer black. So yes, I do consider myself a black person,” she added.

Celebrities such as Cher and singer Keri Hilson have tweeted about the matter and the social media outlets have gone crazy over the whole thing:

@mollystripes im not saying u CAN,But Even though I don’t know What her choice was based on,I’m not going 2 Judge her.Throw the 1st Stone

I'm not sayin she doesn't have serious ISSUES, I'm just sayin don't knock her intentions or discredit her efforts. @NAACP stands by her work

We don’t really know what to think about this, but it’s a complex issue for sure.

What are your thoughts?