Beautiful woman at the spa wearing a facemask - beauty concepts

Planning a mini-break this summer? Blow away the cobwebs with a restorative staycation, says Lucy White.

The mama of all Irish spa resorts, Monart is a purpose-built, adults-only shrine to holistic health, boasting 2,500 square metres of knot-busting spa facilities. Here, guests pad around serenely in fluffy white dressing gowns, moving from one relaxation room to another, from myriad thermal suites and wet rooms to fitness studios, and onward to walking trails across 100 acres of the old Georgian estate’s private woodland.

The ‘spa experience? starts as soon as you cross the threshold of the resort’s glass walkway and segues into sculptural, almost space-age hallways, where luxurious rooms – and cumulus-soft beds – await. Contrary to some of the more austere, pleasure-deprived detox programmes, in which masochists ?eat? nothing but wheatgrass shots, Monart’s is nothing short of heaven: four nights all-inclusive at €1,095 per person, including lovely meals, accommodation, evaluations, a personal trainer and daily treatments and classes, among them reiki, reflexology, body wraps, massages and facials. There’s also a mini two-night version at €479 based on two people sharing. Couples and girl crews can also chill out with the Monart Spring Rejuvenation package, €249 per person sharing, which includes B&B, one dinner, one treatment, and is valid through May 31, monart.ie. 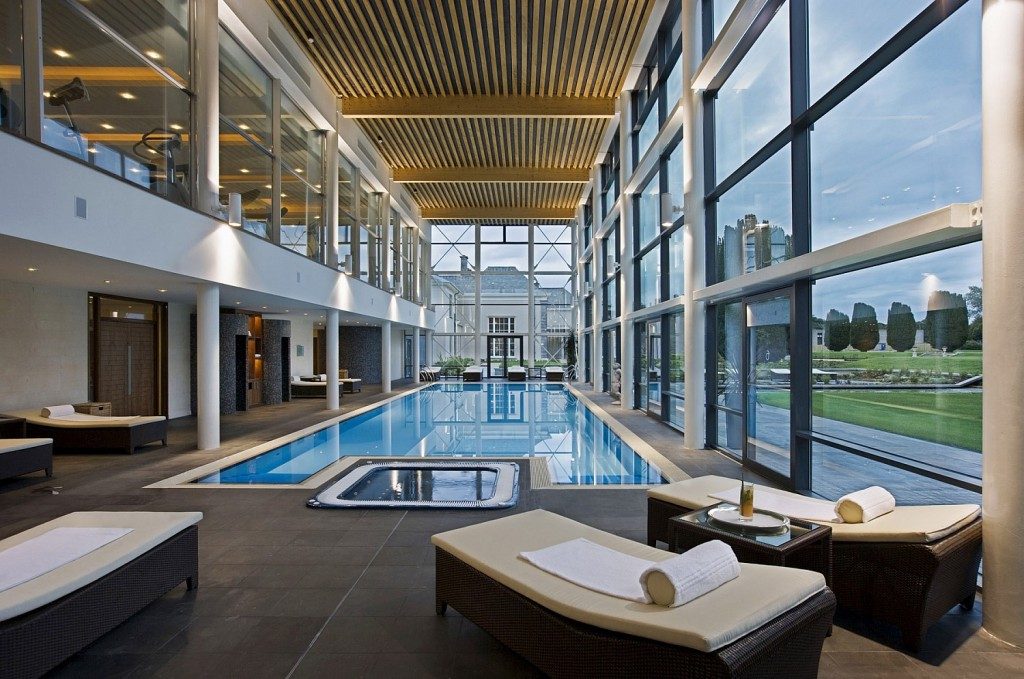 Where once was a castle built by the marauding Knights Templar is now a far more luxurious prospect: a wonderfully sprawling five-star?hotel dedicated entirely to fortifying one’s own spirits. In architectural terms, the 90-hectare resort’s centrepiece is its 17th-century manor that merges into contemporary, glassy guestroom wings. But its wellness facilities are the main draw for anyone wanting to unwind while overlooking elegant, landscaped gardens and woodland. The conservatory-style, 20-metre lap pool – bathed in natural light – is a far cry from the usual subterranean paddling pools, while there are more treatment rooms than you can shake a slipper at. Two-night B&B spa packages cost from €287 per night, including one dinner and a 50-minute treatment, or €344 for one night’s B&B, including one dinner and a 30-minute treatment. Rooms are spacious, ergonomic and catnap-comfortable, and the self-catering options, run by Natural?Retreats, are also terrific, not least the huge duplexes with three en-suite double bedrooms. Great for groups, and not least in summer when the outdoor decking and furniture beg to be adorned with a chilled bottle of Sancerre… castlemartyrresort.ie. 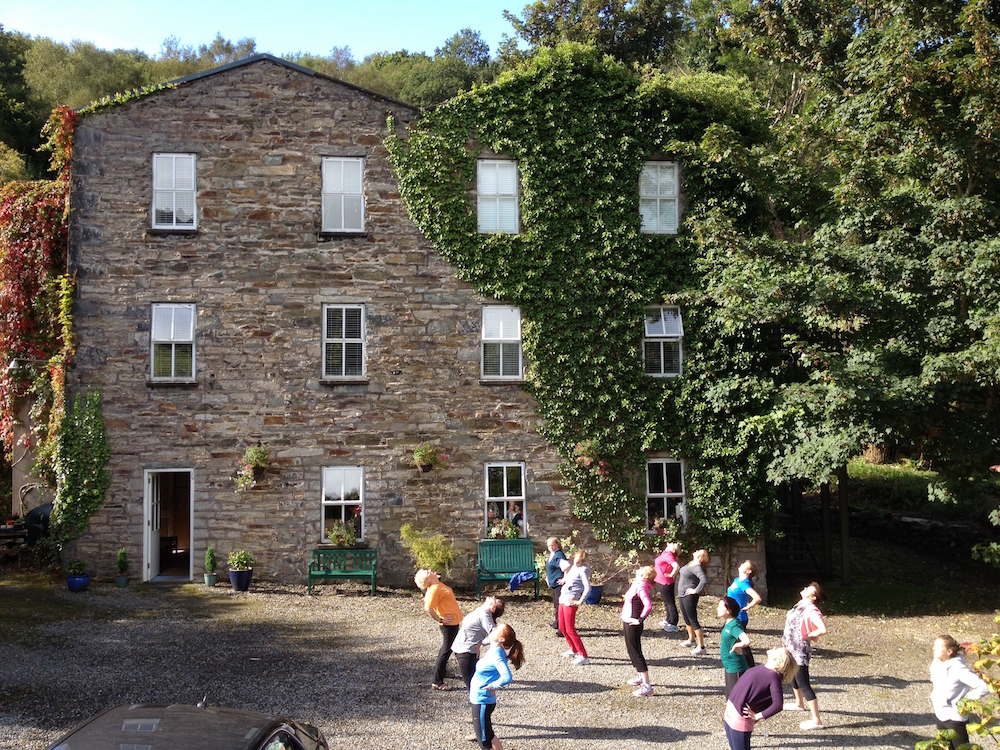 No pain, no gain? While Cloona Health Retreat doesn’t inflict physical injury on its visitors, only the truly dedicated will dare throw their smartphones to the wind for this multimedia-free refuge near Westport. There are no TVs, radios or newspapers to distract guests from that very serious business of mindfulness, a buzzword that has been integral to yogic practice for centuries, but that has been rebranded for a world addicted to the instant gratification of social and live media. Winter won’t ruddy up fatigued cheeks, nothing will.

While under the expert tutelage of Dhara Kelly, expect to put focus?instead on your mind and body via daily meditation and yoga classes, guided country walks, juice fasting, massage and saunas, with five- and three-day retreats from €640 and €430 respectively per single room/ shared bathrooms (from €790/?520 for en-suite rooms). There are optional extras, too, such as reflexology, shiatsu, facials and life coaching to help restore your own factory settings. Visitors are encouraged to come alone, to really get the full benefits of Cloon’s baggage-free tranquillity; however, there is a double and a twin room for those joined of hip and eager to kickstart a healthier lifestyle as a pair, cloona.ie. 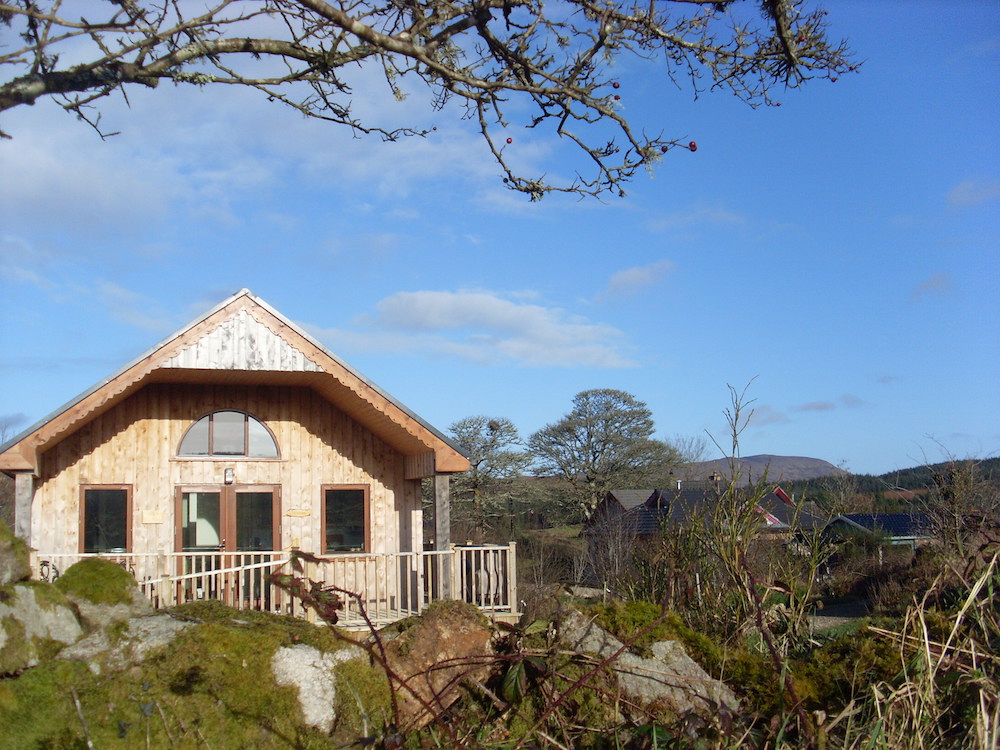 Not so long ago, cows grazed on 22 acres of land on which stood a few dilapidated farm buildings. But since 2001, this little slice of mindfulness near Dromahair village has been extolling the virtues of yoga, meditation, crystal healing and more, from a lavishly repurposed barn. And its husband-and-wife owners, Noeleen Tyrrell and Brendan Murphy, aren’t just playing wholesome lip service either: Ard Nahoo’s smart eco cabins – with fully equipped kitchens and welcome packs of necessities, such as tea, coffee, milk, bread and cleaning products – are made from sustainable cedar and hemp insulation, and heated with pellet stoves. Couples/pals looking to chill out in such a dwelling are welcome to stay for a minimum of two nights from €300, adding on spa treatments, hot tub access and yoga classes. There are even alternative hen packages for women who wouldn’t be seen dead in a phallic headband, and also ‘me time? tariffs for solo travellers wishing for true peace and quiet. And for the most devoted of holistic practitioners are guided yoga and detox retreats all year round, where guests can do as many sun salutations as they like until the cows come home. Literally?ardnahoo.com. 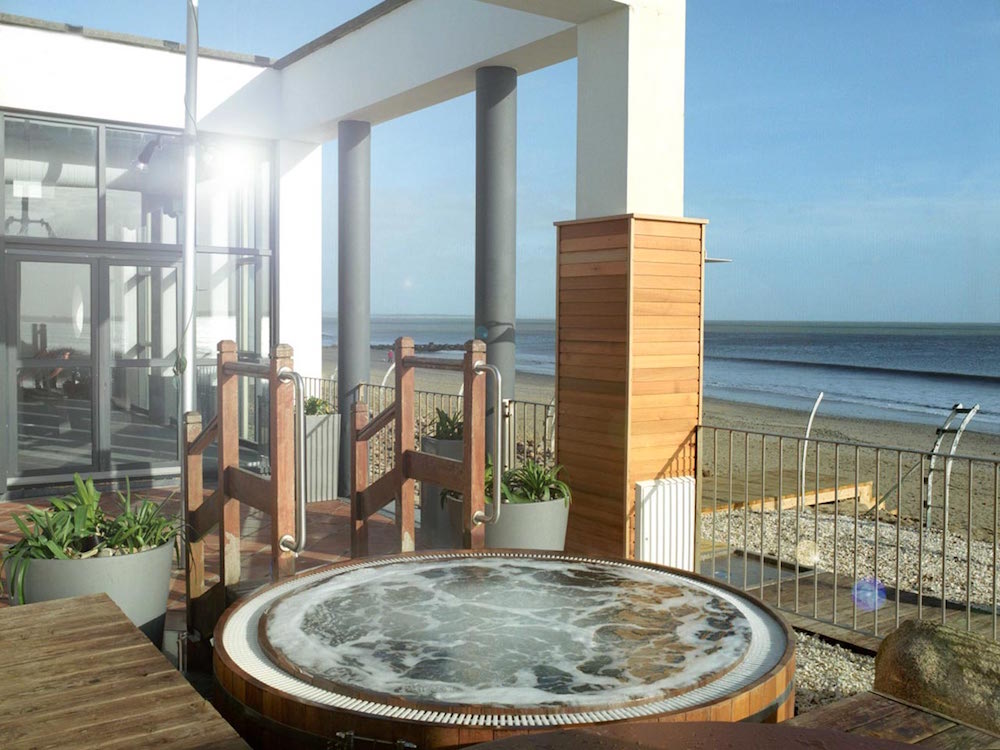 The benefits of the mineral-rich sea are centuries-known, and at Kelly’s is a double whammy of oceanic goodness: not only is this Rosslare hotel posited slap-bang on a sandy beachfront, it also has a heated thalassotherapy seawater pool in its comprehensive spa. There are also mud chambers, seaweed baths, vitality wet rooms and treatments galore – and never underestimate the power of a heated lounger when temperatures are in their single figures outside. That said, if a walk along the beach, or a nearby game of golf or horse riding, in?winter won’t ruddy up fatigued cheeks, nothing will.

There’s an arsenal of spa treatment packages all year round, aimed at both the casual day-tripper and the hotel resident (from €40), but the Overnight Midweek Indulgence could be well worth playing hooky for: B&B, €165 per person, including dinner and a one-hour spa treatment. Kelly’s is also great for families dying to decompress – it has a kids? club (a joy for both parents and?children) and also really lovely self-catering facilities rocking a contemporary nautical vibe. Indeed, the hotel’s vivid colour scheme and aspect are guaranteed to kick any winter doldrums to the curb, its soft furnishings, original artworks and swathes of natural light injecting brightness into a commonly overcast period, kellys.ie.