Let’s be real, DJs can be a pretty intimidating?bunch. They’re just?a cooler brand of human than any of the rest of us, plebs, can ever hope to be. And this is when we’re sober, never mind when slightly overly refreshed in the depths of the night.

We’ve all been that soldier trying desperately to look poised as we amble over to the DJ booth at a wedding holding out hope against hope that they’ll take pity on our pop-loving, mainstream hearts and play our request.

DJ: *Turns head slowly as if my Bieber-requesting basicness is causing him actual physical pain.*

Me: “Ehhh, will you play… (at the last minute I wuss out of The Beeb)… Black Betty by Ram Jam.

Me: *slinks away to hide over by the table of cheese to eat my feelings of deep uncoolness*

However, what we have just learned from FiveThirtyEight.com is that, in fact, the DJ is doing the bride and groom’s dirty work. Apparently banning songs from wedding dance floors is a thing and, in fact, some artists are considered so abhorrent that their entire catalogue?is off limits. Natch, my beloved Beiber is high on the list of contraband artists, being banned from an average of 6% of weddings.

Other unpopular artists?include Backstreet Boys, Rihanna and Bruno Mars – who ARE these couples???

The other route couples can take is banning an entire genre such as country music, which is loathed by some 10% of couples, so?no Garth Brooks *sob*.

These Are The 10 Songs Most Commonly BANNED From Wedding Dance Floors: 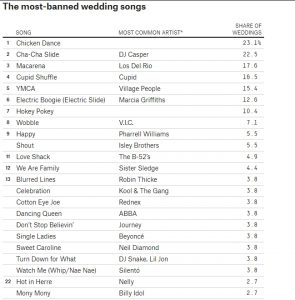 What do you think? Is banning songs from weddings a bit extreme? Or have you filled your life quota of Cotton Eye Joe at this stage?