Irish fashion boutiques in a pandemic: The Harlequin Vintage on deciding to go online-only

‘We just want visibility on the street and access to our shop.’ A Dublin shop...

Kim Kardashian on her divorce: ‘I always thought being lonely was totally fine’

You don’t have to love football to have been affected by the tragic scenes at...

10 Christmas Markets Worth Flying To

Bratwurst and coffee for breakfast, waffles with hot chocolate for lunch, mulled wine paired with gingerbread for afternoon tea and perhaps a burger washed down with a beer for dinner? Yep, pre-Christmas diets tend to stay on the plane when that whiff of cinnamon and sausage fills the air, and too right! This festive feasting is also perfect fuel for that whizz, or slow grappling around an ice rink. This rambling from stall to stall, all wrapped up (because let’s face it, most European places are freezing this time of year), and pausing from time to time when a sparkling tree trinket catches your eye, has almost become a prerequisite Christmas activity as writing a Santa list. But with most cities and towns creating these temporary wooden shed villages how do you decide which one will create that perfect magical moment? This list of European hot – not being the operative word – destinations might help. 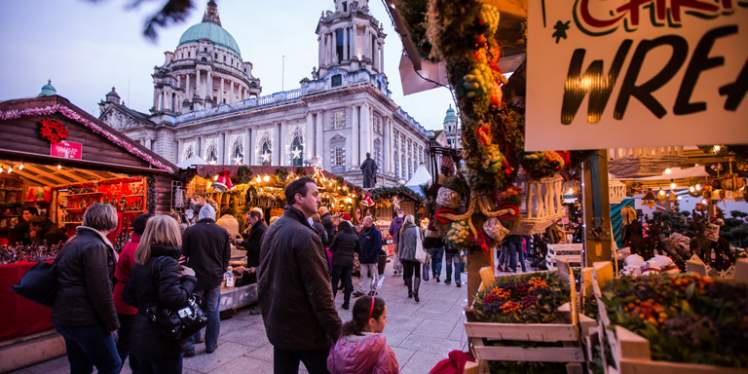 Outside City Hall is the place to be if you want to pick up a present or three. With tempting handbags, wooden toys, painted pottery and a trillion trinkets for sale, you might not even need to shop the high street. Don’t forget to visit Santas Grotto for a photo and if letters are posted from here, you’ll receive a written reply from the man himself! Go hungry if you want to sample some local loveliness with food from far-flung places on offer too.

“Chestnuts roasting on an open fire” may pop into your head as you pass many nut stands. The main attraction in this Hungarian haven has to be the hot spring pools in the Szechenyi Baths. Imagine that toasty feeling of sinking into warm waters after wandering through the tack-free stalls in the crisp, cold air. Or, pop on the swimwear for a boozy time at one of Lukacs Bath Pool Parties. The huge ice rink in Budapest Park and the special Streetcar number 2 ride covered in thousands of LED lights will make for photogenic pit-stops, and help work up an appetite for the continuous nibbling opportunities. 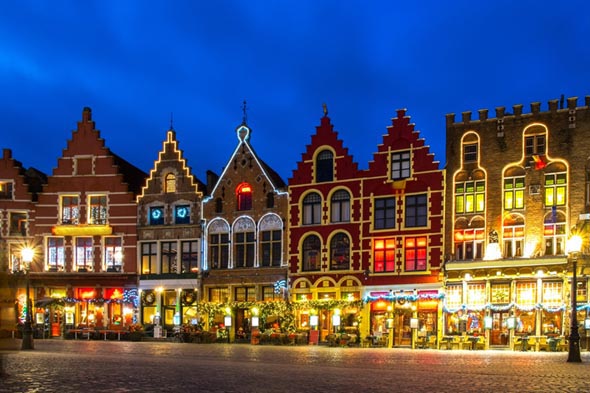 Colin Farrell and Brendan Gleeson may have gone on a killing spree, but the only thing you might murder in is this cosy, medieval town is a few Belgian beers. The traffic-free cobbled streets surrounding the market square make for relaxed strolling, necessary to marvel at the glowing buildings. Meandering through the stalls may prompt a chocolate coma but take a whizz around the ice rink or sit back for a historic canal boat tour and digest it all.

Fancy ice-skating around Melville Monument, St Andrews Square is just one of three spots turning into all things Christmasy. 60,000 light installations will have the Royal Mile beaming as The Virgin Money Street of Light, a new addition this year, has commissioned local choral music synchronised to the 19-metre-high light canopy. If that’s not enough, take a seat on the 60-metre high Star Flyer for a 360-degree view, sample gastronomic treats galore, book entertainment in the Spiegeltent and Santa Land boasts a childrens’ market. Did we mention there’s also a Christmas tree maze? Sold! 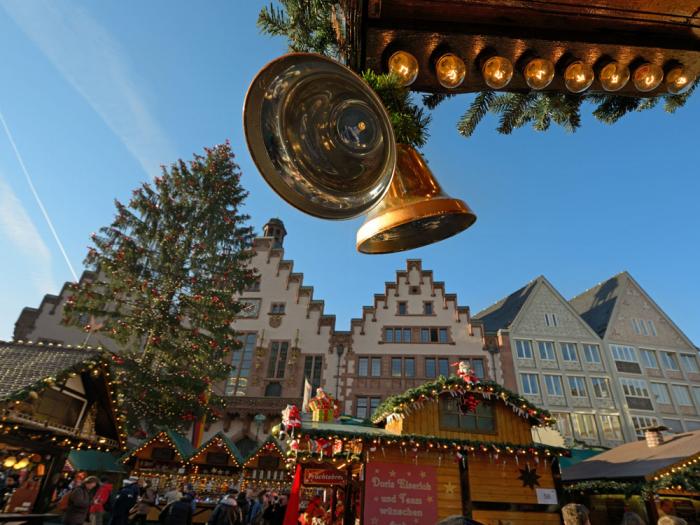 Hailed as one of the largest in Germany, you’re likely to never pass the same wooden hut twice. Word of warning (speaking from Christmas market newbie experience a few years ago), if time is precious and two hours sitting in Starbucks warming up doesn’t sound enticing, wear your warmest attire. However, if thermal leggings and wooly socks are forgotten, the Luthern church makes for a cosy thawing-out session while being entertained by carols. The Gluhwein is worth the trip alone.

Resist the other temptations of the city and make Hyde Park your priority as Winter Wonderland is more than just food trucks and Christmas trees. It is likely you’ll need more than a day to soak it all up with Zippos Christmas Circus, the Magical Ice Kitchen, a Giant Wheel, Santa Land, an Ice Bar and the large Ski Zillertal ice rink named after the world’s largest skiing valley, along with over 200 Bavarian style stalls to try. Bring the children, or just bring out that inner child in you. 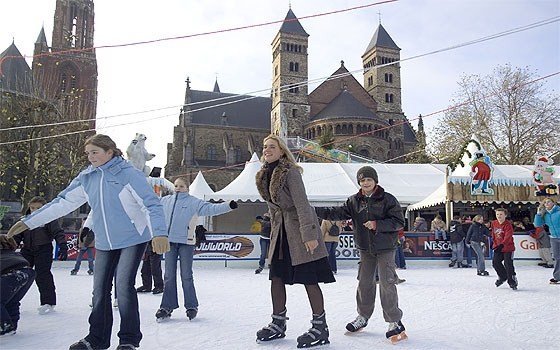 If smaller-scale sauntering, appreciation of light-art and fine food takes your interest then ‘Magical Maastricht‘, the oldest city in Holland, is note-worthy. Local cuisine and crafts don the wooden chalets in Vrijhof Square with the ice rink and big wheel enhancing the atmosphere. Split by the Meuse river and surrounded by hills, burning off some of the market meals or Michelin-starred delights is possible by cycling up to one of the nearby sites. Nothing says Christmas like castles. 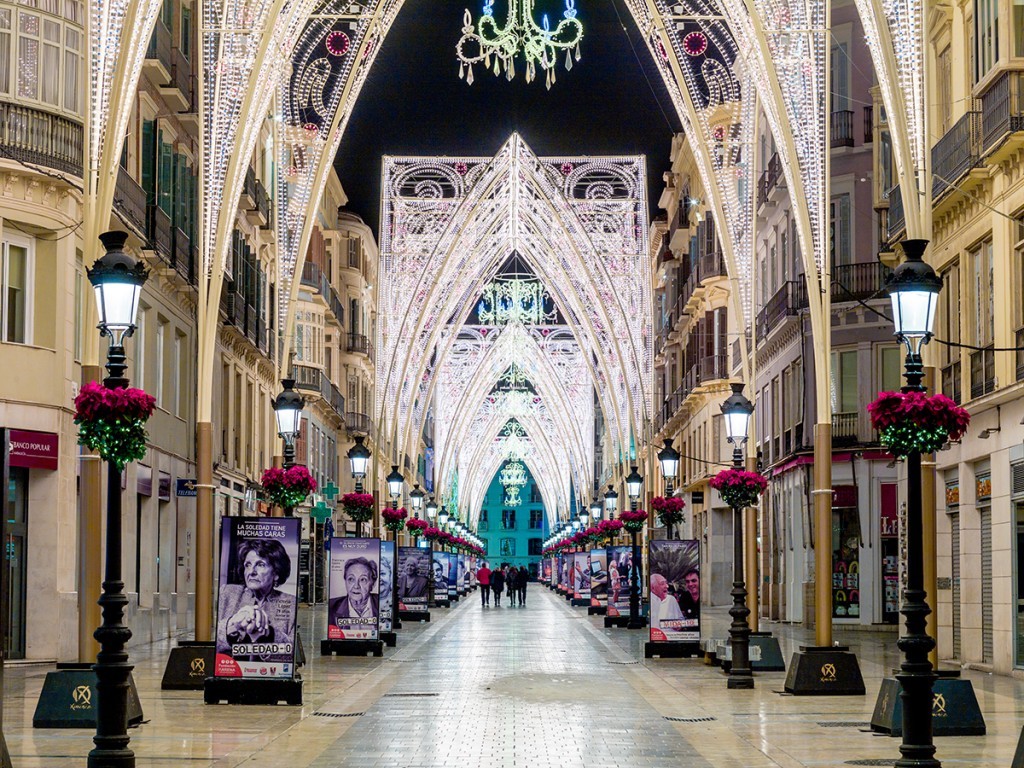 Thermal underwear isn’t necessary at this one. Nope, a light jacket and maybe even sunglasses are all that’s needed to marvel at this Spanish festive fiesta. The large port and interlocking streets make for perfect purveying of home-grown goods and tasty bites. And if roast potatoes excite your gut, then be wary, you are never far from a mouthwatering morsel. It is Instagram central with Moorish and Roman architecture and the influence of former resident Pablo Picasso. Step inside Casona del Parque for the most spectacular crib. 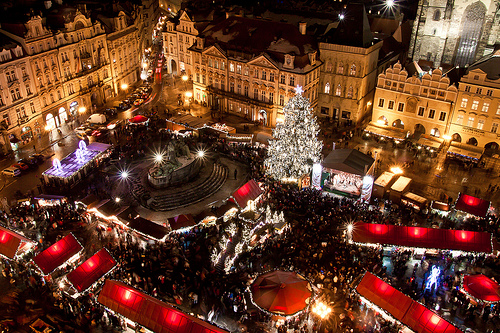 Be serenaded by angelic school children while savouring a Trdelník – a hot sugar coated pastry, or visit animals in the stable. Along with hams on spits, all the traditional, festive feel-good finds are in the Old Town Square, Wenceslas Square and surrounding streets with impressive Christmas trees and lights. Continue the magic into the evening with a performance in an ancient church or grand concert hall, or party Czech style. Whatever your preference, it’s likely to be here. 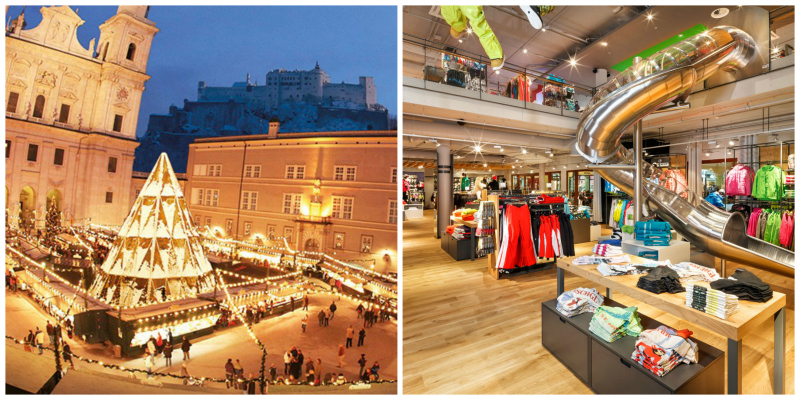 The hills may be alive with the sound of music, but so is this generously sized Christkindl Markt at Cathedral and Residence Square. What’s its special feature? Christmas wishes can be inscribed at the gingerbread baking station and sent immediately by balloon to the Christ Child in the sky! If traditional crafts and clothing aren’t the only gifts you’re after, pop into McArthurGlen Designer Outlets (in walking distance of the airport).There’s plenty of browsing, and the Intersport Brundl sports a tube slide from the first floor to ground floor.

Floatels: Boat hotels around the world we’re dreaming of checking into